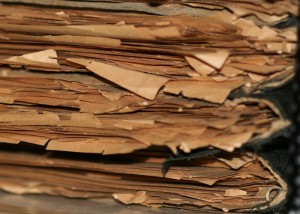 Not long ago print newspapers were filed in enormous folders, placed in metal cabinets and stored in the basement of newspapers.  They gathered dust and were a fire hazard, but there were few other ways to store them.  In the digital age methods of archiving newspapers may be more sophisticated but they are still imperfect and, according to new research, important online data is being lost.

Key questions about the way digital content can be preserved and archived have only recently been asked, four decades after newspapers began storing news digitally.

Kathleen A. Hansen and Nora Paul, of the University of Minnesota, looked at ten news organisations and their archiving processes. Nine of these organisations were legacy newspapers and one was digitally native.

Their report: “Newspaper archives reveal major gaps in digital age” identified a number of problems in the way online records have been kept since digital archiving began in the 1990s.

In the legacy system the method of storing newspaper archives in folders, reference books or on microfilm was unsatisfactory. Content stored this way eventually deteriorates or can get lost or misfiled, especially when organisations close, merge, or change hands.

But digital storage seems to be just as problematic: neither legacy news organisations or those “digitally-born” have clear policies for archiving and preserving online resources, according to the University of Minnesota study. There is evidence that data has been lost, including a Pulitzer finalist’s 34-part investigative journalism series.

“Digital information itself has all kinds of advantages….. except when it goes, it really goes,” said Jason Scott, an archivist and historian for the Internet Archive. “It’s gone gone. A piece of paper can burn and you can still kind of get something from it. With a hard drive or a URL, when it’s gone, there is just zero recourse.”

The University of Minnesota study had a number of key findings:

Digital preservation is important to understand because newspapers play an important role in our society, politically and commercially, documenting the history since the nation’s founding. This rich history is at risk, given the current trajectory of digital news preservation. As time moves forward, digital data continues to be lost

The Atlantic recently addressed this issue of digital preservation by examining how a Pulitzer-prize finalist’s 34-part series of investigative journalism articles vanished from the web. Read the story of one reporter’s work to resurrect his project.

Also important is the work of the Journalism Digital News Archive (JDNA) at the Donald W. Reynolds Journalism Institute. In response to the current state of the news industry, it established the world’s first digital curator of journalism position and explores the best practices to archive and access content and resources.

The article “Newspaper archives reveal major gaps in digital age” (pp. 390-398) appeared in the September 2015 special edition of the Newspaper Research Journal called “Capturing and Preserving the First Draft of History in the Digital Environment.” For the abstract of the article, go to: http://nrj.sagepub.com/content/36/3/290.short

Jenny Dean is a doctoral candidate at the University of Oregon. Previously, she was a news designer in Charlotte, NC, and Jacksonville, FL. In addition to design work, Jenny filled in as a business section editor, writer, and photojournalist and had a recent photo essay in the Minneapolis Star Tribune. She interned at the Poynter Institute’s Visual Edge workshop and worked as a teaching assistant in graphic design (Syracuse University) and broadcast journalism (University of Colorado Boulder). Jenny’s research interests include digital media, credibility of information (particularly as it applies to the Internet), citizen journalism, media audiences, and visual communication.
» Digital News, Short stories » Storing – Or Losing – Digital...