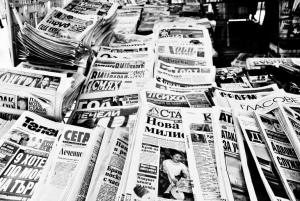 Stefan Antonov, a Wincott Foundation fellow from Bulgaria at the Reuters Institute for the Study of Journalism, has written an exhaustive account of the political, economic and media situation in his home country. His recently published research paper, entitled The Age of the Oligarchs: How a group of political and economic magnates have taken control of Bulgaria is the first attempt at a systematic review of the Bulgarian oligarchy and its role in the political and economic governance of the country.

Stefan writes: Many researchers try to answer the essential question why in Eastern Europe there are still so many underdeveloped countries. Many of them blame the weak institutions, the corruption, and the lack of legitimate representation of the public. Some call the situation in Bulgaria “state capture”, which is a form of political corruption in which private interests significantly influence a state’s decision-making processes to their own advantage. Such “state capture” can be achieved in many ways in different countries.

In my paper I try to show how this happened in Bulgaria. I point out some of the concrete weaknesses of our institutions and the mechanisms used by wealthy people to influence political and economic governance. I call these people ‘oligarchs’ and explain how exactly their influence achieves disproportionate defence of their interests at the expense of the wider public interest.

This hinders income growth, entrepreneurship and the democratic development of Bulgaria.  I go further and claim that Bulgaria is now more like Russia, and this happened after it joined the European Union.

Only in this type of a country can the government publicly interfere in the free market and use all of its power to crush companies from a whole sector in order to increase the profitability of one particular company.  It is not only the left-oriented parties, or the right-leaning parties. We see a political class constantly seeking ways to monetise its power with growing aspirations to interfere in the private sector.

After giving concrete cases studies of how this works, I provide a systematic review of why things go wrong and how they can be repaired.  I put forward some necessary measures for strengthening Bulgaria’s institutions and the freedom of press so the media can better inform and educate the public.’

Stefan Antonov is a former business journalist at Economedia, Bulgaria and former Journalist Fellow at the Reuters Institute for the Study of Journalism, University of Oxford.
» Media and Politics, Research » Research: Bulgaria’s Media Oligarchs