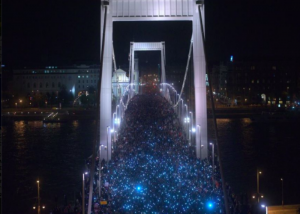 The ruling party in Hungary, Fidesz, has persistently tried to transform public-service television into its propaganda tool, but seen rather perverse results. The more TV programmes played to the Fidesz tune, the less people watched it. The audience share of the news bulletins of public-service broadcasters is now lower because the public shifted to private broadcasters in search of less biased news.

Now it has been reported that the ruling political elite is trying to “colonise” private broadcasters too.  Andy Vajna, is set to purchase Hungary’s second-largest commercial television channel, TV2.  A close ally of Fidesz, Vajna, the Hungarian government film commissioner and gambling magnate, is closely linked to Hungarian Prime Minister Viktor Orbán and other high-ranking Fidesz politicians.

Students of Italian media will not be surprised at this. Silvio Berlusconi was equally determined to control both public and private television in his years of political “glory”. The difference is that Hungary is still a very nascent democracy, and a very fragile one at that. So far, we know very little about the media in the numerous new democracies around the world except sporadic outbreaks of anger from NGOs specialised in media freedom.

Most of the related academic work focuses on the the United States, Great Britain, or Germany, even though the new democracies lack the socio-economic conditions and institutional structures that characterised the evolution of media in the Anglo-Saxon world.  How is power being mediated in new democracies? Can media function independently in the unstable and polarized political environment experienced after the fall of autocracy? Do major shifts in economic and ownership structures help or hinder the quality of the media? How much can new media laws alter old journalistic habits and political cultures? And how do new technologies impact the construction of the media and democracy?

A sizeable international group of researchers grappled with these questions for several years with the help of the European Research Council, the London School of Economics, and the University of Oxford. They conducted over three hundred interviews with politicians and practitioners in Central and Eastern Europe, but also in other parts of the world. They also took part in numerous brainstorming sessions featuring academics, journalists, and media owners. The results of this huge endeavour have just been published by Oxford University Press.

The new democracies that are investigated in this book represent a variety of what sociologists call ‘glocalism’: homogenisation and heterogenisation coexist, revealing hybrid models and multiple modernities. It is local culture that assigns meaning to global and regional influences. Ideal liberal models and best practices are being promoted and aspired to, but these models and practices are being adopted in opaque ways.  Local practices and regulatory schemes may well be creative and better suited to local environments than the imported blueprints; however, they do not live up to the liberal normative standards taught at departments of journalism and politics.

Politicisation of the state represents one distinctive and often troubling feature identified in new democracies. ‘Business parallelism’ represents another common feature, with some media owners actively engaged in politics and in business at the same time. Media ownership in these countries is far from sufficiently transparent, and is instead quite fuzzy. Journalists are often underfunded, poorly trained, divided, and disoriented. All this makes it difficult for the media to act as independent and unbiased providers of information.

Law was the key “lever” used to make politics and the media in new democracies functional, accountable, and fair. However, some of the adopted laws have generated outcomes opposite to those intended, while others have been by-passed by political and economic entrepreneurs. In fact, one of the most important findings of this book points to the assertion of informal rules and institutions over formal ones. In principle, informality is not necessarily a bad thing for democracy and it is not a synonym of corruption. However, informality represents a problem for democracy if and when democratic laws are not being implemented or when democratically elected representatives are being manipulated by informal networks. Informal practices and networks gain importance when the state is weak, political institutions are underdeveloped, and the law is full of loopholes and contradictions. As a result, actors without democratic legitimacy secure unjust, disproportional, or even illegal advantages on behalf of particularistic interests. The rule of law is replaced by the rule of informal ad hoc arrangements, orchestrated by people who have no accountability operating in a mode of “dirty togetherness”. This is often the case in new democracies where autocracy collapsed in a chaotic and obscure manner, producing surprising winners and losers both in terms of wealth and access to political decision-making.

Around the world people risk their life demanding political pluralism and media freedom, transparency, and the equal treatment under the law. This is how democracy is being born. However, new democratic institutions and constitutions are not able to instantly change long standing cultural habits, curb economic manipulation, and soften political brinkmanship. Understanding the complex and often corrupting interdependencies between the media, politics, law, and economics that are scrutinized in this new book can help new democracies persist and possibly flourish.

Media and Politics in New Democracies: Europe in a Comparative Perspective, Edited by Jan Zielonka

Jan Zielonka teaches European Politics and Society at the University of Oxford. He is Professor of European Politics and Ralf Dahrendorf Fellow, St Antonys College. His main research interests are in the field of European Integration and Disintegration, Geography of Power in Europe, Return of Empires, European Foreign and Security Policy,Media and Democracy in Europe.
» Latest stories, Media and Politics » “Dirty Togetherness”: Press, Politics And Power...