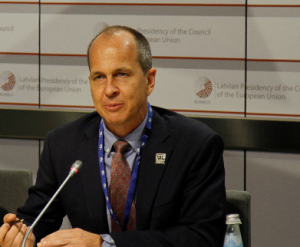 Peter Greste is an experienced journalist who has worked in conflict zones for more than 20 years. In 2013 he was arrested, with two other Al Jazeera journalists, in Egypt. They were charged with ‘damaging national security’ and spent 400 days in a Cairo prison. The three were recently released on bail, after diplomatic and public pressure.

The case is still ongoing. Although Greste has left Egypt, the two other journalists, Mohamed Fadel Fahmy and Baher Mohammad, are not allowed to leave the country.

Greste travelled to Riga, Latvia to mark World Press Freedom Day 2015 on May 3. He told UNESCO’s Youth Newsroom that believes press freedom has deteriorated since the start of the ‘war on terror’. This is an extract from that interview.

YN: How far are you willing to go to protect the freedom of press in developing countries?

PG: I think, I will probably stop short of getting arrested again.

What do you understand by words “freedom of the press”?

To me freedom of the press really means the ability of journalists to work and report, to explore the work of governments, without any kind of hindrance, without any kind of legal restraint. It means the ability of the press to do his job as a watchdog. The problem is that most governments particularly don’t like that role, it means that we are able to look into the work of the governments, to keep up the public conversations, but also to keep the public eye on the work that governments do.

There’s a tendency to assume that they are in charge of running the country, when in fact they are the representatives of people who elect them. They work for us, not the other way round! As the public we need to have a very clear oversight of everything that government does. I understand that there are always security concerns with this, and governments can’t be 100% transparent because of the issues over security. But I think press freedom is being limited because of the war on terror.

So I think the freedom of the press means the ability of the press to really look at just about every corner of the government with a fairly small restraint over security issues.

Did you have any illusions about freedom of the press before you were sentenced to seven years in Egypt?

I don’t think I had illusions. I always knew it was difficult. In Egypt I knew that Al-Jazeera had a difficult relationship with the government. I have worked in a lot of countries across Africa and elsewhere, where press freedom has been a major issue. Where we haven’t been able to work freely, we’ve been very limited in the work we do; we have been under very heavy government pressure. Likewise I’ve seen the freedom of the press [threatened] even in Australia. But I’ve certainly got a very real sense of what that meant when we were arrested.

What motivates journalists like you to work right in the middle of the hotspots of the world?

For me there are couple of things. The first is that I believe in what we do, I think that what we do is important, it has value. It’s important for people to know what’s going around the world. But on a personal level… I also believe that we need to shine a light to help inform the agencies, to support agencies that are trying to work in those areas, to resolve those conflicts.

I think we need to know what’s going around the world, but also from a personal level it is an extraordinary fascinating thing to do. We are all interested in the extremes of what humans get up to. And nothing gets quite so extreme as those kinds of environments, as those kinds of conflict zones. I think that’s probably one of the key motivators. The part of our job as journalists is the excuse to be able to indulge your curiosity, to stick your nose into other people’s business.  Extreme environments give you the chance to really see what pushes people in those kinds of places.

There are people who want to become correspondents in hotspots, what should they realize before they choose your profession?

It’s dangerous, it can be very dangerous. One of the problems is that I think security and safety is a major issue, probably the biggest one of all. People want to work in dangerous environments; they’re interested for the reasons which I just outlined. They want to know what’s going on in those places, they want to endanger themselves by operating in conflict zones, they want to indulge the curiosity just as I did. But the way that media is working at the moment tends to push freelancers into those environments and [they] push themselves quite hard to trying get the stories that they think clients will want.  These organisations find it very expensive, very difficult and very risky to deploy their own correspondents into those areas. And for young students like yourself there’s a tendency to think: “If I go to a hotspot, I’ll be able to make a name for myself, I’ll be able to sell the story and come back with a really good, strong story, a human story, dramatic story, great pictures and I’ll be able to establish a reputation for myself and get a decent job.”

The problem is that too many freelancers wind up in very dangerous places without either the right kind of training and experience, or the institutional backup that they need from news organisations, such … body-guards, security, body-armour or first-aid kits. [They do not] have the escape routes that they need to get out of trouble or someone they can call if they find themselves under arrest or in a serious situation. Anybody can get killed, the most experienced journalists can find themselves getting killed, arrested or seriously injured. But the danger is far higher for freelancers that are pushing the limits, because they want to get a decent story or trying to cut the corners, because they want to save money.

For all of those reasons it can be extremely dangerous. I’m not blaming these guys for what happened, but it’s worth noting that James Foley, Steven Sotloff and Kenji Goto, the three journalists who were murdered by Islamic State last year In Syria, were all freelancers. We just need to be very careful and very mindful of that risk.