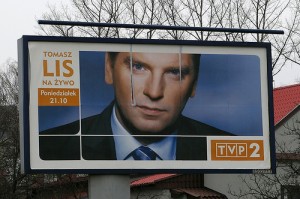 New research raises the question of whether an integrated culture of journalism exists in Poland.

Election season is a challenging time for reporters, a time when the duality between objective reporting patterns conflicts with the desire for politicians to supplant favorable content about their own election campaigns into mainstream media.

This type of confrontation, seen mainly by the masses in the form of public debates, has become the domain of television journalists, collectively described by Walery Pisarek as “the summit of journalism’s professional hierarchy.”

In a recent study, University of Wroclaw researcher Piotr Piskozub conducted a content analysis (quantitative and qualitative) of two television programs, focusing on content broadcast during the 2010 Polish presidential campaign. The two programs, Tomasz Lis na zywo hosted by Tomasz Lis, and Warto rozmawiac hosted by Jan Pospieszalski were chosen due to their larger-than-average viewership, which places them among the most popular programs of their kind in Poland.

Both hosts are journalists recognizable by most citizens (Wieslaw Godzic defines Lis as a “forced celebrity,” noting the interest of tabloids who write about his personal life). Lis and Pospieszalski participate in mainstream press and radio projects, however with the caveat that they will only engage in media projects which contain a distinct program policy. Considering this perspective, Lis and Pospieszalski can be defined as representative figures for specific sections of domestic journalism. The purpose for conducting the content analysis was to confirm or falsify the hypothesis that a relatively integrated journalism culture exists in Poland. The additional hypothesis was based on the variances between several journalism subcultures, which differ not only in their views on social and political issues, but also in their description of the appropriate standards of labor and ethics in journalism.

Sixteen total broadcasts were included in the content analysis, seven episodes of Tomasz Lis na zywo and nine episodes of Warto rozmawiac. Data was gathered by coding the dominant features of each journalist’s statements (suggestions, emotionality, value judgments, mixing features of colloquial style and political vocabulary, etc.), while also coding statements made by the host (unilateral, bilateral, neither), and retention of  principles of impartiality and objectivity. Even if the discourse in the studio assumed a sequential dialogue between the host and his guests, the most important elements of content were statements that had been prewritten by a journalist and implanted into the discussion.

In Pospieszalski’s program, statements were marked for value judgments (23.3 percent) and emotionality (16.7 percent). Both hosts also conducted their broadcasts by mixing features of their own colloquial styles and political vocabulary (Pospieszalski 6.7 percent, Lis 3.8 percent), which allowed journalists to reduce the tension between politicians in the studio. While the statements made by Pospieszalski were found to be more theoretically diverse, the host of Warto rozmawiac made calculated judgments concerning his broadcast method in order to create an emotional, if not ethically abnormal atmosphere in the studio.

In analyzing the principle of sustainability, which refers to the arguments used by the hosts, it was noted that 43.3 percent of Pospieszalski’s statements were based on unilateral rhetoric, with only 6.7 percent on bilateral rhetoric. Lis referred to both sides of the political confrontation in 52.6 percent of cases. Regarding the principle of impartiality, a distinct factual advantage of the statements made by Lis existed with 80.8 percent including objective content.  In contrast, only 33.3 percent of Pospieszalski’s statements were deemed objective. Overall, Lis is more effective in presenting himself as a high-level journalist compared to Pospieszalski.

The last criterion considered in the context of professionalism in journalism was the use of emotional statements (based on the pathos, tragedy, or on open support to one option), and relating to conspiracy theories. When comparing the use of these types of messages, the content analysis revealed that 30 percent of the dialogue spoken by the host of Warto rozmawiac was formulated in an emotional way, with 20 percent of the content relating to conspiracy theories.  In comparison, the host of Tomasz Lis na zywo avoided these statements entirely, failing to make emotional or conspiracy-related comments throughout the program. When the journalists spoke in an emotional way or cited conspiracy theories, they failed to live up to a high standard of quality and professional journalism.

It is worth mentioning that both hosts have generated support within two different circles of journalism.  Lis is affiliated with “progressive” journalists who maintain liberal worldviews while Pospieszalski aligns himself with colleagues attached to traditional forms of journalism. Journalistic integrity is certainly vital, but both circles of journalism are valid and can be implemented simultaneously. This phenomenon is positive because it creates diversity in media.

However, as the results presented in the content analysis have shown, varying styles of journalism can create radically different perceptions of reality due to the use of different methods for description and explanation of events. Journalists cannot be responsible for a specific group of citizens; their role is to adhere to the expectations of society as a whole. This dissonance should increase the level of ethics in journalism rather than lead to the stratification and confrontation of standards by different groups of journalists. Therefore, the existence of several journalistic subcultures in Poland is a phenomenon with a variety of advantages and disadvantages. The crystallization of a more complete future within the journalism culture in Poland will depend both on external factors (such as the digitalization of media), and redefining the roles and tasks of journalism in a dynamic media reality.