Online Anonymity: Is It Possible And Are We Ready For It? 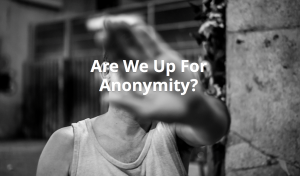 What is anonymity in the hyper-connected and hyper-traceable online world and does it have any value?

The controversial issue of anonymity in the post-Snowden world and the way it is usually represented was discussed during a session at the Mozilla Festival in London on 7 November, entitled “Are we ready for anonymity?”  Moderated by Magdalena Taube of the Berliner Gazette and Francis Tseng of the Coral Project, participants discussed the value of anonymity online.

The privacy that non-identity provides can foster freedom of speech and protect individuals from oppressive governments and regimes. Anonymity is also a safeguard from peers, providing the freedom to say things without being defined by a name, gender and other preconceptions that might be associated with identity. In journalism anonymity is the cornerstone for sources and allows whistleblowers to come forward and expose wrongdoings.

However, anonymity is often framed through a dark lens, as a way for hackers, trolls, terrorists, peadophiles, and criminals in general, to act undisturbed. This has prompted governments to raise higher barriers against anonymity, via policy and legislation.

But is anonymity on the Internet possible, given all the ways our online interactions are traced and stored? How easy it is to break the chain of our communications? Perhaps anonymity is just a utopian dream.

Studies suggest that online privacy is an ongoing concern. Research by Global Web Index found that 27% of adult online users had utilised a virtual private network (VPN) to access the internet and six in ten people surveyed said they believed the internet is eroding their personal privacy.

The inspiration for the session at MozFest came from a workshop organised by the Berliner Gazette on October 22-23, under the umbrella of the related UN|COMMONS conference. The three-day event, run in Berlin, brought journalists, activists and researchers together to focus on “those resources that are being privatised or made inaccessible, but which could become common property in the future – commons that are as yet uncommon.”

As part of this event, a project, entitled “Are we up for anonymity?” developed a collaborative storytelling workshop around this issue.

It looked at how anonymity works in practice, with examples from Belarus, a country ranked 157 out of 180 on the World Press Freedom Index. Two media organisations that cover some of the same topics and aim to promote civic engagement and activism take opposing approaches to anonymity.  The Minsk city digital magazine, CityDog, focuses on the personal stories behind city heroes, and therefore values the personal touch of by-lined journalists. However, another multimedia magazine, 34Mag – also based in Minsk – relies on the anonymity of journalists. This policy follows the forced closure by the authorities of 34Mag’s hard copy magazine, Students’ Thoughts Magazine, in 2005, and the subsequent arrest of its then editor-in-chief.

The “Are we up for anonymity?” project, which was developed on WordPress and is licenced under Creative Commons CC BY NC SA, also provides an anonymity toolkit with advice on encryption tools like Virtual Private Network (VPN) and TOR or privacy-friendly search engines like DuckDuckGo.

Federica Cherubini (@fedecherubini) is an Italian journalist and editorial researcher based in London. For the past five years she’s been working for the World Association of Newspapers and News Publishers (WAN-IFRA) on several projects dedicated to explore the future of journalism and newsrooms around the world. She was one of the three researchers behind the project “Monitoring, moderating and managing online comments: towards best practice”, funded by the Open Society Foundation.
» Media and Politics, Short stories » Online Anonymity: Is It Possible And...