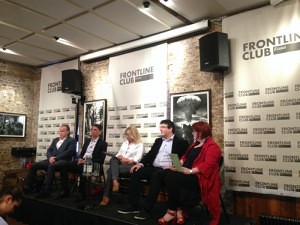 “Legal frameworks that protect confidential sources are under significant strain in the digital era,” according to Julie Posetti, a research fellow with the World Editors Forum and the World Association of Newspapers and News Publishers (Wan-Ifra). Posetti is the main author of a forthcoming UNESCO/Wan-Ifra study into journalistic source protection in 121 countries.  Preliminary findings reveal that targeted and mass surveillance are threatening reporters’ ability to keep their sources safe, and surveillance is becoming more frequent.

The study, “Protecting Journalism Sources in the Digital Age”, will reveal how source protection laws in the 121 surveyed countries are progressively being undermined or jeopardized as digital surveillance and mandatory data retention policies are exposing sources and whistleblowers to increasing risks. These aspects combined may have a chilling effect on investigative journalism itself – as already detailed by previous reports – whistleblowers may feel themselves at risk while speaking to reporters who, for their part, may opt for self-censorship to avoid trouble.

The study was based on in-depth online research, a survey of 130 international research participants and in-depth interviews with 50 experts in the field of source protection, including editors, investigative journalists, lawyers, academics, and civil society organisations. It reveals evidence of how a growing number of reporters changed their habits around communicating with sources, for fear of digital interceptions. Posetti said it is crucial that journalists get proper training in digital security, in order to protect sources.

Speaking at a panel discussion on source protection at London’s Frontline Club last night, Posetti recalled a recent case where the evidence provided by Der Spiegel of NSA surveillance against its own communications eventually led to the exposure of a source. The British GCHQ, as demonstrated by documents released by Edward Snowden, also engaged in reading the emails of journalists working for international news outlets emails, Posetti said.

To strengthen source protection worldwide, and working towards agreeing international standards for journalists’ communication, the report presents an 11 point framework of assesment. It is hoped these could provide guidelines for further discussion.

Barrister Gavin Millar QC, joined last night’s panel in London which was moderated by Paola Totaro, Foreign Press Association President.  The panel discussed how law enforcement agencies target journalists, to expose their sources. According to Millar, UK agencies are in the habit of bypassing judges before putting journalists under surveillance, as happened with the so-called Plebgate scandal, when RIPA, the anti-terrorism law, was abused.

This practice, which is against European and international law standards, is nevertheless becoming routine, Millar said. Journalists are gathering, collecting and communicating information and data of interest to authorities, Millar said. He  underlined the need for a comprehensive and clear shield law for British reporters.

Source protection is at the core of journalism

Jonathan Calvert, investigative editor of the The Sunday Times and author of one of the most important and recent Fifa investigations, gave the muckracker perspective on the subject. He said source protection stays at the core of journalism especially in the digital age and that journalists should be aware that there’s no such thing as 100% certainty and safety.

Paranoia can also act as a self-censorship facilitator, said Calvert, one more reason to welcome a law that “honours the relationship with our sources”.

Journalists should use technology to help protect sources

From the technology perspective, Paul Myers, BBC internet research specialist and The Internet Research Clinic founder, discussed different threat levels journalists may need to deal with while protecting online communications with their sources.

The risk, Myers said, could range from leaving IP tracks while visiting a website, to defending yourself from malicious cracker or malware (leaked Hacking Team example, for instance), to government surveillance or airport security seizure of hardware, as happened to David Miranda during the Snowden case.

In order to prevent these risks Myers said that journalists should view digital security as crucial and use technology to protect their sources where possible. He listed crypto safer tools – such as Blackphone, Tor, Tails or the Telegram app.

Posetti closed the discussion by stressing the need for stronger education in this field – to communicate the urgency and severity of the problem. She said it was crucial to keep pressure on governments to end illicit surveillance on journalistic communication and that journalists themselves should keep on reporting on this.

Fascinating insight from panel on the challenges faced by journalists to protect their sources #SaveOurSources pic.twitter.com/sMils8xbSR — Frontline Club (@frontlineclub) 7 Luglio 2015

Philip Di Salvo is a post-doctoral researcher based at the Institute of Media and Journalism of the Università della Svizzera italiana (USI) in Lugano. His main areas of research are whistleblowing, investigative journalism, internet surveillance and the relationship between journalism and hacking. At USI, he also teaches journalism at both the bachelor's and master's levels. Philip received his PhD in Communication Sciences from USI in 2018 with a dissertation on encrypted whistleblowing platforms in journalism. He is also a lecturer at Milan's Nuova Accademia di Belle Arti (NABA). As a freelance journalist, he writes about the social impact of technology for Wired, Motherboard/Vice, Esquire and other publications. Philip obtained a master's degree in Media Management from USI in 2012 and a bachelor's degree in Literature from Milan's Università degli Studi in 2010. He is the Italian editor of the European Journalism Observatory, based at the USI in Lugano.
» Ethics and Quality, Recent » New Study: Laws Protecting Journalists’ Sources...