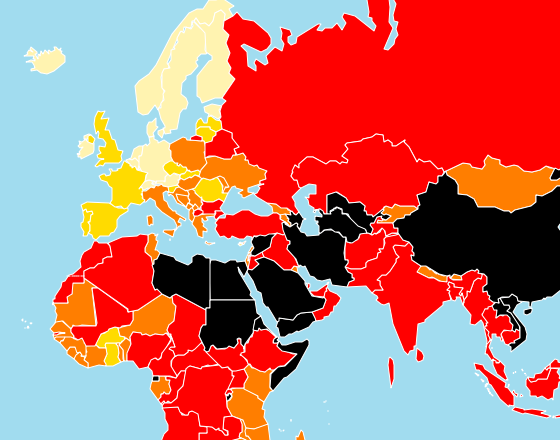 The 2017 Press Freedom Index map, published by Reporters Without Borders: Countries coloured black and red are lowest in the index rankings.

The 2017 World Press Freedom Index, published today, reveals that violations of the freedom to inform are no longer the prerogative of authoritarian regimes and dictatorships.

Once taken for granted, media freedom is proving to be increasingly fragile in democracies as well. With draconian laws, conflicts of interest, and even the use of physical violence, democratic governments are trampling on a freedom that should, in principle, be one of their leading performance indicators.

“The 2017 World Press Freedom Index compiled by Reporters Without Borders (RSF) reflects a world in which attacks on the media have become commonplace and strongmen are on the rise. We have reached the age of post-truth, propaganda, and suppression of freedoms – especially in democracies.”

This pattern is evident across Europe and also in the United States, according to the 2017 index.

UK and US fall in rankings

It reveals the United Kingdom has slipped two places to be ranked at number 40 out of 180 countries.  “A heavy-handed approach towards the press – often in the name of national security – has resulted in the UK slipping down the World Press Freedom Index. Parliament adopted the most extreme surveillance legislation in UK history, the Investigatory Powers Act, with insufficient protection mechanisms for whistleblowers, journalists, and their sources, posing a serious threat to investigative journalism. Even more alarming, the Law Commission’s proposal for a new ‘Espionage Act’ would make it easy to classify journalists as ‘spies’ and jail them for up to 14 years.”

The United States has also fallen two places, to 43, this year. The index cites attacks on the press, particularly since the beginning of Donald Trump’s presidency. “He has declared the press an “enemy of the American people” in a series of verbal attacks toward journalists, while attempting to block White House access to multiple media outlets in retaliation for critical reporting,” according to RSF.

Down: Hungary and Poland

Hungary, now ranked at 71 in the table, has fallen four places in 2017. This is due to Prime Minister Viktor Orban’s increasingly “tight grip” over the media since his re-election in 2010.

Poland has fallen seven places to rank 54th in the table. “Just weeks after winning the 2015 parliamentary elections, the conservative Law and Justice party passed a media law in December 2015 giving the government direct control over public broadcasting. It immediately used this power to dismiss those running the state radio and TV stations. After turning the state media into propaganda tools, the government tried to financially throttle several independent print media outlets (including Gazeta Wyborcza, Polityka and Newsweek Polska) by ordering all state agencies to cancel their subscriptions,” the RSF writes.


Ranked 16, Germany has remained in the same position as 2016 despite concerns that “journalists continue to be threatened and harassed by right-wing groups and demonstrators without police protection.” Italy is further down the table at 52. “The level of violence against reporters (including verbal and physical intimidation and threats) is alarming, especially as politicians such as Beppe Grillo of the Five Star Movement do not hesitate to publicly out the journalists they dislike. Journalists also feel pressured by politicians, and increasingly opt to censor themselves,” according to the index.

France, currently in the middle of a presidential election, is slightly up at 39. French media are generally free, according to RSF, but the index highlights ongoing concerns about media owners who are driven by commercial concerns leading to threats to editorial independence and the economic survival of some outlets.

Despite a rise of three places to number 46, Romania is also a concern: “Excessive politicization of the media, corrupt financing mechanisms, editorial policies subordinated to owner interests and intelligence agency infiltration of staff – such has been the impact of the media’s transformation into political propaganda tools, which has been particularly visible in election years,” the index writes.

Serbia is down seven places to 66; Bulgaria is at 109, although has moved up four places since last year.

Ukraine (109) and Russia (148) remain at the bottom end of the table. According to the index Russia has imposed: “draconian laws” and blocked websites while the pressure on independent media has grown steadily since Vladimir Putin’s return to the Kremlin in 2012. “Leading independent news outlets have either been brought under control or throttled out of existence. As TV channels continue to inundate viewers with propaganda, the climate has become increasingly oppressive for those who try to maintain quality journalism or question the new patriotic and neo-conservative.”

What does the index measure?

The Index ranks 180 countries according to the level of freedom available to journalists. It is a snapshot of the media freedom situation based on an evaluation of pluralism, independence of the media, quality of legislative framework and safety of journalists in each country. It does not rank public policies even if governments obviously have a major impact on their country’s ranking. Nor is it an indicator of the quality of journalism in each country.

The global and regional indicators

See the full report at Reporters Without Borders

You may also like: The Erosion of European Journalism, Free Speech Debate

Caroline Lees is the Head of Communications at the Reuters Institute for the Study of Journalism. She is the former editor of the European Journalism Observatory’s English language site. She is a British journalist and has worked for The Sunday Times, London, for seven years including time spent in Delhi as South Asia Correspondent and as a news reporter and arts correspondent. She has also worked as foreign editor and assistant editor of The Scotsman, and for the Economist and Telegraph Media Group.
» Media and Politics, Press Freedom » Threats To Press Freedom In Europe’s...