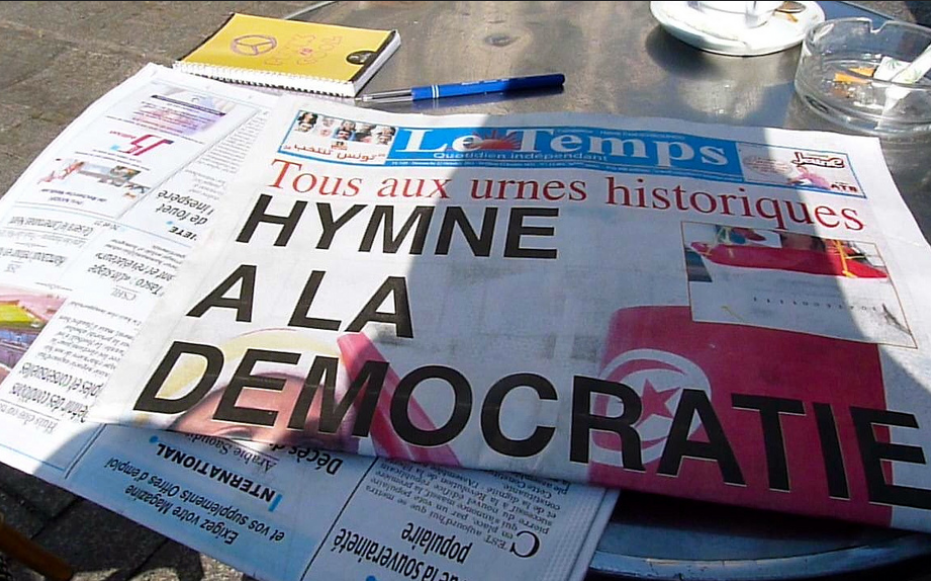 An edition of Le Temps, a daily French language newspaper published in Tunisa, dated October 23 2011, the day of the first democratic election following the Tunisian revolution.

After the 2011 Arab Spring protests, which ended Tunisia’s authoritarian regime, reforming the country’s media became a priority for the West. Representatives of European governments and international organisations hurried to Tunisia, aiming to strengthen its press. Six years on the motivation behind these apparently well-meaning programmes, as well as their relevance, has been questioned in new research.

In a recent paper Olivier Koch, of the University of Galatasaray, Istanbul, revealed that intervention by international media organisations, such as Canal France International, BBC Media Action and Deutsche Welle Akademie, was at least partially politically motivated. Allowing European countries to “multiply the links with potential influence relays” in Tunisia, their efforts were as much about exerting soft power in Tunisia as they were about empowering journalism.

Unsurprisingly, these foreign media initiatives were equipped with generous budgets. After 2011 unprecedented sums were released to assist Tunisia in reforming and developing its media sector. Alexandre Delvaux, founder of a group hosted by the CAPJC in Tunisia to coordinate foreign media assistance, estimated that 13 to 15 million euro per year was donated to Tunisia, compared to only four to five million euro for all other countries of the Middle East North Africa (MENA) region. The European Union alone doubled its spending, giving 10 million euro in 2015 to the Tunisian Media Support Programme, set up in 2004 with EU funding to train journalists.

A number of other international organisations, dedicated to producing legal, professional and ethical norms and standards in journalism, opened active representations in Tunis after 2011. Apart from UNESCO and the Council of Europe, international NGOs such as Article 19 (UK) and RSF (France) which specialise in the codification of standards on freedom of the press and the protection of journalists, also set up regional offices. Other organisations specialising in media development and capacity building for journalists, such as IMS (Denmark), Free Press Unlimited (the Netherlands), Hirondelle (Switzerland), BBC Media Action, and CFI (France) followed and soon supported most of the training programmes in Tunisia.

But why were European funders and organisations willing to spend such vast sums after the revolution? According to Koch the needs of the Tunisian media itself, in terms of technical and financial support, were not always a priority. Instead, the objective was to raise Tunisian media standards and practice – repressed under Zine El Abidine Ben Ali’s regime –  to those of democratic countries. This objective was similar to that of Western powers towards Eastern European media after the fall of the Berlin Wall in 1989.

The negative effects of European aid

However, the undesired effect of these international support programmes has become increasingly evident. First, a level of “saturation” was quickly reached in Tunisia’s limited media market, which operates with fewer than 1500 journalists and a limited number of media firms. Besides, many Tunisian media managers, especially in the private sector, found the training programmes offered were invasive. As a result, many made it hard for their staff to attend.

Evidence also suggests that the support and training programmes were largely ineffective. Olivier Koch found that more than half of the participating Tunisian journalists felt the programmes failed to address the realities of journalism in Tunisia, a sentiment shared by a majority of the foreign trainers who admitted that they knew little about the situation on the ground.

Koch’s study, based on interviews and surveys with journalists and journalism trainers working in Tunisia between 2014 and 2015, found that: “54.3% of participants felt that the contents provided were not adapted to the national context.” This is confirmed by the trainers themselves: 82.3% of them admitted knowing nothing, or very little, about the realities of journalism in Tunisia. Many trainees  questioned openly (during group sessions) or in the interviews, the decontextualised nature or the  inadequacy of training.


A major factor which exacerbates the country’s reliance on foreign aid is the absence of a public structure responsible for media governance in this ongoing period of “transition to democracy”.

The National Forum for Reform of Information and Communication (INRIC), set up in March 2011, self-dissolved in July 2012. Apart from the High Independent Authority of the Audiovisual Commission (HAICA), an independent body mandated with regulating the broadcast media sector, no governmental organisation is tasked with overseeing the media sector. This failure of the state even extends to the preparation of legal texts on the media sector, which were supported by international organisations.

It is worth noting here that while some organisations have been ineffective in providing support for Tunisia’s media, not all efforts were fruitless. For instance, the Council of Europe, Article 19 and BBC Media Action provided precious expertise in creating a new legal framework as well as support for HAICA, the broadcast media regulatory body.

For example, Article 19 took the initiative to organise a series of meetings and consultations on the draft law to replace the 2011 press code, while BBC Media Action and the Council of Europe assisted HAICA in preparing a draft law on audiovisual media.

But the lack of domestic public funding for training and media reform support programmes currently leaves foreign cooperation as the only option. Without state support for a reform of the media system, Tunisia will remain dependent for a long time on European aid, which provides expertise considered by many beneficiaries to be inadequate and “decontextualised”.

You may also be interested in After the Arab Spring: Two (Different) Press Councils

Dr Abdelkrim Hizouai is Professor of Media Regulation at IPSI, the Tunisian public school of media and communication, and Director of the Arabic Journalism Observatory (AJO).
» Comment, Media and Politics » Comment: Media Aid? Or International Politics?