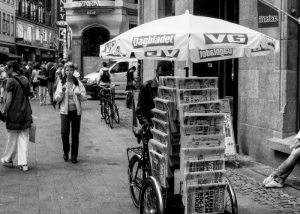 Denmark’s latest general election was held on the 18th of June and, as always, the news media’s coverage of the event was a subject of public debate. Especially two points: the first, was the question of ‘the presidentialisation’ of the election campaign; the second was whether coverage was slanted to favour either the social democratic government or the liberal/conservative opposition.

In academic theory the presidentialisation of politics thesis argues that democratic political systems are starting to operate more and more according to a ‘presidential logic’, irrespective of their formal constitutional make-up.

In Denmark, presidentialisation has been found to be most significant with regard to the news media’s increasingly personalised way of covering politics. Ten parties campaigned for 179 seats in the Danish Folketing (parliament) during the election, however, from the first day leading newspapers and the two public service televisions stations framed the election as a duel between the social democratic Prime Minister, Helle Thorning-Schmidt, and the leader of the opposition, Lars Løkke Rasmussen.

The framing of the election as a ‘presidential election’ between just two of the ten party leaders made it very difficult for the other party leaders to be heard in the news media, as our analysis below also shows.

The second point of public concern, relating to the news media’s potential political bias, stems from the history of the Danish media system and its strong links between political parties and newspapers, a link only severed from the 1980’s and onwards.

But despite the fact that Danish newspapers now exist and act independently of their former political ties, there is still a belief that Danish media, including the two public service television stations, who by law are required to be politically un-biased, are indeed politically biased.

In the end the election results raised a number of questions about the media’s focus on the election as a ‘presidential’ election. Lars Løkke Rasmussen won the election, but his party lost ten seats in the Folketing. Helle Thorning-Schmidt and her party won new seats in the Folketing, but is no longer in government. Also an entirely new party was elected, and the Danish Peoples Party, which got a lot less media attention than Lars Løkke Rasmussen and his party, is now the second biggest party in Denmark.

The study covered all election news items in the media mentioned below from the 28th of May to the 18th of June. A total of more than 9000 news items.

Mark Blach-Ørsten is professor, Ph.D. in journalism at Roskilde University. His current research is on media ethics, media accountability and the quality of journalism.
» Media and Politics, Research, Short stories » Research: Media Coverage Of The Danish...