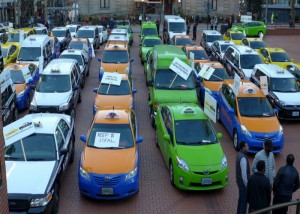 Journalist Paul Mason recently published a controversial column in The Guardian arguing that we are entering a “post-capitalist” society, prefigured in the numerous examples of the so-called “sharing economy” that seem to be sprouting in all economic sectors.

In his article, Mason, Economics Editor of Channel 4 News, attributes the foreseen abolition of capitalism to the advancements in technology that make work unnecessary, and to the information abundance that prevents markets from forming prices in a correct fashion. The first is a technological problem, but the second is strictly an information problem.

The same idea has been thoroughly outlined by various media theorists through the years. For instance, Yochai Benkler, Berkman Professor of Entrepreneurial Legal Studies at Harvard Law School, delivered a short talk in Davos this year warning of the disruption of the “firm” and the dangers of the “sharing economy”.


So, what’s new about information technologies that disrupt the market as a central element of the capitalist mode of production? As has been argued elsewhere, when you combine digital technologies with networked flows and information pervasiveness, you almost inevitably get a declining economic value of information. This explains why so many media companies are experiencing insurmountable difficulties implementing viable business models around the production and distribution of news.

The combined effect of the digitalisation of information that renders it manageable by computers and algorithms, of the flexibility, interactivity and convergence of all media that is permitted by even our tiniest pocket computers (otherwise known as smartphones) and of the networked effect of always having an infinite number of possible connections available, is the abundance of information, and therefore the decline of its economic value.

The social value of information

The really interesting paradox – that drives the “post-capitalism” thesis – is that those changes that imply the declining economic value of information also suggest the increase in its social value. We establish social relations through communication and therefore the abundance of information (and information and communication technologies) allows us to assemble more and new forms of social capital.

Those characteristics of the digital information and communication technologies that explain the declining economic value of information – the network effect, the digitalisation/computerisation, the flexibility/interactivity and the convergence in a single device – are the same that allow us, as individuals, as groups and as a community, to extend the reach and depth of our ability to mobilize social resources. Therefore to increase the social value of information.

Will the “sharing economy” replace the market economy?

This is most notorious in the way Google or Facebook threaten the established business models of the traditional media, but it is also visible in the way Uber threatens the taxi industry, the way Airbnb challenges the accommodation industry or the way in which Alibaba short-circuits the usual commerce channels.

None of these companies is a traditional operator: Uber owns no taxis, Airbnb has no lodgings and Alibaba owns no stores. What they do is operate a platform – a set of digital information and communication tools – that allows people to easily mobilise available social resources (i.e. social capital).

Of course Uber is a capitalist company making a profit from that mobilisation of social resources. But – as Paul Mason rightly notes – we should see beyond that and recall how Altavista was once the pre-figurative form of what Google is now.

Waze – another company owned by Google – is currently experimenting in Israel with a service called RideWith. It overtly states that no commercial exploitation shall be made by the users and that the service’s only goal is to share costs between users.  That is the next logical step in a post-capitalist direction, driven by the digital information and communication technologies that allow it to exist.

Is this really “post-capitalism”?

So, is this really a pre-figurative form of what Mason calls “post-capitalism”? The problem with these concepts: “capitalism”, “post-capitalism” and “socialism” – is that they are all very politically charged. If we think of capitalism as no more than a particular social and economic arrangement (with its institutions, its rules, its uses and values) for the coordination of a complex ensemble of social activities, then of course that particular arrangement will be challenged by the transformations brought by digital information and communication technologies and the way they are used by people.

In may not be the end of capitalism just yet. But it sure looks like the beginning of something else.

This article was first published on the EJO Portugal website

José Moreno is Multimedia Director at Motorpress Lisboa, a publishing company, where he is responsible for the development of new digital information products and services. He has a degree in Social Communication from ISCPT-UTL and a master in Communication, Culture and Information Technologies from ISCTE-IUL. He studies issues related to information and communication digital technologies and its social implications. He is married, father of two boys and lives in Lisbon, Portugal.
» Digital News, Media Economics » Information Becoming More Socially Valuable (As...