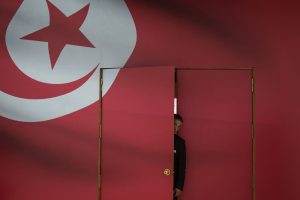 Opening the door to the media centre for Tunisia’s Parliamentary elections.

In the aftermath of the ‘Arab Spring’, two Maghreb countries are developing different styles of press regulation. In Tunisia, the outcome is likely to be a self-regulated Press Council, whilst in Morocco the project is implemented by the government.

The aim of both countries is to reform their media systems and move closer to the standards of  Western democratic countries.  For Tunisia and Morocco, long subject to a tradition of state media censorship, self-regulation is an attractive prospect. Press Council projects are currently being discussed in both countries to serve similar needs, but from very different political perspectives.

Tunisia’s protests in January 2011, the so-called Jasmine Revolution which ousted the president, opened the way for a democratic Republic, enshrined by the constitution of January 2014.  The proposed Press Council is an offshoot of professional organisations and civil society.

Morocco, in contrast, has kept its monarchy, but King Mohammed VI has had to concede reforms to retain control. There, press regulation reform is being implemented by the Ministry of Communication, and this has led to criticism by independent organisations, such as the Morocco’s Centre for Media Freedom (CMF- MENA), in Casablanca.

The project to develop a Press Council in Tunisia began in 2012 with the support of Article 19, a British international organisation which champions the idea that freedom of expression is a basis for good governance.  It was decided the Press Council should not be a public body created by law. There was deep concern among media professionals and human rights organisations about anything that risked becoming – or sounding like – a Ministry of Information with state control over the press.

The challenge was to create a body with more power than an NGO without being a public entity; a body efficient and able enough to take responsibility for self-regulation and to establish a system for monitoring ethics throughout the media, including broadcasting.

The project’s initiators were inspired by the successful model of the Belgian Council for Journalism, an independent body for self-regulation of the Flemish press in Belgium.  It was founded by journalists and media publishers and is funded half by the journalists’ union (which receives a subsidy from the Flemish community to help cover this) and half by media publishers and audiovisual companies.

The Belgian Council is then recognised by the government as the sole body responsible for monitoring ethical compliance within the industry.

This formula has the advantage of ensuring the Council is publicly funded, without threatening its independence. But public funding has to be kept under 50% of the budget, with the professional organisations providing the rest.

It is envisaged that the structure of Tunisia’s Press Council will be tripartite, with representatives of journalists, publishers and the public. The National Union of Tunisian Journalists and the Tunisian Federation of Newspaper Directors have already begun the process of creating an association which will eventually lead to the Council.  All that remains to finalise the project is to get the new press code,  which mentions the creation of a Press Council, adopted by parliament.

An encouraging sign of progress is that, according to the Press Freedom Index released on 20 April 2016, Tunisia is the country which has jumped highest in the rankings – up 30 places to 96. 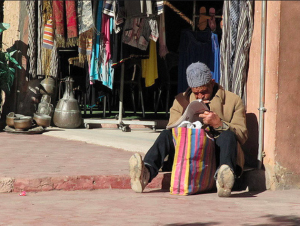 Catching up with the news, Morocco.

Morocco: the Government will do it for you

The situation in Morocco is decidedly different.  The Ministry of Communication has decided to handle the consultation process about its National Press Council project itself, together with the National Union of the Moroccan Press (SNPM) and the Publishers’ Federation (FMEJ). A draft law was approved by the specialised Commission of the Moroccan Parliament in December 2015.

The draft law defines a series of tasks, the most important of which are: to act as mediator and arbitrator in disputes between professionals; to issue press cards; to rule in disciplinary cases related to accusations of professional dereliction of duty, breaking the code of ethics or the rules of procedure; to advise on draft laws and decrees submitted by the government; and to propose appropriate measures for the development of the media sector.  As in Tunisia, the Press Council itself should be composed of representatives from publishers, journalists, and the public. The Moroccan Press Council is a public body, created by law, and is publically funded.

Morocco’s plans have been criticised by human rights organisations on a number of points, including the lack of any public consultation; they say the Press Council concerns the whole of society.  Another potential stumbling block is that the Council  would encroach on the powers of the Ministry of Communication, which currently issues press cards. And critics point out that, as yet, there is no indication the new Press Council would be responsible for drafting the code of ethics. In Tunisia the new Press Council will be expected to draw up a code of ethics as its first task.

Establishing a media self-regulation system is therefore proving difficult for a country which – currently ranked 131 out of 180 countries on the Press Freedom Index – has some way to go to improve its press freedom.

Dr Abdelkrim Hizouai is Professor of Media Regulation at IPSI, the Tunisian public school of media and communication, and Director of the Arabic Journalism Observatory (AJO).
» Latest stories, Media and Politics » After The Arab Spring: Two (Different)...