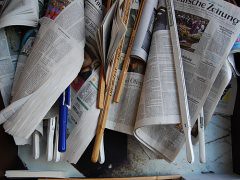 The U.S. media crisis delivered a crushing blow to many newspapers. In Europe, an increasing number of print publications hang in jeopardy, yet European publications may not be threatened by the same disaster as those in the States.
Thus, we must ask the critical question: Do we in Europe need to brace for similar developments? It seems logical that the media crisis should follow a different course in Europe than in the United States. Though we’ll have to come to grips with the same technological innovations, there still remain cultural differences in dealing with them.

The American newspaper industry was  in deep crisis long before the fiasco of the banking and financial sector peaked in the fall of 2008. According to Dean Singleton, CEO of MediaNews Group, 19 of the 50 largest U.S. newspapers were already in the red early in the summer of 2008.

The Project for Excellence in Journalism’s yearly report offers a strikingly grim prediction for the future of media, suggesting that the newspaper business is nearly “in free fall.” Perhaps a few parachutes may open, but according to the report, the crisis rolls on with no end in sight for the third year in a row.

Journalists themselves are having difficulty dealing with their own desperate situation. Coverage of the media crisis certainly adopts a tone different from reports dealing with mad cow disease, bird flu, SARS and swine flu. For the last nine years, researchers at the Annenberg School of Communication combed the pages of 26 large American newspapers in addition to the news broadcasts of several large American TV networks.

First, Michael X. Delli Carpini, dean of the Annenberg School of Communication, told the New York Times that reporting during this period focused primarily on the deterioration of print media, despite the fact that TV news and daily papers in the U.S. registered a comparable decrease in circulation. Researchers uncovered 900 articles dealing with the decrease in print circulation and a mere 95 on the subject of dwindling audiences for TV newscasts.

The skewed ratio for television reporting is similarly extreme. Thirty-eight reports covered the newspaper calamity and all of six discussed the nosedive in TV news ratings. Unfortunately, researchers didn’t  keep tabs on how many swine flu reports these same newspapers and TV networks broadcast – although the imbalance should be clear to anyone with a little imagination.

Additionally, of the 26 newspapers examined, only three addressed the issue in more detail – the New York Times, the Washington Post, and the Wall Street Journal, predictably.  Together they contributed nearly half of the total sum of articles.  As for the TV networks, only cable networks CNN and Fox provided the majority of contributions.

Comparable data for German-speaking countries is hard to come by, however a scanning of articles from the major newspapers suggests that the media crisis was nearly ignored compared to the American financial crisis, which had smoldered for months before the failure of Lehman Brothers ignited the media frenzy in Europe last fall.

Süddeutsche Zeitung, for example, buried the bad news in a sub-heading: “Paper tigers: American newspapers remain non-influential in the election campaign. Their financial situation becomes precarious” (11/7/2008). The Frankfurter Allgemeine Zeitung offered the truthful-yet-conciliatory: “Gloomy prospects for American newspaper publishing houses” (10/3/08). The Neue Züricher Zeitung initially reported a “strong decrease in circulation of U.S. newspapers“(10/29/08). A week later, however, it offered as a new version “Carnage among western media “(11/7/2008). Still vague, this was much more to the point. However, journalists collectively dealt with the topic not as the “blood hounds” of the information society, but rather as some odd variation of ostrich and lemming.

Where do developments in America and Europe differ substantially? What justifies the assumption that the crisis will pan out differently in Europe than in the U.S.? One might consider the enormous differences in newspaper content. For instance most German-language newspapers aren’t as pettily fixed on local happenings as their American counterparts.

Communications researcher Miriam Meckel spent an extended period working in the U.S.  According to Meckel, “If you look at the American market, you’ll quickly understand why new media sites and blogs like the Huffington Post are successful. The newspaper landscape is so abysmal there’s plenty of room for something new.”

With the exception of the New York Times, the Washington Post and the Wall Street Journal, the depreciation of quality in large city papers like the Boston Globe, the Chicago Tribune, the San Francisco Chronicle or the San Jose Mercury News can be clearly verified. Meckel’s view, however, is tied to the here and now. The fact that the deplorable state of the news is a direct consequence of radical budget cuts is not included in her analysis of the situation. Only 10 years ago one could return from a visit to the U.S. with numerous examples of innovative American journalism.

In addition to choice of content, cultural differences among audiences may account for the dissimilar course of Europe’s crisis. For instance, it’s unlikely that Germany and Switzerland will turn out a culture of bloggers and citizen journalists as exhibited the U.S.. Even talk radio, still an enormous success in the U.S., was a huge flop in Europe. Media expert Peter Laufer believes the failure is due to the fact that Europeans, contrary to the very communicative Americans, are more reluctant to expose opinions in public. Laufer has a firm grasp on both cultures as years ago he tried unsuccessfully to establish talk radio in German-speaking countries.

Germany and many other European countries aren’t so politically divided. Europe lacks the record of collective journalistic failure as exists in the U.S.., when nearly all forms of media succumbed to the spin of the Bush administration in its crusade against Iraq. Presumably, the mainstream media in Europe is not met with the same intense distrust present among the young, Internet-loving generation of Americans.

Finally, print media in Europe never had the same dependency on advertising as in the U.S. In general, 35-50 percent of financing is derived from subscription and street sales, while even in the good years, the daily papers in America generated only between 15 and 20 percent of their revenues directly through readership. In Europe, the media has not made the colossal mistake of putting everything on the Internet for free, as news can still be sold in printed form. The “backwards move” to paid online-journalism should therefore be easier in Europe.

There remains hope that the media in “Old Europe” will keep from becoming the plaything of private equity investors and speculators as was (and still is) the case in America. So far, at least, it seems unthinkable that investors like Sam Zell, who, with only $315 million of his own capital moved $8.2 billion to gain control over the Tribune Co. (which includes the Chicago Tribune and the Los Angeles Times). As part of the deal he was able to pass on the burden of debt to the pension funds to his employees.

On the other hand: Do the Old and the New World really differ fundamentally where financial acrobatics are concerned? Who would’ve thought a year ago that rock solid state-owned German Landesbanken would, using tax payers’ money, run high-risk numbers in the U.S. real estate sector and investment banking?

According to Internet and media expert Clay Shirky, during revolutions the “old” often breaks down before the “new” becomes visible. Even revolutionaries can’t predict what will happen next. Harvard economist Clayton Christensen believes new technologies are “disruptive” and existing trends cannot be extrapolated to provide a more certain view of the future. Thus, it seems we must re-learn the basic lesson in economics – “There’s nothing like a free lunch.” In this world, a good lunch is generally not free. In the long run a sophisticated, intellectual menu will probably only be available on the Internet only if we agree to pay for it.

An opportunity exists for us to draw a creative and timely conclusion from the American predicament. This, however, will only be possible if journalists and media managers pay closer attention rather than simply burying their heads in the sand or moving about like lemmings.

European Journalism Observatory co-founder and until 2018 Professor of Journalism and Media Management at the Università della Svizzera Italiana in Lugano. Frequent contributor to Neue Zürcher Zeitung (NZZ) and Der Tagesspiegel (Berlin), as well as to the specialist publications Schweizer Journalist and Der österreichische Journalist.
» Media Economics » The Old World’s Fear