Journalists and the Hampster Wheel 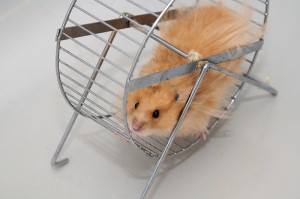 The cover story of the latest issue of the Columbia Journalism Review, “The Hamster Wheel,” penned by Dean Starkman, analyzes and openly criticizes the dominant model in contemporary journalism.  Starkman highlights a sort of perverse mechanism that he calls the Hamster Wheel, which he says tends to shape journalistic work around the principles that rule today’s market of on-line journalism.

The journalist is likened to a hamster cranking around a tiny wheel, racing for the sake of racing, without ever reaching a goal, without real objectives. Movement for movement’s sake.

Starkman’s criticism of journalism focused on speed and quantity stems from a very simple consideration: over the years, he says, the number of journalists has decreased while the amount of news published increased.  A phenomenon that transversely affects the entire publishing industry.  This means that the number of news items per person, produced by a single reporter, tends to increase as a consequence of the prevailing business model on the Web: more news and more clicks amount to greater advertising returns.

In 2008 the Project for Excellence in Journalism  (PEJ) summed up the phenomenon described by Starkman: “in today’s newspapers stories tend to be gathered faster and under greater pressure by a smaller, less experienced staff of reporters.”

All this has created what Starkman calls news panic, the panic of news for news’ sake as well as a lack of discipline.  News websites, Starkman warns, offer such massive quantities of stories it’s impossible for a single reader to digest them all; in theory there should be fewer stories, not more.

Inevitably the way journalists approach the news has changed.  If in the past it was the well-investigated, in-depth stories that were praised, today what counts is the number of clicks-per-view of an online article, the traffic that a certain news item is able to generate.  As a consequence a journalist’s approach to the news adapts to the mental framework of the Web.  There is a tendency, for example, to calculate the time it takes to write a story based on the impact it can have on traffic: is it worth finding more than one source, doing in-depth research or is it better to take a shortcut that will provide the same if not better results in terms of traffic generated? Also, doesn’t it make more sense to favor blogs, where opinions are expressed with a certain style and effect, and include an element of provocation and alarmism?

More speed and more news.  More news, which even without any real journalistic value, can increase traffic.  Why not?  In his article Starkman offers data worth reflecting on: in the year 2000 the Wall Street Journal published about 26,000 articles a year; in 2008 they produced 38,000 articles, and in just the first three months of this year they produced 21,000!  And that’s without counting blogs and other Web-only material.  In the meantime at the WSJ the number of journalists decreased from 323 to 281 (2008 figures), a 13 percent contraction of the newsroom versus a 46 percent increase in production.

The Internet, Starkman notes, allows you to publish anything at any time, but it would be advisable to be more cautious and safeguard the interests of the readers instead of blindly chasing the goal of numbers. But for publishers, writing as much as possible as quickly as possible is tantamount to monetizing the product because it feeds the traffic generated.

On the other hand, an increase in speed and excessive production results in a reduction in execution time and a greater commercial competitiveness.  Hence, you find fewer original articles and news items produced by single publications, and a greater dependence on news provided by Public Relations offices.  According to Robert W. McChesney and John Nichols in their book The Death and Life of American Journalism, from 1980 to today journalism has become increasingly hostage to news generated by the PR lobby.

» Ethics and Quality » Journalists and the Hampster Wheel