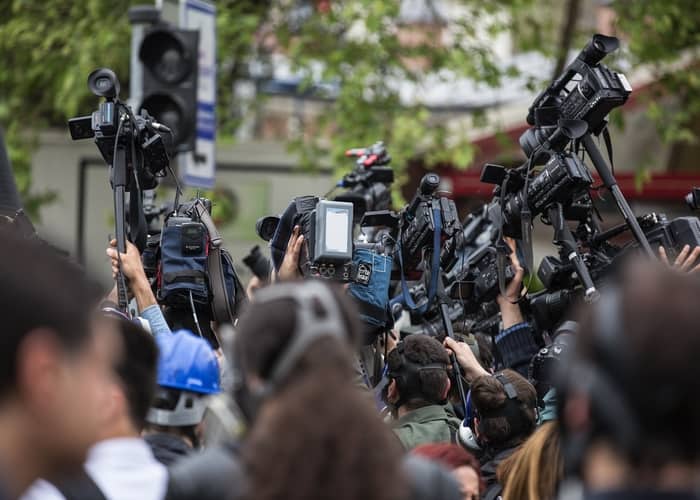 A new study from Women in Journalism reveals a shocking lack of diversity in British media.

According to the A Week in British News report, out of 174 front-page by-lines, only one in four went to women and not a single black reporter featured on any front page.

Supported by staff and alumni from City, University of London, the study also reveals that during the week, just 30 per cent of 877 expert guests featured on televised news shows, were women. Furthermore, out of a total of 723 prime-time radio reporter appearances, just four were by black women.

Between the week of Monday 13th July – Sunday 19th July, the researchers read the front page of every major British newspaper, watched all daily showings of several popular TV news channels, and listened to around 100 hours of radio news coverage.

Major stories during the week included the erection of a Black Lives Matter (BLM) statue to replace the torn down Edward Colston monument in Bristol, Huawei being blocked from the UK’s 5G network, masks becoming mandatory in shops and the announcement of the ruling to allow Shamima Begum to return to the UK.

Professor Jane Martinson, Marjorie Deane Professor of Financial Journalism at City and an adviser to the researchers, is urging media organisations to be serious about monitoring and taking practical steps to dramatically improve diversity.

She said: “This snapshot of the British media shows how far it is failing to represent all sections of society. Rather than warm words, the industry needs to act on the data and take action if it is to stay relevant.”

Where are the women and non-white guests?

The report found that when non-white expert guests were asked to appear on radio and TV news, it was often to support stories related to race.

More than half of Black and Minority Ethnic (BAME) guest appearances on TV were either during coverage of non-white communities and countries, or directly related to race, with topics including colonialism and BLM.

Female reporters appeared on TV less than half the number of times that their male counterparts were featured. And out of the 709 reporters in the shows throughout the week only 43 per cent were women.

Newsnight also failed to feature a single non-white expert guest in the period covered by the snapshot.

In radio, every single prime-time presenter on LBC was white and all 27 slots were filled by men, apart from Shelagh Fogarty on at 1-4pm and Rachel Johnson on at 6-7pm on the Friday.

Out of the 119 reporters featured on LBC’s prime-time programmes, between that time, just 23 per cent were women and every single one of them were white.

Coral James O’Connor, Lecturer and Diversity co-lead at City’s Department of Journalism said: “The research findings prove what we always knew. What we need to know now is what will be done to change this and how will industry leaders take that first step that sees the sustainable and long-standing change that is needed. The evidence is clear, the question is what happens next?

Read the full report, ‘A week in British news’, published by Women in Journalism and the University of Westminster in collaboration with City, University of London.

If you liked this story, you may also be interested in: Why we need more diverse newsrooms.

Matthew joined City, University of London in December 2017 as a Communications Officer. He graduated with a degree in English literature and history from the University of Portsmouth, where he was also an editor of the student newspaper, The Galleon. Prior to his role at City, Matthew worked in Communications at the Royal Free London NHS Foundation Trust, where he was involved in ground-breaking stories such as the British Ebola patients who were treated at the Royal Free Hospital and media features on eating disorder awareness campaigns.
» Ethics and Quality, Latest stories » Snapshot of British media reveals worrying...