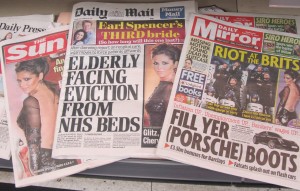 In almost every European country a tabloid paper has managed to seize the crown for the highest circulation. It’s comforting to know that in many European nations (Sweden, France, Germany, Hungary, Spain, Austria, Switzerland and Portugal to name a few) at least one broadsheet holds strong among the three most-read daily newspapers. Unfortunately this doesn’t hold true in the United Kingdom.

In the UK the three most popular daily papers are tabloids: the Sun with a circulation of 2,955,957, the Daily Mail with 2,096,074 and the Daily Mirror with 1,239,691, respectively. In comparison, the most popular UK quality newspapers, the Daily Telegraph and the Times, only boast circulations of 683,220 and 506,997. As Britain is usually considered exemplary concerning quality journalism due in part to the high reporting standards of the BBC, it’s interesting that tabloids shine this much brighter in the British media landscape.

Hence, the question arises as to why the British cultivated such love for tabloids and seem to have a certain disdain for broadsheets. Is it due to differences in content, layout, format or price or could it be a combination of factors? Professor John Tulloch, head of the Lincoln School of Journalism and Co-Director of the Centre for Media Policy, Regulation and Ethics, believes that class distinction in British society might play a role. “Broadsheets are designed for middle class people. Tabloids are aimed at working class people. Reliable popular news has been provided in a much more trustworthy way by the BBC and other broadcasters. Since the rise of the BBC, ordinary people have not needed newspapers for basic news,” he says.

Social stratification is a recognized and widely acknowledged fact in the UK, perhaps more prominent than in any other Western European country. Indeed, members of different classes, the working, middle, and upper class, take a certain pride in their social affiliation and are often distinguishable not only through their jobs but also through the media they consume. According to a BBC survey published in 2007, 57 percent of adults in the UK considered themselves part of the working class.

As broadcasting companies provide reliable high quality news, tabloids are not required to do so and instead cover sports, scandals and humor, in addition to scrappy entertainment. The Daily Mirror carries more serious political news than the Sun but both papers focus on celebrity and human interest topics. Although the Daily Mail runs a large amount of conventional news, it tends to be presented in a populist framework. This concept of selling sensational “news” was established in the 19th century with Sunday papers and was later adopted by daily newspapers due to high sales figures.

However it’s not only working class individuals who read tabloids and tabloids are not only aimed at this class. According to the National Readership Survey, over a third of the Daily Mirror and Sun readers are part of the middle class. The Daily Mail‘s target audience is lower-middle class, whereas the Sun and the Daily Mirror focus on the working class. Nonetheless, there are middle class readers who enjoy these two popular newspapers as well.

» Ethics and Quality » Tabloid vs. Broadsheet