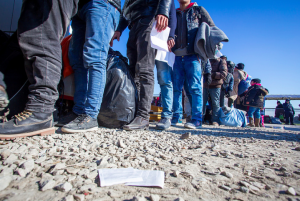 Content analysis of newspaper articles about the refugee crisis in Europe and Africa reveals that the voices of migrants are rarely heard.

Content analysis of over 1500 newspaper articles in five African and six European countries reveals coverage of migration from Africa to Europe is generally superficial and parochial. The study found important context is often omitted and migrants’ own stories rarely feature in reporting.

Increasing numbers of migrants from African countries are currently seeking to enter Europe, often risking their lives when crossing the deserts, passing through war-torn Libya, and boarding ships on the Mediterranean Sea. The United Nations High Commission for Refugees (UNHCR) estimate that in 2016, nearly 200,000 people have arrived in Italy by boat. Most of these arrivals are migrants from African countries, according to the UNHCR, and the numbers are expected to increase dramatically in coming years.

Until now, little has been known about how migration from Africa to Europe has been covered by media in originating countries and along migrant routes. This is not only true for European, but especially for African mass media: Why do Africans flee to Europe, according to mass media in Germany, France, UK, and Spain? How do journalists in Italy and Greece – where the majority of migrants from Africa set foot on Europe – cover migrants and migration? And how do mass media in Africa portray the reality of life in Europe, and political debates about migration in Brussels, Berlin, and London? 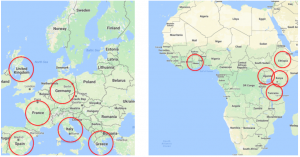 The study looked at coverage in five African and six European countries.

African and European researchers teamed up to analyse more than 1,500 articles, which appeared in 22 opinion-leading newspapers in the countries studied, during 2015/15. The research was funded by the German Foreign Office, in the context of the project Journalism in a Global Context.

There is a huge gap regarding the quantity of coverage of migration from Africa to Europe: Most (88%) of analysed articles appeared in European media, only 12% in African media.

Coverage in Europe and Africa is dominated by day-to-day politics, and lacks deeper insights: Less than 5% of total coverage is devoted to economic aspects of migration from Africa to Europe, or other relevant background information.

Coverage in Europe is very insular and euro-centric: In Europe, coverage of African migration revolved around European security issues. More than half (57%) of European articles studied did not mention any African country, or actor. Most attention is paid to Libya as a transit country, but little is being said about African migrants’ originating countries.

African media generally focus on accidents and disasters – like those on the Mediterranean Sea and pay little attention to traffickers, migration routes, or housing conditions in Europe.

Migration coverage in African countries also neglects the actual migrants: Only 12.5% of the main actors featured in African media are individual citizens. Instead, authorities and politicians dominate the news. However, researchers found that journalists based in Africa report slightly more broadly about migration, its origins, reasons, and outcomes.

The African newspapers studied pay most attention to Italy, where the majority of African migrants first arrive, and Germany.  The UK, France, Spain, and Greece rarely feature.

“Europe is confronted with an ever-increasing number of migrants from African countries. But media in Europe are obsessed with tales of the Calais ‘Jungle’ – and fails to provide the background story,” Professor Susanne Fengler, Director of the Erich Brost Institute of International Journalism, said.

Veye Tatah, Chairwoman of Africa Positive, added: “Media in Africa have severe shortcomings as well. Coverage is focused on authorities and lacks a human face. Media tend to copy from European papers, without further research.”

The project Journalism in a Global Context was launched by the Erich Brost Institute for International Journalism at TU Dortmund University and Africa Positive e.V. in order to connect journalism students in Africa and Europe, to point out the journalistic implications of migration for both continents, and to strengthen the scientific perspective on this momentous political, economical and social challenge.

You may also like: One Story, Many Countries: Why Does The Media (Still) Stereotype Africa?

Prof. Dr. Susanne Fengler is the academic director of the Erich Brost Institute for International Journalism (EBI) and professor for international journalism at the Institute of Journalism, TU Dortmund University. Her professional experiences include journalism and political communication. Other topics are comparative journalism studies, political journalism, development communication, and the economic theory of journalism. She has published numerous national and international books and articles.
» Ethics and Quality, Latest stories, Research » Impersonal, Insular, Superficial: Migration Reporting In...