Why Bots Should Be Writing About Melania’s Jacket, Not Journalists 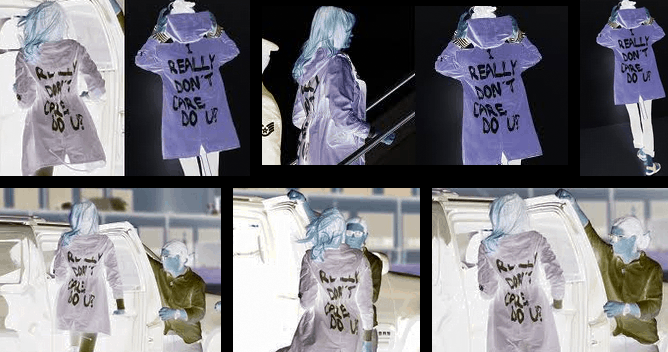 Don’t worry, this won’t be another think-piece interpreting Melania Trump’s choice of wardrobe, this will be about media. A very unhealthy part of current media dynamics, that is.

For those of you who don’t live on this news planet and missed it, I am referring to Melania Trump’s recent visit to one of the infamous migrant children’s shelters at the Texan border. During the visit, America’s First Lady wore a Zara jacket with the slogan “I really don’t care, do you?” written on its back. And, while she may not care about her backside (though I seriously doubt this), social media certainly does. This is where news dynamics come in: what’s big on social has to be in traditional media as well. Nowadays, that seems to be the law.

Everybody covered and reflected on Melania’s clothing choice, from CNN and The New York Times to Teen Vogue, as well as from the BBC to the conservative German FAZ. In fact, the “how could she!” outrage grabbed almost as much attention as President Donald Trump’s infamous policy to separate migrant children from their parents. A quick Google search with the keywords “Melania jacket” brought around 71,000 results, while a search for “Trump migrant children” surfaced around 76,000 results. It is time to ask: should these stories really be of nearly equal value to journalists?

What’s big on social has to be in traditional media as well. Nowadays, that seems to be the law.

As the recently published Digital News Report by the Reuters Institute for the Study of Journalism revealed, trust in traditional media isn’t high right now. This year’s figure in the world’s biggest survey on online news consumption was 44%, meaning that on average more than half of the 74,000 users polled don’t trust established media. But trust in social media is a lot lower. It came in at only 23%. Consequently, when traditional media pick up everything that’s big on social just to boost their social media performance, they enter a vicious circle of diminishing trust.

Even worse, they devote energy to inflating stories that don’t really make a difference to people’s lives. Energies that are badly needed elsewhere. And yes, audiences notice. They become aggravated by copy-and-paste pieces of the kind they can find everywhere. And you can bet they don’t want to hand out cash for that kind of journalism. Also, show me the reader who turns into a devoted subscriber because of one columnist’s insights about dress codes at a symbolic political event.

Show me the reader who turns into a devoted subscriber because of one columnist’s insights about dress codes at a symbolic political event.

According to the report, on average only 14% of respondents paid for news online in the past year. In times like these I’m not surprised, because this kind of “herd coverage” massively affects trust. 42% of those surveyed said they had been exposed to “poor journalism” in the week before the polling, significantly more than the 26% who claimed they saw news that was entirely made up and “fake”.

Last week IBM presented a robot that engaged in a real debate with a person, coming up with the pros and cons of a controversial issue. The Financial Times quipped that this was great news: bots could write commentary and free up journalists for reporting on the ground or telling the bots what to think. This is indeed what journalism really needs: good reporting and more debates about what to do – and what not to. Let the robots do the predictable and write about Melania’s jacket.

This article first appeared on NewsMavens. It is republished here with the permission of the author.

Alexandra Borchardt is Director of Leadership Programmes at the Reuters Institute for the Study of Journalism at the University of Oxford. There she developed and leads courses such as the “Oxford Perspectives” series aimed at senior journalists and media managers. Prior to this she was the managing editor of Süddeutsche Zeitung (SZ), Germany’s leading quality daily. Alexandra teaches “Leadership and Strategy in the 21st Century” at TU Munich, gives lectures and talks on digitisation and the media, and writes commentaries for outlets such as Project Syndicate and NewsMavens. She is the author of the book "Mensch 4.0 – Frei bleiben in einer digitalen Welt" (Freedom in a digital world). She serves as vice chair of the Council of Europe's Committee of Experts on Quality Journalism in the Digital Age.
» Comment, Recent » Why Bots Should Be Writing About...