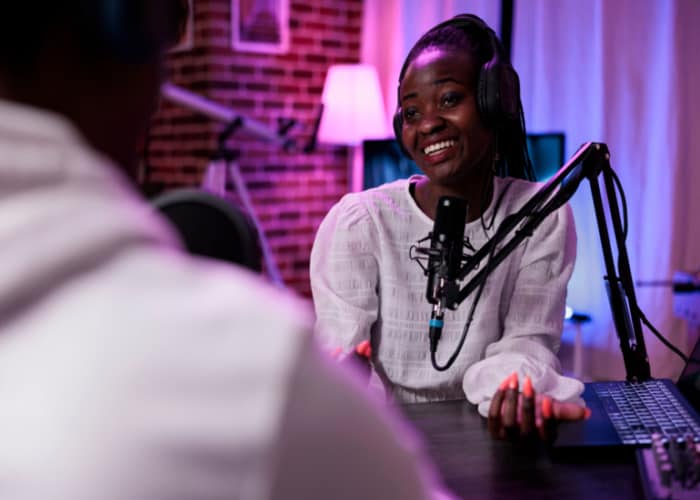 Study after study shows that even though women account for more than half of Ghana’s population, 51.2 percent, they remain underrepresented in nearly all levels of leadership in many sectors – including politics, media, and business. Nowhere is this gender gap more apparent than in the media in Ghana. A Media Foundation of West Africa survey found that only three of 25 media companies were headed and managed by women. Another study said men outnumber women by almost 2:1 in governance and top management of media outlets. However, women are not only absent from leadership in the media, but their perspectives and concerns are also excluded.

The recent Ghana Women Experts project, which gathered data from flagship radio and television programmes between February and June 2021, showed that male experts on the shows outnumber female experts by 11 to 1.

The project surveyed six broadcasts in Ghana: Peace FM’s Kookroko, Citi FM’s, Citi Breakfast Show, Starr FM’s Morning Starr, TV3’s Key Points, Joy TV’s PM Express, and Joy FM’s Super Morning Show. It found that politicians, lawyers, doctors, university teachers, and other men who called themselves experts and analysts dominated the programmes. Out of the 1,476 experts featured on the shows studied, only 128 were female experts, representing a mere 8.7 percent of the total number of experts interviewed on all the programmes. Out of four breakfast shows monitored, only one programme interviewed more women experts than men.

Producers and journalists attribute the disparity to a range of problems, including the absence of women in key leadership positions and the reluctance of women to participate in media discourse. But an analysis reveals that male experts were given more time than the women experts who appeared on these shows. Women experts were also limited to gender, human rights, insurance, banking, and finance topics. In contrast, male experts were interviewed on governance, politics, education, finance, energy, forex trading, sports, environmental issues, law, unemployment, legal, freedom of expression, and human rights abuse.

In Ghana’s context, this suggests issues deemed serious such as politics, policy, and some aspects of business, are reserved for male experts. The producers we interviewed after the study did not admit this bias on record, but the category of women and women experts who made it to the monitored programmes indicates a sexist bias. Furthermore, while male experts were interviewed based on their knowledge of subjects and positions of authority, most of the women interviewed for their expertise or knowledge were public relations officials or spokespersons of companies.

Where are the women?

While the study did not explore why women’s voices and expertise were absent, we interviewed some journalists, hosts, producers, and women experts from different fields about the media gender gap. Some claim that in addition to the majority of top positions being held by men, women are generally unwilling to participate in programmes. Others explain that the nature of some radio and television shows makes it impossible for them to secure women experts and commentators.

One producer said: “I’ve had many female guests give excuses why they cannot be on the show. They blame the timing, or the subject is just simply too controversial, or it is too political, and they don’t want to get involved.”

Indeed, our research suggests that time is a genuine concern for busy female professionals with other responsibilities in Ghanaian society, but there are other issues. The women we interviewed catalogued a range of problems, including the timing of programmes and interviews, sexist backlash, and the hostile nature of some shows, among others, as some of the reasons why women experts refuse to participate in national conversations on radio and television. One woman explained: “The thing about (the) Ghanaian form of patriarchy as it applies to women is that this is a society that believes women should be educated. It is a no-brainer. And they know, and they joke about the way the women do very well with English. They do very well with the currency. They read books, all of this, but when it comes to leadership and visibility, when it comes to showing expertise and being acknowledged for it, then they exclude women.”

The exclusion/absence of women experts in the media, which defines roles in society, frames and explains policies and issues, and amplifies voices, policies, and national conversations, reinforces gender stereotypes and inequality at all levels of Ghanaian society. And apart from women’s expertise being unacknowledged in the media, the dominance of male experts on radio and television means laws and policies are being framed through male lenses and without the perspectives of women. More than that, it deprives women of the space to make meaningful contributions to government policies, influence political conversations, and policy implementation. In essence, Ghanaian women are absent from the decision-making process, which is integral to an authentic, mature democracy.

Luckily, the gender gap is one of the few problems in Ghanaian media that does not require too much to fix. The media’s solutions to obstacles created by the Covid-19 pandemic demonstrate that it can address the time and in-studio presence constraints by recording women experts ahead of shows or having them join via Zoom or the telephone.

Given women’s multiple roles in society, a simple task such as producers and journalists giving female experts the chance to prepare for interviews and shows ahead of time would have a transformative effect on the participation of women in the media. This way, professional women do not have to choose between their other societal roles and participating in public discourse and decision-making.

If you liked this story, you may also be interested in: Policy brief from UNESCO recommends urgent interventions to protect quality journalism.

Nana Ama Agyemang Asante is a journalist with more than ten years of experience covering politics, gender, and business in Ghana. She was previously the co-host of the Citi Breakfast Show, on Citi FM. For seven years, Nana Ama provided the much-needed feminist perspective on national issues and debates. Prior to that role, she was the deputy online editor of Citi FM's news website, 'citifmonline', supervising factual, timely, and accurate stories. From June 2011 to September 2014, Nana Ama served as the Country Coordinator of Journalists for Human Rights (Jhr), a Canadian NGO that promotes human rights and governance stories across the African continent. She coordinated the NGO's and trainers' relationships with local journalists and media houses. Nana Ama was recently a fellow at the Reuters Institute of Journalism at the University of Oxford and the National Endowment for Democracy in Washington DC. Her most recent work is the Ghanaian Women Expert project, which tracked the number of women experts interviewed in Ghanaian media.
» Ethics and Quality, Recent, Research » Why we need more women experts...