The three-dimensional charm of zines remains relevant in Berlin.

Or at least this holds true for the group of hawkers and enthusiasts gathered at Zinefest Berlin, a celebration of DIY publishing. Halley Murray, artist and zine aficionado, helped found the event last year in an effort to locate and unite publishing comrades in Berlin.

“At first I couldn’t find anything,” she says, “which seemed strange because Berlin’s such an art-central place.”

Murray shopped  around for venues and within a few short weeks she assembled a crew of like-minded Berliners with whom she mothered Zinefest. The event ­– which made its second annual appearance early this November ­– spanned two days and featured nearly 50 zine-stacked tables, a lecture on Tijuana Bibles, a workshop on book binding and a selection of vegan cakes (DIY, obviously).

But What’s a Zine, Really?


A zine – by common definition – is a self-published, small circulation, non-commercial booklet or magazine. They are unfiltered, idiosyncratic accounts of time and place, functioning as cultural records, often documenting sub (and sub-sub-sub) cultures. This year’s Zinefest covered a range of topics, including titles like Dressed Like That (a zine about sexism in the queer community), Deep Green Resistance (a zine about saving the planet), mad. about you (a zine about emotional crisis and community support) and Masturbation (a zine about…being lonely). Contrasting sharply with packaged narratives appearing in mainstream media vehicles, zines often encompass a striking scale of human experience. “Zines are precious,” explains Murray. They are caches of the overtly personal, the otherwise unpublishable, the decidedly miscellaneous. They are what came before the blog. Some are raw, heart-wrenching accounts of personal strife, others offer meticulous instruction on, say, how to start a vegan-anarchist revolution or build a solar-powered toaster.

They are, in a sense, what the fringe corners of the Internet look like on paper.

Yet somehow, their continued existence feels superfluous in a world bent on experiencing most things via screen. The fact that throngs of people continue to share stacks of copied-and-pasted documents that have been physically copied and pasted seems to evidence a reluctance to obliterate paper-based exchanges of information.


While unique in vision, the wares at Zinefest are certainly not the first of their kind. Berlin’s convention of pamphlet-pushing punks, geeks and radicals is preceded by centuries of avant-garde publishing traditions. For example, not one but two major political revolutions of the 18th century were emboldened by underground intellectual publishing. In the case of the French Revolution, pamphlets disseminating information on nationalism, citizenship and social injustice were privately printed to avoid censure by the monarchy. Over in the New World, hipster Thomas Paine was among the first indie publishers, acquiring notoriety at the beginning of the American Revolution for underground smash-hit Common Sense –  a “pre-zine” which ultimately led the American Patriots to declare independence from Britain. Further independent publishing from the late 18th century onwards helped spread the dissident political ideals which inspired the Mexican and Russian revolutions in the early 20th century.

The Dadaist movement produced a wealth of self-published material in cities like Berlin, Cologne and Zürich. Dadaist journals were characterized by an ephemeral quality and surpassed the graphic and journalistic conventions of their time, incorporating experimental uses of the printing machine.

Over in the U.S., science fiction enthusiasts (affectionately referred to as “mega nerds” in contemporary discourse) used the mimeograph to produce fanzines in homage to the flourishing SF genre.

In the post-Stalinist U.S.S.R., dissidents created samizdat literature – a contraction of “self publication” in Russian – which was suppressed by the government and distributed in secrecy.

And just before the Punk movement of the 1970s, the almighty photocopier appeared, giving way to a prolific succession of incendiary punk zines created with the blood, snot and tears of a disenfranchised populace.

And somewhere back there came the Internet.

To be general, publishing has seen a lot in the last few centuries. 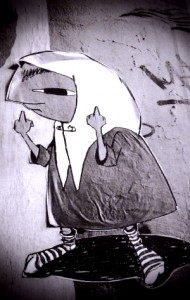 “Dressed Like That: Feminine Voices on Sexism in the Queer Community”


Mutations in the way we create and consume media have invariably led to mutations in the zine, or the idea of one. Many developed into blogs and websites (popular tech and culture site BoingBoing.net started out as a mere zine), while others climbed to chic glossy status (Anthem and Giant Robot, although both have since reverted to online-only).

Still, the basic canon remains the same: challenge the prevailing medium, form a new aesthetic and generate content relevant to the contemporary situation. Consistent with previous decades, there’s an anti-capitalist quality to zines, a willingness to swap rather than sell. “I actually don’t think I’ve ever made any money,” says Murray, who manages to cover production costs at best. Murray publishes her own zines (Infecticitis, Be Your Own Damn Tour Guide) and sells them through her distribution website, although she’ll occasionally use other outlets to circulate them.

Some are on display in the back room of a vegan sex shop, on consignment. “They aren’t necessarily about vegan sex toys,” says Murray. “But they were looking for zines made in Berlin.”

The Berlin scene is less fibrous than in cities like London or Tokyo, where the zine medium is maintained through an organized network of enthusiasts. Zinefest Berlin, however, is certainly helping to bolster its local community.  According to Murray, approximately half of the tables were run by Berliners, while others hailed from France, Italy, Lithuania, London and Spain. “People definitely came in on airplanes to be here,” she says.

Dan Rhatigan, London-based graphic designer and creator of the delectably hip  Pink Mince, is one such international participant. “As far as the crowd at Zinefest, I was struck by how overtly the mix tended toward social justice and politics,” he says. Rhatigan explains that London zine events devote more to the artsy-craftsy.

A newcomer of sorts, Berlin is sure to carve its own niche. Which is not to say it doesn’t already have its own gems, like Dr. Zineatron, a new zine library in Friedrichshain, and the Archiv der Jugendkulturen (Archive of Youth Culture), which amassed over 30,000 zines, comics, books and flyers from various swaths of youth culture. There’s also a loyal strain of book and comic shops ­(Renate, Do You Read Me?!, Motto Distribution, Prinz Eisenherz) which keep a hearty selection of zines in stock.

A Word on Paper


“For me, the latest explosion of zines is very much about a return to paper, a reaction to years of content and interaction only happening online,” says Rhatigan, who published a zine called Rumpus Room in the early ‘90s and maintained activity in the zine community for more than a decade. He describes a wave of zine-makers – wearied by the costs of mailing and photocopying – defecting to online publishing en mass. “But a decade later the Internet was clearly figured out by regular media, so it doesn’t surprise me that people react against that once again to find ways of making things they care about tangible and more permanent, more special.”

Whether they’re around to rebuff the Internet, to empower underserved populations, or to wax poetic on composting techniques, zines remain a powerful form of social currency. They reflect a larger transformation, allowing media consumers to become media creators, subverting normal conventions of exchange. Zines are, in a sense, another loving ode to the print medium. Their existence, which places little to no value on monetary gain, reinforces the notion that print still has a number of unique characteristics yet to be surpassed by anything else.

Kate Nacy is the first EJO Fellow to participate the European Journalism Fellowship program at the Freie Universität Berlin. Kate Nacy works as a journalist, writer and editor. Her work has appeared in news publications as well as in literary and arts journals. She served as the European Journalism Observatory’s English Web Editor from 2008 – 2012.
» Specialist Journalism » Zine: The Analog, Pre-Blog