Carta, a Year After
the Comeback

Anyone who knows about good stories knows that the best ones are seldom the easy ones. That said, the story of Carta has not been an easy one. Carta is a German multi-author blog dedicated to exploring the interface of media, economics and politics, focusing on the interconnectedness of the three fields as they apply to the contemporary situation in Germany. “We try to look at how the media influences the public and how the public evolves and transitions in a digital world,” says Tatjana Brode, one of Carta’s three editor/publishers. A more bohemian description might cast Carta as a collective of writers and thinkers bent on deepening critical public discourse. The result of which is a curated, evolving online dialogue.

Carta is not a blanket news site or aggregator. “We don’t have the resources to be a news site, and that’s not what we’re trying to be,” says Brode. Carta is a blog. A smart blog. Carta was founded in 2008 by Dr. Robin Meyer-Lucht. Meyer-Lucht was many things, as bright people tend to be. He was a media economist. He was a journalist. He was an innovative figure in the German media, an advocate for digital media reform and one of Germany’s most salient bloggers. In its nascence, Meyer-Lucht financed Carta out-of-pocket. He built the project on an independent Huffington Post-esque model and rallied a diverse cross-section of writers toting impressive resumés and specialized knowledge. After its launch, Carta rose quickly to prominence, offering – among other things ­– a sound example of critical media-on-media observation. In 2009 Carta received the prestigious Grimme Award for quality in online journalism, and in 2011 it received a Lead Award designating it one of the year’s best blogs.

Although Carta acquired a reputation for its quality, securing a stable business model remained a challenge, and in June of 2011, Meyer-Lucht announced the blog would take a “summer break.” In September of 2011, while Carta remained dormant in what was presumed to be the tail-end of its summer hiatus, Dr. Robin Meyer-Lucht committed suicide. The tragedy put a halt to Carta’s operations. Despite the difficulty of this particular chapter, Carta’s story continues. “After Robin’s death I thought a lot about Carta, although – of course – I had other things to worry about,” says Brode. After a reflective period, Brode (who was married to Meyer-Lucht at the time of his death) and journalist Wolfgang Michal resolved to revive Carta. Too many people had given too much to simply leave it in abeyance. 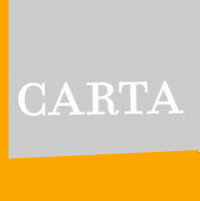 Brode and Michal (later joined by Leonard Novy) revisited the project, reconnecting with authors and laying tentative plans for the future. “The most important thing was getting the authors back,” says Brode. “We lost some, but most were committed to us, which was great.” Not everyone rejoined, but a solid team of loyalists remained. On January 26, 2012, Carta was re-launched. Producing the first announcement for the comeback was emotionally taxing for Brode. “It took me nearly two weeks to write the text,” she says. Nevertheless, her dedication to and enthusiasm for Carta is palpable. In the German media landscape, Carta is something of a rarity on account of its independence. The majority of highly-trafficked news sites in Germany are byproducts or Web versions of long-established papers or other traditional news outlets. Carta was born on its own, without the affiliation of a news company, which perhaps grants it a certain uniqueness in perspective and focus.

Today, Carta operates with a core of between 50-80 authors, although some contribute articles only a few times per year. In addition, Carta incorporates “cross-posts,” republishing topically relevant articles from other sites. Again, nearly all contributions are unpaid – which is in itself a testament to Carta’s success as a quality “brand.” Writers are dedicated to the project, and in exchange they have the benefit of working on an intellectual journalistic product with lofty editorial standards and the opportunity to reach new audiences. To date, Carta employs only one paid staff member – journalist Vera Bunse, whom Brode describes as a jack-of-trades editorial hub. “She’s working like crazy on everything,” says Brode. The issue of financing Carta remains fragile, but optimistic. As of last month, Brode learned Carta garnered support from the Rudolf Augstein Foundation, which will help finance its operations in 2013.

Other amicable relationships have fructified as well, including one with Zeit Online, which agreed to take responsibility for Carta’s marketing. The cooperation helped facilitate a new series of public events called Carta-Diskurs, focusing on different topics (the last was dedicated to urban interventionism) and held at the Zeit Online headquarters in Berlin. A year after its “Second Coming,” Carta continues to occupy a unique corner in the German media landscape, despite facing obstacles of no small magnitude. Its dedication to high-caliber, independent journalism will – we hope – keep it there.

Kate Nacy is the first EJO Fellow to participate the European Journalism Fellowship program at the Freie Universität Berlin. Kate Nacy works as a journalist, writer and editor. Her work has appeared in news publications as well as in literary and arts journals. She served as the European Journalism Observatory’s English Web Editor from 2008 – 2012.
» Digital News » Carta, a Year After
...