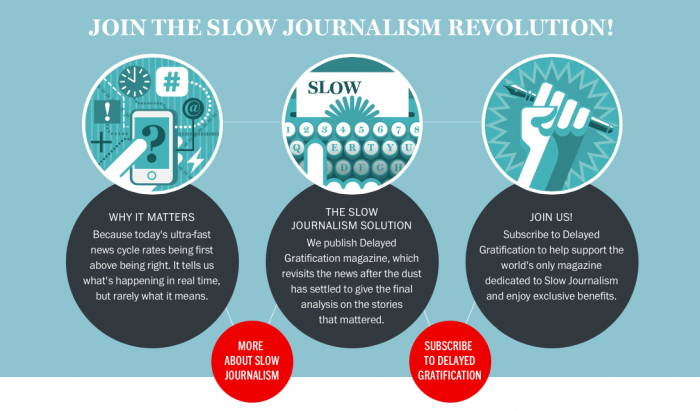 Delayed Gratification magazine: making a virtue of being last.

There is a British saying that yesterday’s newspapers are today’s fish and chips wrapping, but yesterday’s news has now become a new form of journalism: Slow News.  Its aim is to revisit  stories after the dust has settled; analyse and evaluate the facts in a non-partisan way; and tell people how the story ended and help them understand it.  And it does so in a traditional format with an up-to-date look.

Five years ago a British journalist, Rob Orchard, co-founded the print magazine Delayed Gratification. It’s the world’s first Slow Journalism magazine, printed every quarter to look back at events of the previous three months. The latest edition, for example, includes articles about the attacks in Cologne, and the Zika virus outbreak in Venezuela.  It is the opposite of most of today’s news coverage, which aims to reach the reader or viewer as quickly as possible. Breaking news from all over the world is available twenty four hours a day, as a live stream of information. Not all of it is accurate, nor is most of it put into context to help people understand its implications.

Making a virtue of slowness and accuracy

In contrast, Delayed Gratification has made slowness a virtue. The selling point of the magazine lies in being not the first, but the last, reporter on the scene, telling the story with the benefit of hindsight.  When the cameras are dismantled, the reporters pulled off and a topic has disappeared from the news agenda, the work of Rob Orchard and his team begins.

Speaking at the International Journalism Festival in Perugia, Italy, earlier this year, Orchard explained: “We wanted to slow down and find the value of a story. The rest of reporting tells us what happened, but not what that means.”  The magazine is interested not so much in the event itself but the background and consequences.  It has the advantages of time for deep research and for allowing interviewees a chance to reflect. “People do not know what they are saying in emotional situations.”

Orchard admits the magazine’s first three years were a struggle, and it was difficult to enter the market. For three years he paid himself no salary, supporting himself with another job.  He even sold some of his wedding presents to finance the magazine, which does not take advertising. Since 2014, the investment has paid off. The magazine broke even and can now invest in bigger and better stories, picking up on some that the rest of the media missed.  It already has 7,000 subscribers, thirty percent of them from outside the UK. Its artwork and infographics are modern and stylish. “Niche is possible,” he says.

It is important to convince readers that good journalism costs

Whilst idealism has paid off for his own print project, Orchard acknowledges that the days of print journalism are numbered. People expect news for free, and making them pay is difficult. “But you have to convince people that good journalism costs,” he says.  In one sense it is educating the reader, as Peter Laufer, Journalism Professor  from the University of Oregon agrees.  Speaking on the same panel at Perugia, Laufer said the media has a duty to make the whole picture clear. Moreover, coverage is unbalanced: “Five thousand journalists covered the funeral of Michael Jackson, and this could have been done by a few,” he claims, “while the others go to the rest of the world.”

Slow Journalism has already spread to Germany. The Munich-based Piqd.de is a platform launched last year and funded by the August Schwingenstein Foundation. The start-up’s founder, Frederik Fischer, told the conference that help was needed to find a way through the news jungle. “If you want to go to the cinema, you read the reviews beforehand,” he said. His platform lists articles worth reading and also explains why they are worthwhile.

Piqd.de does not evaluate articles by using the algorithms method of social networks; it has almost a hundred experts, including journalists, politicians and scientists.  Each of them writes about three reviews per week.  It draws attention to stories in the mainstream media but just over half of its ratings refer to independent media. “Here we find highly motivated, talented reporters, but all struggle to develop their brand,” Fischer says. He hopes that one day there will be a ‘seal of endorsement’ for good journalism, just as there is for organic products, Fairtrade and green energy.  This does not mean ruling out social media such as Facebook despite their contribution to ever faster (though often inaccurate) journalism. Fischer advises they “should be used superficially to draw attention to your project and bring people from Facebook to your own website.”

A slow magazine or a fast history book?

Delayed Gratification has links to Twitter, Facebook, Instagram and YouTube on its website to ask for suggestions, show off its graphics, and allow previews.  But Rob Orchard has tried to avoid social media to build readership. Instead of click baits, he opts for free events for his subscribers; a kind of socialising. “It is important to convince people of your idea, and to build them around the project,” he says.  “This is a passion project started by a small group of people… You can look on it as either a slow magazine or a fast history book.”

Susann Eberlein graduated in journalism and English Studies at the Technical University of Dortmund. Currently, she is doing a Master in European Studies at the University of Passau and works as a freelance journalist for several media.
» Business Models, Short stories, Specialist Journalism » Is Slow News Better News?