The Guardian: Giving Data To Journalists 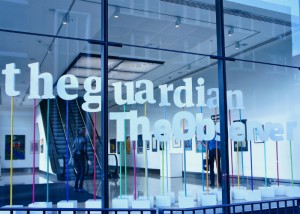 Data has become essential to newsrooms. It is used to inform how audiences access news, at what time and for how long. Journalists and editors can use data to learn everything from which stories consumers share, to their political preferences.  But with so much information available, knowing how to use it can be a challenge.

Chris Moran, audience editor at The Guardian, believes data is crucial to getting journalism widely read – but that it must be used responsibly.   “We describe ourselves as data-led, rather than data-informed,” he told an audience at Sciences Po journalism conference in Paris this week.

“I am obsessed by data in the newsroom but it should not be the only thing that informs decisions … data can lead us to understand the kind of journalism that people want on different platforms,” he said. “Those are the sort of things we are thinking about … we are not only thinking about what is popular.”

“We produce quality journalism at The Guardian and I want that journalism to be widely read and I am not apologetic about that,” he added.

Moran, who sits at the newspaper’s newsdesk, believes that ‘page views’, one of the most basic metrics available, can also be the most revealing. “We still don’t understand how journalism works on the internet and page views are critical to our understanding of it,” he said. “Page views give us a sense of reach.”

However Moran said page views and ‘unique users’ have an undeserved bad reputation in journalism. Pursuit of page views is often blamed for the deluge of celebrity and cat photos online. Metrics that measure time on a page are often considered a better indicator of engagement.

“Would you prefer longer time but fewer views?” he asked.

“We can take action over engaged time,” Moran said. “We could add subheadings, add pictures, make sure we are selling the content accurately, add video, these are all ways to string out attention time.”

Part of Moran’s job is to communicate data in a meaningful way to around 1000 journalists and staff at The Guardian. To help do this staff, led by Graham Tackley, the newspaper’s head of architecture, collaborated to develop Ophan, an in-house analytics tool.

Ophan is designed to be easy to use and to understand – even for journalists such as Moran who claims to be “terrible at maths”.  Staff can also access it via mobile devices.

The tool is tailored to give Guardian editorial staff the information they need to monitor how their articles perform and to learn about their readers’ behaviour.  Unlike many other analytics tools, Ophan does not compare how articles perform against each other.  “We wanted to democratise data,” Moran said.  “We introduced the data metrics to The Guardian deliberately to ensure that it didn’t have a negative impact, we have a keen sense of responsibility,” he added.

“If you make a tool that is going to be negative it will only have a short term effect,” he said.

“We want to show journalists where they are in the conversation and who is driving it.  What we are giving them is hugely interesting to them and we are also contextualising it on an ad hoc basis.”

To back up the information distributed via Ophan, and to translate its key findings to the newsroom in a narrative form, Moran writes a daily email circulated to all staff. It lists the main stories told by the data in the previous 24 hours.  These include things that went well – and less well. Moran said reporters inevitably blame the “stupid internet” when a story does less well, but the quality of the journalism when the story takes off online.

Data has helped to push Guardian content to a far wider audience.  It has informed the organisation of how readers arrive at the website, when and where to launch articles, which stories get the most readers and which articles make them stay the longest. This in turn helps editors to make better decisions, Moran believes.

“I often get asked what is the best time to launch a story online,” said Moran. “I aways say it is when people are awake.  It sounds obvious but it is amazing how many things are still launched at midnight.”

But is the newsroom driven by data? “It annoys me when people say we are are pandering to the audience, we are in a conversation with our readers,” Moran said.

Caroline Lees is the Head of Communications at the Reuters Institute for the Study of Journalism. She is the former editor of the European Journalism Observatory’s English language site. She is a British journalist and has worked for The Sunday Times, London, for seven years including time spent in Delhi as South Asia Correspondent and as a news reporter and arts correspondent. She has also worked as foreign editor and assistant editor of The Scotsman, and for the Economist and Telegraph Media Group.
» Digital News, Recent » The Guardian: Giving Data To Journalists