How Covid-19 is reshaping visual storytelling in Ukraine 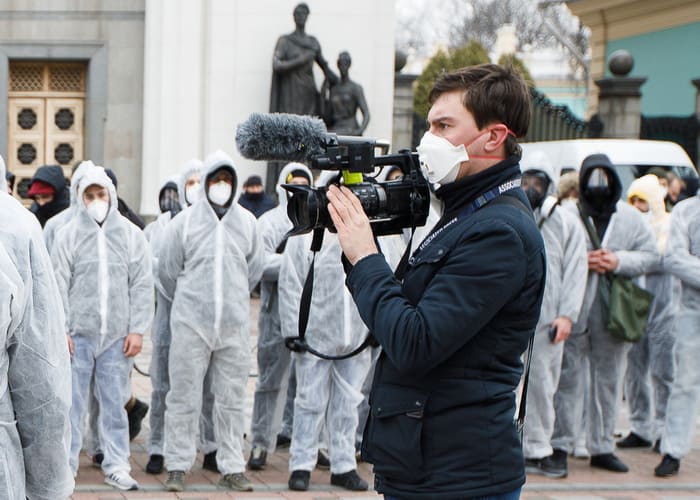 Doctors and nurses rushed off their feet, patients hooked up to ventilators, masked shoppers reaching for hand sanitisers and toilet paper, and tense government briefings are just some of the coronavirus scenes, which are now seared into our collective memory. These pictures and videos will tell future generations the story of the unprecedented global pandemic that snuck-up on the world in 2020 and changed the course of our history.

And often, the person behind the camera is a frontline reporter. Without them, the voices of vulnerable groups will not be amplified, and there will be no glaring spotlight on struggling medical systems.

But how are journalists coping with a persevering pandemic, and how are COVID-19 restrictions affecting and changing their practice? I decided to speak with reporters in Ukraine.

Ukraine confirmed its first coronavirus case on March 3, 2020. The government introduced quarantine measures on March 11. From that moment onwards, the Ukrainian media began to reconfigure and adapt its internal processes.

Volodymyr Petrov has been working as a photo correspondent at Kyiv-based weekly newspaper ‘Kyiv Post’ for six years. At the beginning of the pandemic, Volodymyr closely followed China’s developments and kept in touch with foreign colleagues. This gave staff at his newspaper an idea of what to expect and prepared them for the upcoming lockdown. 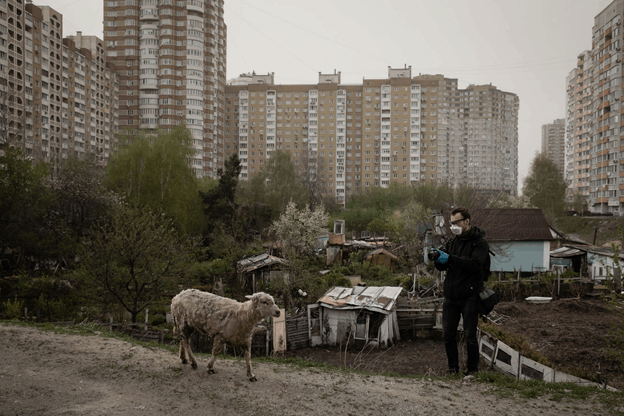 According to Volodymyr, the pandemic had the biggest impact on media and newsrooms that primarily relied on quick turnaround news content, which often lacks originality or depth. But at the same time, it gave media professionals a chance to rethink their approach to reporting. He said: “The flow of news has become quite shallow. However, there is a demand for original stories. There is room to invent something new that would be interesting for viewers and readers.”

During the pandemic, his newspaper decided to introduced drone photography. Staff was trained to operate the new equipment and to use it to enrich content on their site. 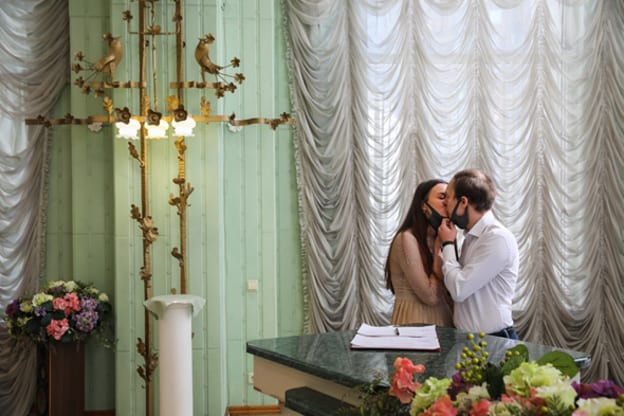 Newlyweds who decided not to postpone their wedding and got married during the pandemic. Photo provided by Volodymyr Petrov.

I also spoke to photo and text reporter Stas Kozljuk, who had been working at the magazine ‘Ukrainian Week’ for nine years. He was laid-off in the middle of the Covid-19 crisis. With little funds for investigation, business trips, etcetera, Stas had to put some of his story ideas on the backburner. 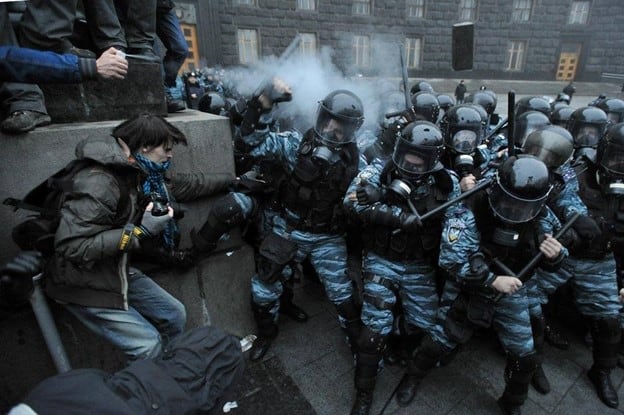 Stas Kozljuk while working during Euromaidan in 2014. Photo provided by Stas Kozljuk.

But he decided to use the extra time to pursue some long-term projects of his own. For example, he created longreads with a series of photographs and articles that illustrate how the pandemic has changed homeless people’s lives.

“For this report I also took pictures at food distribution points organised by volunteers. I was struck by the story of an elderly woman. She has a place to live, but due to the pandemic crisis, she had such limited funds that she has to walk 12 kilometres to a free canteen just to eat,” said Stas. 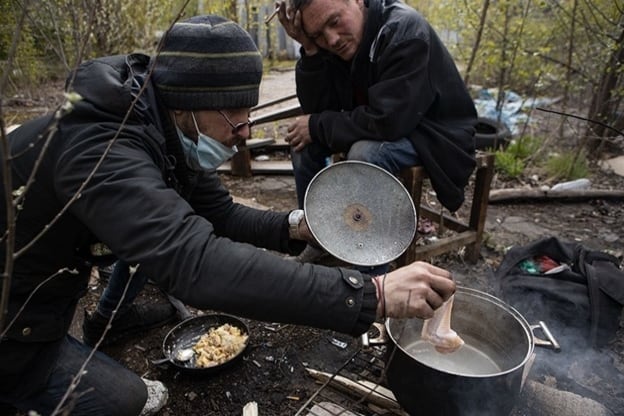 Stas Kozliuk worked for a month on a story about homeless people in Kyiv. Photo provided by Stas Kozljuk.

Mstyslav Chernov, another Ukrainian reporter, has been working with international agency Associated Press since 2014. Together with Evgeniy Maloletka and Yuras Karmanau, he produced an extraordinary multimedia report with text, video, and photos about the Covid-19 outbreak in Ukraine, that demonstrated how the medical system was unprepared for the spread of the virus.

The first difficulty his team faced was getting approval for the story. Agencies are careful about exposing their employees to the risks of the pandemic. This, combined with the fact that all media outlets have experienced funding cuts, made the selection and discussion of story ideas a rigorous process.

There were other challenges. “I spent a month in self-isolation while working on the story, and during this time, I could not take any other assignments,” recalled Mstyslav.

He added that lockdown was a curveball. His team had to overcome challenges such as arranging access to locations over the phone – a task that normally requires personalised communication and acquaintance. But despite all these difficulties, they were able to innovate and deliver a story that had a real impact. 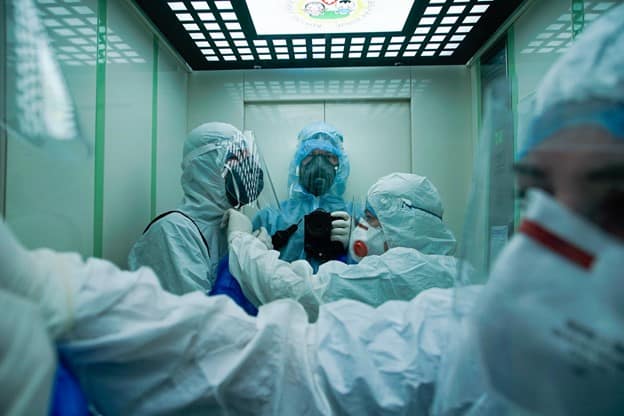 Reporting from a Ukrainian hospital during the pandemic. Photo provided by Mstyslav Chernov.

“There were several moments that impressed me the most. One of them happened in the hospital that lacked oxygen supply equipment,” Mstyslav told me. “The nurses were running around the hospital, bringing oxygen bags to patients. And one bag is enough for around 10 minutes. Then the nurse had to run again to refill the oxygen and get back to the patient. There were around a hundred patients in this hospital. And few nurses.” Later this hospital received new oxygen supply equipment as an aid.

He added: “While working we have been in the hospitals every day. It is very energy-consuming and psychologically pressuring. When we came back six months later, we found out that some of the people who helped us had died of Covid. It is not a very easy thing to know.”

These reporters’ experiences tell me that though coronavirus has had devastating impacts on the media, it has also helped the industry innovate. Reporters had time to create long-term projects and explore new approaches and technologies. Volodymyr suggests that, in the near future, there will be more in-depth and truly creative stories.

At the same time, all the reporters I spoke to are concerned about the dwindling funds in the media industry and the survival of journalists. “Fees for reportages in Ukraine are not that big. And now they are shrinking even more. I think the main concern here is how fast the media market in Ukraine will recover and get back to the pre-pandemic level,” said Stas.

Mstyslav pointed to the perils of the mass transition to online events. Reporters can’t be physically present at those events, interact with government officials – and therefore keep them accountable. “Online events are more convenient, and media outlets can save money by just taking online feeds. But it damages the reporting,” he said.

The reporters also touched on the challenges facing freelancers. Due to lockdowns, freelance journalists are losing their ability to travel for work. Also, big media companies and agencies are reluctant to take responsibility for the safety of freelance staff working on risky projects.

Mstyslav is concerned that personal projects have their limitations. “They are usually status and portfolio jobs. But they rarely generate income. The good thing is that there are many funds that are helping reporters, like Rory Peak and National Geographics. But it is definitely not enough.”

If you liked this story, you may also be interested in: Rescuing journalism from the Covid-19 assault

Tanya Gordiienko is a Ukrainian journalist and photographer. She is a PhD student at the School of Journalism, National University of Kyiv-Mohyla Academy. After working in a number of Ukrainian news media outlets, she joined the nonprofit organisations, Detector Media and Media Development Foundation. Tanya's main interests include new media, digital tools and storytelling.
» Digital News, Newsroom Management, Photography and Video, Recent » How Covid-19 is reshaping visual storytelling...