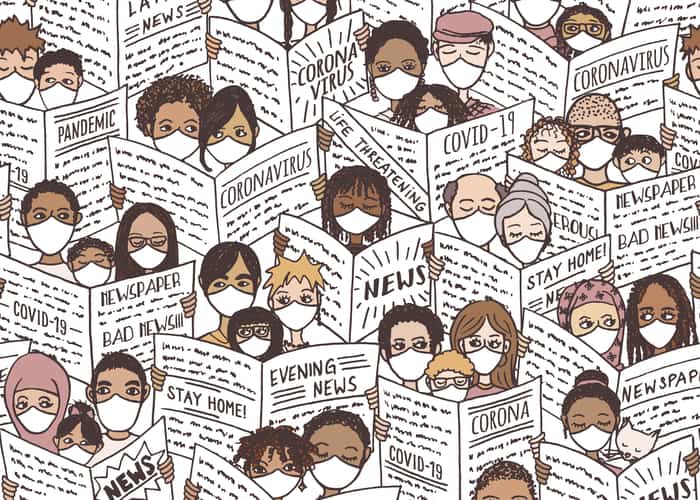 When the COVID-19 pandemic spread to Europe in early 2020, Spain was one of the first countries to bear the brunt of the outbreak. Starting in March, the country was under curfew for more than three months.

“It was a situation that had us all in its grip, that none of us had prepared for,” a magazine editor told me in an interview.

He was one of ten Spanish journalists I spoke to about their experiences during the Covid-19 pandemic for my bachelor’s thesis at the Institute of Journalism, University of Dortmund. My aim was to understand how the pandemic affected journalists’ perceptions of their professional roles.

Certainly, the crisis had introduced new and unexpected pressures to the profession. The demand for reliable information skyrocketed. Almost all interviewees reported a sharp increase in workload along with deadline stressors.

At the same time, the pandemic was making working conditions more difficult. Suddenly everyone had to resort to remote working, face-to-face interviews and newsroom interactions were forbidden, and, initially, the production of audio-visual content was almost impossible. Additionally, there was limited knowledge about the new virus and a lot of misinformation circulating on social media.

But the crisis did not just upend the daily practices of media professionals, it also affected their private lives. “After all, you’re also under curfew, you don’t go out for months, you’re scared and anxious, you worry about your family. Of course, it affects you personally,” said one of the interviewed journalists. Other interviewees also reported experiencing anxiety about their loved ones’ safety, as well as childcare issues and lockdown fatigue. In short, they suffered the same challenges as the rest of the population.

“But we didn’t just see the suffering on television, we saw it right in front of us,” said one television journalist. There were moments, she added, when her colleagues were reduced to tears, or she felt so overwhelmed she wanted to throw her microphone into a corner just before going live.

These tensions between one’s own emotions and one’s professionalism, as well as very practical problems such as difficult and unusual working conditions, have led to a new type of conflict and ambiguity in the perceptions of the role of journalism.  For example, contact bans restricted journalists’ ability to engage with, film, and interview the subjects of their stories, but at the same time, there was that expectation that they should be able to capture and authentically represent the suffering and impact of the pandemic on people.

Interestingly, the journalists I spoke to said that these challenges encouraged innovation. For example, when journalists lost access to studios, they used video conferencing tools to record interviews or asked their interviewees to film themselves on smart phones.

“We just had to adapt,” several of my respondents explained. Others were of the view that this personal involvement actually improved the quality of their coverage. “It made journalism more human and empathetic,” concluded one journalist.

On the other hand, empathy with sufferers in the pandemic also led to challenges. One reporter described how she struggled to cover deaths in care homes and small towns. “Sometimes they didn’t want to confirm that there had been an outbreak. At the same time, I also felt very sorry for them, because they were so sad. It was really ugly.” Another journalist suggested that the lack of distance from events could affect journalistic objectivity.

Within this context, I attempted to match journalistic role perceptions to different role types, based on various theoretical models. For example, Thomas Hanitzsch and other researchers who published the Worlds of Journalism study make a distinction between the ‘watchdog role’, which is focused on ensuring political accountability; the ‘accommodative role’, which facilitates the dissemination of entertainment and advice; the ‘monitorial and interventionist roles’ – aimed at influencing political agendas and driving social change; and the ‘collaborative role’- supporting those in power.

When asked about their role perception, all interviewees focused on the communication of truthful information and the associated public service duties. Thus, tendencies toward the accommodative role emerged as a dominant trend.

There was also evidence of the collaborative approach to journalism. Especially at the beginning of the pandemic, some of my respondents felt their role was to inform the public about government decisions and explain imposed measures such as the obligation to wear masks. The fact that they expressed frustration that this critical function of journalism had been neglected during the pandemic, indicates a leaning toward this type of role perception.

Furthermore, there were glimpses of the critical and monitoring functions of journalism as the fourth estate, which points to the monitorial role. This was complemented by hints of the interventionist role – particularly where the focus is on amplifying voices and telling the stories of the marginalised.

However, though multiple role types can be identified, it is clear that role perceptions during the coronavirus outbreak were multi-layered and dependent on the context. What my study suggests then, is that these varying perspectives of journalistic roles tend to become confused or blurred during a pandemic.

This is in line with the findings of research by Claudia Mellado and other researchers in 2020. They concluded that, in a global health crisis like the Covid-19 pandemic, journalistic roles can become less distinctive.

Journalism “more important than ever”

Overall, it was clear that, despite the different types of role perceptions, the interviewed journalists were unanimous in their view that the journalism profession acquired a new level of legitimacy and relevance during the pandemic. This is particularly true for local and regional journalism.

“If it hasn’t always been, journalism is now essential and more important than ever,” said one interviewee. Another went even further: “We felt as journalists that we could be part of the solution to this problem which is the pandemic.”

Pia Stenner is currently doing her bachelor’s degree in journalism and political science at the Institute of Journalism, University of Dortmund. In 2020 she studied for one semester at the University of Seville in Spain.
» Recent, Research » Covid made journalism in Spain more...