A Major Step Towards An Authoritarian Media Regime In Hungary 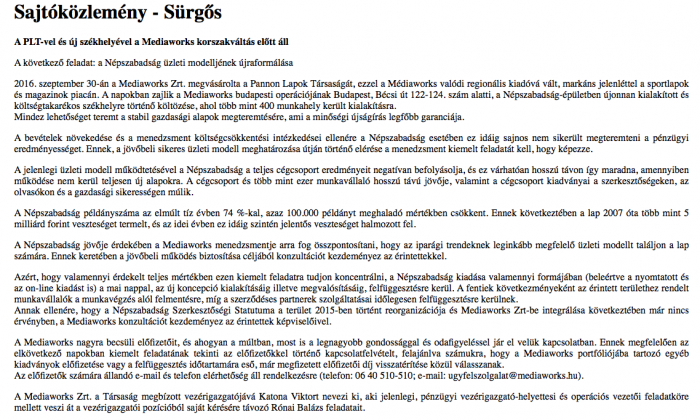 The home page of Hungary’s main opposition newspaper, Népszabadság, has been replaced by a press release announcing its closure.

The publisher Mediaworks has suspended the publication of Népszabadság, Hungary’s leading opposition newspaper and highest circulation broadsheet. Though the measure was officially referred to as a suspension, in reality it probably implies that Népszabadság has been shut down for good.

In an especially perfidious move, the newspaper was shuttered at a time when the newsroom was moving from one office building to the next, and the staff had all their things packed up. Those working in the newsroom no longer have access to their old offices, and in addition to humiliating the staff, the goal appears to be to make sure that they do not have access to the materials that they could have used to write their pieces in the coming weeks.

It has been rumoured for a long time now that a key friend of the prime minister, the public contract oligarch Lőrinc Mészáros, will become the owner of one of the largest media corporations in Hungary by buying the Mediaworks publishing house. There was some speculation as to how exactly this business would transpire, but no one envisioned a scenario where the country’s largest broadsheet would be shut down at a moment’s notice.

It is highly likely that the newspaper’s shutdown and the planned change of owners are connected, even if the latter has not yet been formally announced.


The significance of Mediaworks in the Hungarian media market is indisputable. Its revenue was roughly 55 million euros last year. Just a few days ago it bought the Pannon Lapok publishing house, which is also a major player in the newspaper market with a revenue of approximately 26 million euros in 2015. As a result, Mediaworks’ complete portfolio now comprises 12 regional newspapers, in addition to the national newspapers Népszabadság, Világgazdaság (a business daily) and Nemzeti Sport (a sports daily), as well as countless magazines and online portals.

Even prior to this day, the connection between Mediaworks and Fidesz, the ruling Conservative party led by Viktor Orbán, was often apparent, but until now the company’s operations did not ultimately impact the working of the Hungarian media landscape.

The influence of Mediaworks’ broad portfolio on public opinion is essentially based on two pillars. Népszabadság’s circulation and readership is rather small today; this is what the publisher’s press release on the issue cited in trying to justify its decision to close the newspaper.

It is true that the past two decades have not been a success story for the newspaper, and a recent audit found that Népszabadság, which distributed 208,000 copies at the turn of the millennium, has dropped to only 38,000 copies in the second quarter of this year. But the press release announcing its closure is cynical, reminiscent of a previous scandal, when the owner fired the editor-in-chief of a leading online newsportal, origo.hu, after the site had made damaging revelations about a top government minister, and claimed that the decision was due to changing media consumption patterns (since then, origo.hu has been politically streamlined and has become reliably pro-government in its reporting).

The continued operation of Népszabadság is of symbolic importance for the public sphere due to its history and professional prestige; for many, it remains the emblematic leftwing newspaper to this day. What renders the situation especially dramatic is that readers have noticed how the paper has recently improved. Several excellent journalists have recently started to work at Népszabadság, and they successfully investigated cases that ended up shaping the public agenda in Hungary.

In terms of reaching readers directly, the regional newspapers in Mediaworks’ portfolio are far more important, and for the time being we have no idea what will happen to them. According to the most recently published figures the regional newspapers that make up the new, joint portfolio have a circulation of 258.000, while the actual number of their readers exceeds one million.

Research by Mérték has shown that regional newspapers continue to play a key role in news consumption. These newspapers will definitely not be shut down since reaching their one million readers is of cardinal importance for Fidesz. But in light of Népszabadság’s closing, we should not be under any illusions about who will work for them; only journalists who are unreservedly loyal to the government will be allowed to stay on. The impact of this change will be vast because – not counting a few local commercial radio stations – regional newspapers are the last vestiges of the local public sphere that are not directly controlled by a mayor or the government’s media point man, Árpád Habony.

Is Népszabadság’s closure part of a long-term plan to control critical media?

The decision to shutter Népszabadság will go down as a historical step in the annals of the Hungarian press. It is also instructive, however, to take a look at the events that lead up to this development.

A few years ago, in 2010, two publishing houses with significant stakes in the Hungarian market, the German Axel Springer and the Swiss Ringier, applied for a merger clearance. Based on the recently adopted media law, the National Media and Infocommunications Authority denied their application. As a result, Népszabadság could not be sold to a well-capitalised investor with a strong background in the media market, but was sold to an Austrian businessman, Heinrich Pecina.

Pecina is hardly known in Hungary, but journalists have managed to unearth ties between him and the Hungarian government. It was obvious that this had in fact been one of the important goals of the legislator from the very start: the law mandated that the Authority would have to approve merger applications that were pending at the time when the new legislation was adopted. Since this was the only merger application pending at the time, the media authority’s refusal to authorise the deal was widely anticipated.

The shutting down of Népszabadság is a stunning turn of events, but it nevertheless fits into the pattern that Fidesz has worked to establish since 2014, when the prime minister fell out with his erstwhile ally, the oligarch and media tycoon Lajos Simicska, with the result that Fidesz lost part of its media empire. Now control over the pro-government media is dispersed among several players, rather than being concentrated in the Simicska business empire. The new people in charge are personally dependent on Viktor Orbán and lack even the limited measure of economic autonomy that Simicska’s businesses enjoyed.

The governing party will consider this process to have been successful if the opposition voices are silenced. Népszabadság, with its increasingly daring investigative reporting that recently brought a host of major scandals to light, proved an ill-fit for this vision of the media market.

It is an intriguing question why the government side abandoned its strategy of subtle machinations that dismantle media freedom step by step, and instead decided to destroy Népszabadság in one fell swoop, thereby potentially risking an international backlash.

It is possible that the spectacular failures of building the new Fidesz media universe have led the decision-makers to the conclusion that it would make no sense to try to integrate Népszabadság into the rightwing media empire. Any efforts at bringing in journalists who are loyal to the government to Népszabadság could have caused operational problems at other pro-government media. And it is fairly obvious that no one on the current staff would have worked for Fidesz.

Following the economic crisis and the concomitant drastic decline in the advertising market, media market players in Hungary were in a difficult position, and Fidesz shrewdly assessed that this provided a historical opening for taking control of vast segments of the market. We should be under no illusions what is going on here: Formally speaking, Mediaworks’ current, Viennese owner may be responsible, but the pervasive speculations about the influence of Orbán’s most-favoured oligarch, Lőrinc Mészáros, were by no means coincidental. Such a drastic assault on press freedom in Hungary would have been hardly conceivable without Fidesz’s assent; indeed, it was almost certainly performed at Fidesz’s behest.

The Hungarian public sphere is increasingly in government control

As foreign investors are leaving, ever larger segments of the Hungarian media market are being taken over by figures with varying degrees of public connection to the governing party. In the area of political news, only a few minor players persist, with RTL being the sole remaining major investor. When compared to autocratic regimes in previous historical periods, one redeeming factor in this situation is the existence of digital media. Even with the few sparks of hope that remain, the Hungarian public sphere is increasingly under the sway of total pro-government control as we saw during the campaign on the quota referendum. October 8, 2016 was another major step towards total government domination in the Hungarian media market.

Gábor Polyák is Project Director of EJO Hungary and an Associate Professor at the Department of Communication and Media Studies, University of Pécs, where his specialist field is media law, IT law and media policy. He is also head of research at Mérték Media Monitor, a Hungarian NGO dealing with media policy issues.
» Ethics and Quality, Media and Politics, Recent » A Major Step Towards An Authoritarian...