Is the success of brainwashing measurable? 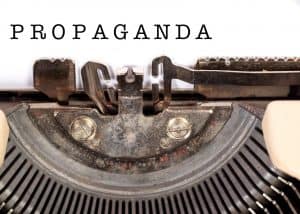 In the last few decades, political propagandists have added an impressive number of new weapons to their armoury. Social networks have been flooded with disinformation used as a tool of political manipulation. Bodies set up to monitor the trustworthiness of information set before the public have been circumvented.

In some parts of Europe, governments have gained enough power to overturn fundamental rights. The coordinated overhauling of media regulation and the media market has made it possible for large sections of the media to be put at the service of political propaganda. Though freedom of speech and a free press may in theory still exist in certain countries, this does not necessarily mean that the electorate is well informed.

Three independent Hungarian research organisations recently joined forces to devise a way of measuring the extent to which the information made available to the public is distorted for political purposes, and the extent to which this misuse of information achieves its purpose. The Political Propaganda Indicator (PPI) was modelled on the “Democracy Index” created by Freedom House and the Corruption Perception Index (CPI) devised by Transparency International. The PPI measures the percentage of a population that forms an opinion based on notions that have been proven to be false or can easily be refuted, and thereby clearly demonstrates the success of mass brainwashing techniques.

More people than ever now regularly consume news online, but what has increased is not the amount of available information but rather of informational chaos. The dissemination of fake news via online platforms is the new weapon in the arsenal of political propaganda. It is an easy matter to spread disinformation by means of robots and fear-driven shares, and in the new media age lies travel far more quickly than the truth.

A tool for combating brainwashing

Though it is now easy to bypass the checks and balances set up to prevent false information from taking root and to facilitate the dissemination of trustworthy information, in the long term we can but hope that society’s self-defence mechanisms will kick in, and that people will base their opinions on verified facts and not make decisions based on lies, conspiracy theories and false ideologies. The Political Propaganda Indicator could play a vital role here, by informing the public as to whether the level of risk arising from the extent to which the population is properly informed is increasing or decreasing over time.

The PPI can indicate the effectiveness or otherwise of a national brainwashing scheme and can give an idea of the extent to which corrective mechanisms have succeeded in countering it. In 2019, the newly elected members of the European Commission declared that there was a still a long way to go in the battle against fake news. “Large-scale automated propaganda and disinformation persist and there is more work to be done […] We cannot accept this as a new normal”, Commissioner for Justice, Consumers and Gender Equality Věra Jourová, Commissioner for the Security Union Julian King, and Commissioner for the Digital Economy and Society Mariya Gabriel said in a joint statement issued on 29 October 2019.

Contrary to the facts

Devising the PPI measuring method, formulating a set of statements for use in the pilot project and evaluating the results was very much a team effort. The project was instigated by the Dimenzió Média Foundation (Ferenc Vicsek). The market and social survey research company Závecz Research (Tibor Závecz, Klara Megyeri) took the lead on the methodology front. Finally, Merték Média Monitor (Gábor Polyák) played an important role in evaluating the results.

During the summer of 2019, Závecz Research carried out a representative telephone-based survey using a sample of 500 respondents. The aim was to find out from our sample the extent to which Hungarians had come to accept certain news items that clearly constituted political propaganda as true, even when reliable sources had already shown them to be untrue – in other words, despite the fact that these news items were demonstrably contrary to the facts and were being used for propaganda purposes as part of a propaganda campaign. We looked at how likely our respondents were to have encountered specific claims made by individual propaganda campaigns, and how likely they were to believe these claims. We did not examine the veracity of the claims.

We also tried to assess the level of media literacy of the Hungarian electorate, by investigating the extent to which voters who get their news from the rather peculiar Hungarian media system are aware of how important it is only to trust news stories that have been reported by several major and credible news sources.

We strove to ensure that claims from across the political spectrum were included among the issues highlighted in our survey. We were aware of the limitations of the pilot project, which were mainly due to the fact that the limited funds available to us allowed us to investigate the public perception of only 15 claims. However, we believe that with suitable adjustments for local conditions, this method could be used to measure the influence of populist political propaganda and the distortion of the true facts in practically any country that claims to be democratic.

A detailed description of the background to the Political Propaganda Indicator and an account of how the pilot project was conducted can be found here.

The following diagrams illustrate some of the findings of the PPI pilot project designed to establish the effectiveness of Hungarian government propaganda. They show that with some topics, more than four out of ten people believe the messages being put out by government propaganda, even when these statements are demonstrably untrue. 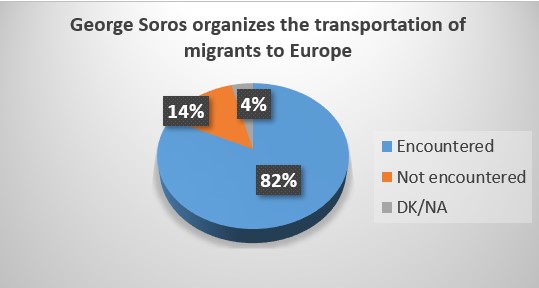 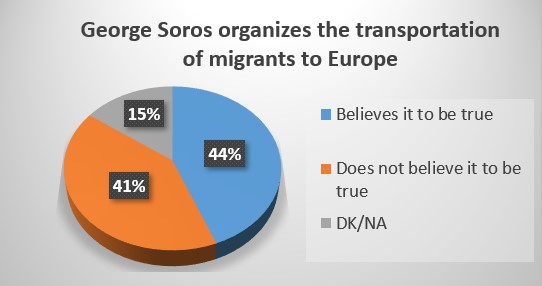 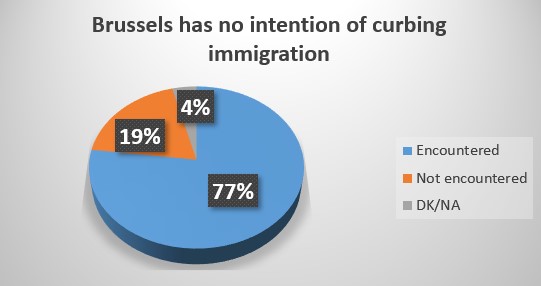 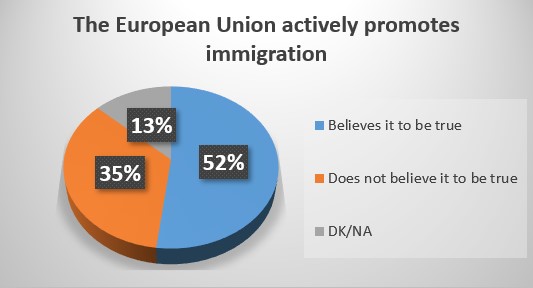 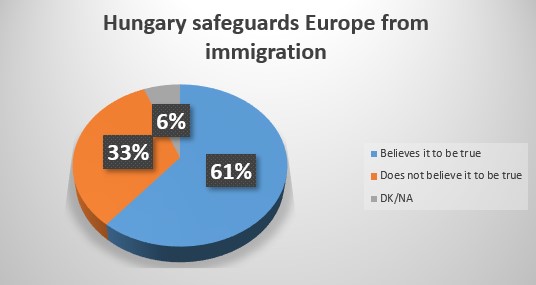 If you liked this story, you may also be interested in “Simple Yet Sophisticated: How Hungary’s Pro-Government Media Use Images“.

Ferenc Vicsek has spent more than four decades working as a journalist. During the 1980s and 1990s, he worked mainly for the Hungarian public broadcaster, in both radio and television. Since 2000, he has worked in the independent broadcasting sector and has played an active role in the community radio project Civil Rádió. He is currently the president of the Dimenzió Média Foundation, which seeks to counter the impact of disinformation in Hungary. He is also the head of the economic policy and media science section of the Hungarian Journalists’ Association (MÚOSZ).
» Ethics and Quality, Media and Politics, Recent » Is the success of brainwashing measurable?