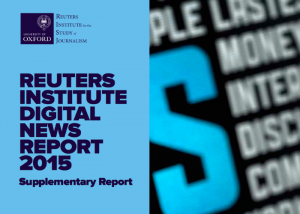 A new survey by the Reuters Institute for the Study of Journalism (RISJ), at the University of Oxford, reveals that European audiences are changing how they access news.

The survey – a supplement to the annual Digital News Report – includes data from Austria, the Czech Republic, the Netherlands, Poland, Portugal, and urban Turkey for the first time.  More than 8000 people were interviewed across these six countries, early in 2015. This data was added to existing research from 12 countries, making the latest report the world’s largest and most authoritative study of digital news.

Accessing online news is common across the countries surveyed in this report, but traditional news sources remain popular, especially TV. In Poland, 81% get news from television, 22% from newspapers and 84% online.

The survey shows that newspapers are generally being used less frequently, although print remains very popular in Austria, where 67 per cent used print newspapers in a typical week, compared to an 18-country average of just 37%.

Adoption of mobile devices for news is happening at different speeds

The consumption of news content on mobile devices varies across the six new countries studied. Smartphone news use is particularly common in Poland (52%), and tablet access is popular in the Netherlands (25 per cent) the report finds; with high figures for both in urban Turkey (57% and 24% respectively).

The use of smartphones and tablets, is comparatively lower in Portugal (34% and 21%) and the Czech Republic (34% and 16%) where a high proportion of digital news users access news content using a laptop or desktop computer. In the Czech Republic (83%), Poland (81%) and Portugal (78%) desktop/laptop use for news is well above the average (68%) seen across the 18 countries surveyed in the 2015 Digital News Report project.

Dr Richard Fletcher, the report’s lead author said: “These findings suggest that, even amongst online users, the shift to mobile news access is happening at different speeds across Europe.”

The study reveals some positive signs for domestic digital-born news brands; online news sources without origins in print or broadcasting. In these six countries, many home-grown services are more popular than major international brands such as BuzzFeed, Vice and the Huffington Post.

The survey also reveals that across the 18 nations studied by the project, the combined reach of digital-born brands is highest in Poland (75%) and lowest in Austria (21%). Digital-born brands are also popular in Portugal (62%) and urban Turkey (67%).

Social Media, led by Facebook, is a popular source for news

The report sheds light on the much-debated role of social networks as a source for news. In urban Turkey, Portugal and Poland, the proportion using social media as a source of news is well above the 18 country average.

Social media as a source of news is lower in markets where consumption of traditional news brands tends to be higher, such as the Netherlands, Czech Republic and Austria.

Facebook is the most popular social network for news, the researchers note, followed by YouTube, Google+ and Twitter. Twitter use for news is very high in urban Turkey (33 per cent) but lower in countries such as Portugal (7%) and Poland (9%), nations where overall social media use is still very high.

Few pay for online news, but new Polish and Dutch models may offer a way forward

Monetising digital news is a global challenge for publishers, with many consumers unwilling to pay for online news content.
“The proportion of respondents who paid for online news content during the last year is, in some cases, very low,” says Nic Newman, an advisor to the study and the lead author and co-editor of the main Digital News Report.

Reasons for this vary from country-to-country, but the report highlights how experiments in Poland with online paywalls and subscriptions and the micropayment model of Blendle in the Netherlands offer potential insights into how models for paid news content may evolve.

All figures, unless otherwise stated, are from YouGov Plc. Survey conducted in Poland, Czech Republic, Austria, Netherlands, Turkey and Portugal.

Total sample size was 8,181 adults in these six countries. Fieldwork was undertaken at the end of January/start of February 2015.

Comparator countries included alongside these six nations are Germany, the UK and Spain.

Where data refers to the 18 country average, these findings relate to the six countries studied in depth in this report as well as the US, UK, Germany, France, Spain, Italy, Denmark, Finland, Ireland, Brazil, Japan, and Australia. In total, the sample across these 18 nations was 31,738 online news users.

Caroline Lees is the Head of Communications at the Reuters Institute for the Study of Journalism. She is the former editor of the European Journalism Observatory’s English language site. She is a British journalist and has worked for The Sunday Times, London, for seven years including time spent in Delhi as South Asia Correspondent and as a news reporter and arts correspondent. She has also worked as foreign editor and assistant editor of The Scotsman, and for the Economist and Telegraph Media Group.
» Digital News, Latest stories » Digital News Report: Most Europeans Access...