Study: Journalists Are Extrovert And Efficient… But Disagreeable 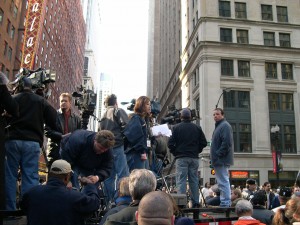 Are journalists happy in their work?  A study in Switzerland found that journalists who create the ‘product’ are less happy than the marketing people and publishers who sell it.  Media professionals who work at a distance from the actual production process (the ‘sellers’) are also more satisfied with their jobs than the working population as a whole, whilst journalists are less satisfied – and not as nice!

Bjørn von Rimscha of the Johannes Gutenberg University, Mainz, interviewed 259 media workers for his paper, The Impact of Working Conditions and Personality Traits on the Job Satisfaction of Media Professionals.  He says that, in the media context, the question of whether job satisfaction has an impact on the quality of output has never really been tested, and he uses the idea of a “happy-productive worker” as a starting point for assessing how well a media system is performing.

Media professionals, von Rimscha claims, are significantly different from the working population in terms of their personalities. Neuroticism (defined as a negative trait of insecurity and sensitivity) and extroversion (a positive quality) show the strongest influence.

Photojournalists, entertainment editors, producers,  presenters, foreign correspondents, publishers and marketing directors were interviewed for the study.  Analysis of the results showed that they were less neurotic than the general working population, but were more extrovert (with the exception of photojournalists), more open to experience, and more conscientious and efficient. However, they were also less “agreeable”.

Since personality traits don’t alter much over the length of a professional career, it’s assumed that changes in job requirements strongly influence job satisfaction.  Reasons for job satisfaction differ according to the media role, and whereas an individual’s personality and skill set might have matched the job originally, they could now find themselves in roles where their personalities are at odds with new demands.  Some may, as a result, have left the industry, and are therefore not represented in the sample.

The research by von Rimscha identifies autonomy (the freedom to decide and plan) as the most important factor for job satisfaction for media ‘producers’ such as journalists,  but for media ‘sellers’ like publishers and marketing directors,  the key is whether their job suits their personality and how well they are paid.

Photojournalists are the least happy, especially if technological developments affect their working conditions. That occupation, a creative one closest to art production, has been most affected by digitisation but photojournalists are also amongst the lowest paid and most insecure in the industry.

Technological, economic and regulatory changes in recent years have altered the structure of the industry and also the nature of jobs. Cost cutting in newspapers has forced many staffers to become freelance and entrepreneurial.  In the audio visual sector, producers increasingly require marketing skills because programmes are not always fully financed.

Commercial pressures are more likely to dominate content decisions, alienating some journalists despite their high levels of motivation.  The economic “creative destruction”  deriving from digitisation and “commodification” may also damage job satisfaction, along with precarious working conditions and less creative freedom.

The results of this study are limited to the relatively small Swiss media and the author thinks it would be worthwhile to test his findings by replicating the study elsewhere. A preliminary conclusion suggests that those organisations with a broader understanding of performance should trust their employees and give them the autonomy they need to be satisfied and productive.

Future research should focus on the question of performance: how can different aspects of performance that relate to different functions of the media be measured adequately?

This story was originally published on EJO Ukraine

Halyna Budivska is a PhD student at the Mohyla School of Journalism, National University of Kyiv-Mohyla Academy. She is also the editor of the Ukrainian website of the EJO.
» Newsroom Management, Research » Study: Journalists Are Extrovert And Efficient…...