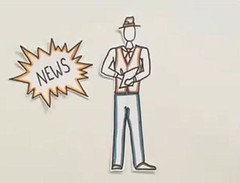 Citizen journalism is flourishing in Italy due to increasing skepticism from many Italians concerning the reliability of the mainstream press.

The last government crisis, which ended in Silvio Berlusconi’s resignation, clearly demonstrated the role blogs and social media are playing in the “Bel Paese.”  On the evening of November 12, the day Berlusconi stepped down, citizen journalists equipped with iPads, smartphones and other electronic devices took to the streets to publish news reports live.

Amateur reporting has grown increasing popular due to the absence of oversight from legacy media outlets, with readers assuming that there must be less manipulation if ordinary citizens like themselves are “documenting” what is happening.

In 2002, Liquida.it became the first Italian site to rate content on the Italian blogosphere.  The site, created to give visibility to the best Italian bloggers, provides an innovative, democratic, and transparent tool to promote the legitimacy of bloggers.  The name, meant to evoke the essence of digital content – fluidity and mobility – is a homage to Liquida’s mission of promoting a transparent environment and growth without boundaries.

Since its foundation the site has recorded the creation of more than 2 million blogs, 400,000 of which are currently active.  Among the 1,500 blogs created each day, 30 million pieces of individual content is published annually, including text, photo, and video. Liquida.it reflects the contemporary public sphere and captures the current blog boom in Italy by embodying the true democratic nature of their site. According to their publications and surveys, of all the conte published annually, three percent is considered useful and high quality. Not bad for citizens still unfamiliar with the instrument.

In 2006, the evolution continued when Radio Radicale became one of the first mainstream media outlets to explore citizen journalism through their site Fai notizia. In that same year, La mia notizia and Il giornalismo fatto dal cittadino informato were launched, giving users the ability to post articles quickly and without registering.

The year 2008 marked the official beginning of citizen journalism in Italy. The University of Macerata got the ball rolling by launching their first Master’s program in citizen journalism. Program professor, Gennaro Carotenuto, who wrote a book on the subject – Giornalismo partecipativo – outlined what he felt should become common in all journalistic blogging:

Later in September 2008, Carlo Revelli founded AgoraVox, an Italian blog run by Francesco Piccinini. When asked why he chose Italy for French expansion, Revelli answered, “because in Italy, there is a need for bottom-up media. Platforms must exist that allow citizens to express their point of view. This is the strength of bottom-up media”.

In an interview with Salvatore Ditaranto at the University of Rome, Revelli again explained that, “newspapers are changing, and [it] will not end. AgoraVox is an example of citizen journalism and it is not in conflict with professional journalism. A citizen who takes up with his camera what happens under his building is not in ‘competition’ with the journalist seeking news every day, just as a citizen who avoids a theft does not compete with the police. We want to let them work together, professional journalists and citizen journalists in order to achieve real participatory inquiries”.

A truly innovative and impressive new website created by 26-year-old journalist David Cohn of San Francisco called SpotUs, has created the newest platform for citizen journalism. The website, a crowd funding portal which appears in Italy as SpotUs Italy, allows reporters to promote their story ideas with the eventual hope that they will published and commented on by citizens. Anyone who considers a story to be interesting or valid can finance the journalist to produce it. While this idea is unique and promising, it has been temporarily suspended for lack of funding.

In any case, citizen journalism has become a reality in the world of communication, and even the most skeptical critics should and can confirm it. With traditional forms of journalism, a participatory effort should be made to keep citizens constantly informed – with the hope that the reader of today can become tomorrow’s writer.