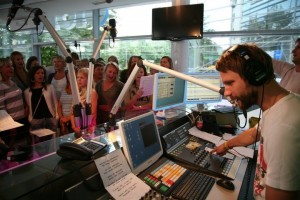 Latvian media is more transparent than ever, but some outlets find that translucence doesn’t always translate to vitality.

In an attempt to attract new readers and retain existing audiences, various types of media outlets encourage audience participation. In addition to increasing levels of approachability, editorial boards hope to show users their opinions are important while also stressing that the media is no longer something distant and abstract.

But why is the media becoming more accessible, and how will audiences be addressed using new forms of communication? More importantly, how do media representatives feel about the transition and what are the benefits for consumers?

Media expert Anda Rozukalne, chair of the Riga Stradins University Communication Studies Department, advocates breaking down editorial walls to encourage society to take a more active role in their media.  Rozukalne explains that newspapers must increase transparency and create more opportunities for readers to take a hands-on role in the publishing process. Rozukalne is convinced that receptiveness can be seen as a positive trend, allowing consumers to feel like equal collaborators, but she also understands that marketing plays a role.

“The warmth of [this] relationship is easier to sell. Transparency is the new definition of objectivity: when we know how it works and what methods form the basis of the specific activity, it will be possible to evaluate how fair and responsible the process is,” Rozukalne emphasizes.

Building close cooperation with readers has been the pathway to success for the Latvian weekly women’s magazine Ieva. Summer camps organized by the magazine have helped to promote interactions between the audience and the magazine’s developers – allowing staff to better understand their readers.

Rozulakne also points out that newspapers that collaborate with their consumers are able to obtain vital information. “According to international studies, editorial boards have very little knowledge of their audience in general; they live with presumptions of what society expects from them, in addition to meeting the requirements set by their advertisers, but it has nothing to do with the reality.”

By fostering close relationships with readers, publishers are able to increase their media responsibility and place emphasis on the quality of information and content produced.

In Latvia, Radio 101 is considered the leader in terms of approachability.  Not only are their broadcasts delivered from inside a walled glass studio located in the middle of a public square, they also stream content for free via their webpage. “From the very beginning, when the idea of the radio was born, it was pretty clear that it should be located in the middle of the city,” says Zane Peneze, developer of morning programming for Radio 101.

Peneze and colleague Edwards Svans both see transparency as a vehicle for success in radio, a vehicle that has the potential to be implemented across the globe. Nevertheless, they do not see themselves as pioneers, pointing out that there have been other attempts to create open studios in Latvia.  Radio station Rietumu radio was the first followed by Hakizaka, which transmits four live broadcasts a day from a studio in the club Kalku varti featuring contests and viewer participation.

Daily newspaper Diena (The Day) is one of a few Latvian newspapers to create new channels of communication with readers, thanks to a solid Internet platform providing readers with breaking news, video content, and live broadcasts (currently – the daily video program Dienas rits), creating serious competition for television.  Guntis Bojars, editor-in-chief of publishing house Dienas Mediji, explains, “The media looks for different ways [to increase intimacy with] their readers throughout the world. They should be unique and different. It is the most sensitive and a permanent issue, which is important for all editorial boards.”

Bojars has been called a pioneer in Latvian publishing, namely due to his new weekly magazine PiektDiena (The FriDay).  The e-magazine, available for both iPad and Android OS users, is one of a kind in Latvia and rivals many competitors worldwide. Articles are supplemented by photographs, videos and active links to external resources or social networking profiles. By offering traditional content paired with audio, video, commentary, photos and more, Bojars is offers the ultimate interactive news experience.

The Fear of Losing the Audience

While many assert this is the beginning of the transparency movement, others see current trends as the swan song of open editorial offices. Media and public relations expert Sandra Veinberga is among the researchers who disagrees with her colleagues, claiming that the period of open editorial offices has ended in most Western countries. “Their zenith was in the ‘90s, when public podiums were made, which allowed people to express themselves for free with the hope of gaining popularity and increasing their audience. Unfortunately the majority of media outlets stopped this practice.”

Veinberga is convinced that such media activities do not develop real feedback. “Being afraid of losing their audience, media outlets begin giving gifts to their listeners by organizing concerts, offering free books and cinema tickets, organizing travel lotteries and other activities.”