The Decline of Independent Albanian Media 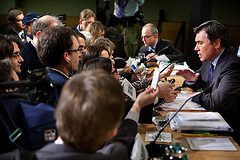 According to the newest Media Sustainability Index (MSI), Albania showed improvement in 2012, however the lack of independent outlets and unbiased journalists is cause for alarm.

The newest International Research and Exchanges Board’s (IREX) “Media Sustainability Index” begins by detailing the shortcomings in Albanian media – initially by pointing out that a growing number of media outlets have succumbed to a dependence on political parties, mainly the ruling party. In addition the report warns that independent members of the media and neutral journalists in Albania are a rare species quickly moving toward extinction.

According to recent public-opinion polls conducted by the Albanian Institute for International Studies (AIIS) and the Institute of Developmental Research and Alternatives (IDRA), the media system in Albania remains one of the most successful sectors in society despite recent volatility. In both polls the public considered the media to be among the most trusted sectors, however the implementation of the right to information from all public institutions remains problematic. The Law on Information gives Albania’s Office of the Ombudsman the right to supervise the law’s implementation, but journalists still have difficulty obtaining public information from administrative sources.

Typically journalists are forced to fight against favoritism, meaning some press outlets are granted access to information while others are denied based on their relationships within the administration. According to media critics, in spite of the lack of transparency found inside public administration offices, the journalists themselves are not properly taking advantage of the rights they are entitled to under the Free Access to Information Law.

Other issues identified by the report were censorship and self-censorship, which both contributed to a lack of professionalism within the Albanian media scene.  According to the MSI study, one of the causes of self-censorship is the high number of journalists who work without official contracts, meaning many staff-members are unprotected from the pressure shown by owners. “Journalists censor themselves due to the general social and political atmosphere,” explained Remzi Lani, an Albanian media expert quoted in the MSI report.

Albanian media expert Lutfi Dervishi also pointed to low staff numbers, which he claimed reduces the quality of work produced by newspapers both large and small. The Code of Ethics in Albania, approved in 2007 by the Association of Journalists and the Press Council, has not worked either.  To date the code has failed to take measures against journalists who violate the Code of Ethics, or respond to cases of hate speech, slander, or defamation.

While Albania’s, “supporting institutions” ratings improved in this years MSI study, the report’s authors note that the main obstacle when consolidating a representative media institution is the lack of solidarity within the media community.  The reasoning can be traced to the divergent political climate and the media’s affiliation with one camp or another.

Freedom of Speech and Plurality

The situation is more problematic regarding freedom of speech. Albanian press law is protected by a lone article in the constitution, which states generally that the press is free. Demand for a more comprehensive law regarding the press began in 1998, when the socialist government abolished former press laws immediately after gaining power.

According to the MSI report, Albanian politicians have shown little interest in breaking the impasse, which has lasted for several years.  Even after civil-society organizations drafted a comprehensive media law with help from the international community, the legislation ultimately lacked the political support in parliament to be approved.

Media experts consulted within the MSI report observed that crimes against journalists are not frequent, though journalists face sporadic obstacles in the course of their work. However, in cases when the perpetrators are state employees, the sanction often remains administrative (such as the dismissal of the state employee from work), while penal sanctions are not always applied.

Another area of slight decline was media plurality. Authors pointed to a lack of media coverage – specifically electronic media coverage – which in Albania covers only the largest portion of the population (about 80 percent), who mainly live in the Western Plain of the country.

In addition, there are a relatively large number of daily newspapers in the country, but none that reach the rural areas of Albania. The same can be said of the Internet, where penetration in the national range remains low, at less than 13 percent.

The weakest result in the MSI study was attributed to the “Business Management” objective (1.61), which as media experts say, “cannot possibly just mirror the weakening of the financial situation due to circumstances of the crisis, which are increasingly visible in Albania, too.”

MSI authors note that media bodies still remain far from acting as efficient businesses and continue to tolerate long-term losses, which are compensated by companies that function as genuine businesses and support the media. Perhaps only some of the largest media outlets, based in Tirana, have managed to cover their expenses with the revenue they generate, but even then without significant profit.

According to the MSI study, financial difficulties experienced by media outlets are beginning to effect journalists, which may be a result of an informal salary system within Albanian media. According to the president of the Union of Albanian Journalists (UAJ), Aleksander Çipa, 17 out of 23 daily newspapers have not respected the timely payment of salaries in the second half of 2011.

In the same period, according to UAJ data, 47 of 86 radio and television stations delayed journalists’ salaries for a period of two to five months. The minimum wage for a reporter working in districts outside the capital is about €200 per month while salaries for editors-in-chief and columnists can range from €800 to €2,500 per month.

The informality of media payrolls remains problematic and according to the president of the UAJ, most outlets contain two different versions of their fiscal records. One payroll is valid for the fiscal administration, but due to tax evasion this document does not accurately represent the real level of payment. The other payroll – kept secret and valid only for the internal administration of media finances – mirrors the actual salary levels for employees.

The same informality can be found in the Albanian advertising sector, which the MSI report attributes to media inefficiency in respect to business acumen. In addition the prices at this level are still not regulated on the basis of television audience sizes.  The media’s supportive businesses, which include advertising agencies and press distribution outlets, have not managed to consolidate and establish a unique market. For the most part, media organizations take care of their own advertising—and their own distribution in the case of newspapers.

» Ethics and Quality » The Decline of Independent Albanian Media