Germany’s AfD: With The Media And Against The Media 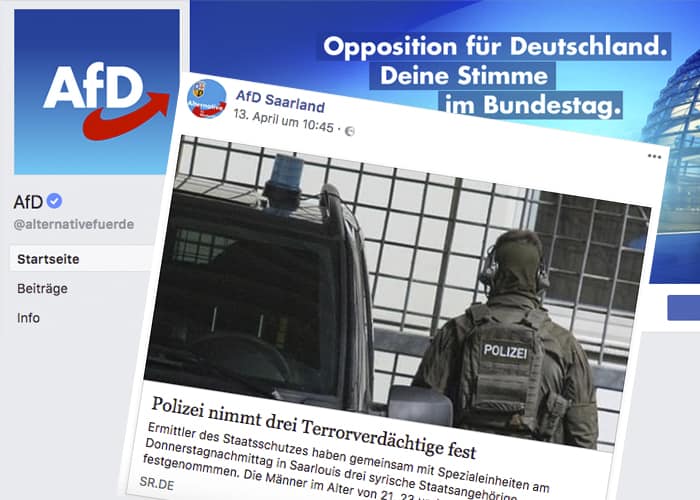 This is one of the results from our study on how German parties presented themselves on Facebook during the 2017 election campaign. For our study, we analysed all posts – as well as the reactions to them – of the seven largest German parties between 1st June and 23rd September 2017.

We found that, on average, 18% of all Facebook posts by German parties contained references to the media. But this average number does not tell the interesting story. While most parties were below this average (7%, Liberal Democrats to 16%, Christian Democrats), the right-wing populist party “Alternative für Deutschland” (AfD) referred to the media in almost half of all their posts (47%).

The AfD As A “Special Case”

Typically, most parties mentioned the news media as mere “channels” in which parties’ top personnel get attention (see Figure 1) – regarding the news media as useful multipliers. Such references were especially common just before and just after the television debates took place in the run up to the election. It also tells us something about how important television as a source of news still is for political communication in Germany. 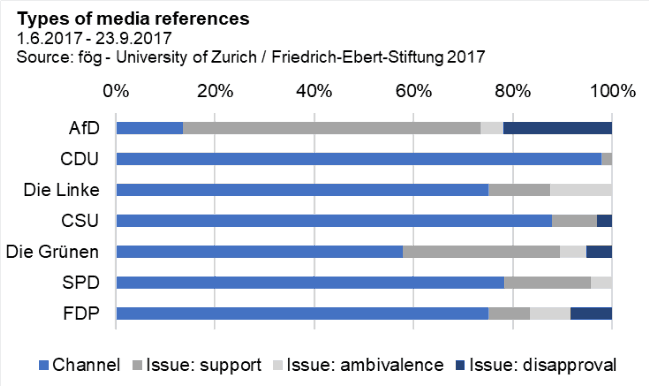 This chart shows the shares of the various Facebook posts that included at least one reference to news media (n=362 out of 2005 analyzed posts). By “channel”, we mean posts where parties refer to the media to indicate where a politician / a party finds attention. All posts coded with “issue” include references to the media that deal with issues or topics, for instance news coverage itself or the behavior of journalists. Posts with “issue” references could express a party’s “support” for the referred news media, “ambivalence” towards them or “disapproval”.

Compared to the “established” parties, the AfD referred to the news media in a strikingly different way. Not only did the AfD mention the news media more often than anyone else, they also referred mainly to the content of the news media (in almost 90% of their posts which make reference to the media). In this sense, the AfD is a special case in the German party landscape. Only the AfD emphasised issues “with the media” – that is, posting articles that corroborated their claims –  and positioned itself “against the media”.

The AfD – “With The Media” And “Against The Media”

Our study has shown that the AfD frequently attempts to underline the existence of political “problems” and support its positions by referring to the news media, particularly when it comes to the issue of migration. The AfD made use of well-known media brands such as the tabloid BILD and even trusted media brands such as the magazine Focus, the daily WELT or the public broadcaster ARD. In addition, the party referred to a whole range of different news media. The spectrum ranges from domestic to foreign news media such as (e.g. Spiegel Online or Daily Mail), from traditional channels to online-only outlets, and from respected, widely-known news brands (for instance, the FAZ or NZZ) to small “alternative” media (such as tichyseinblick.de or FPÖ TV, a “television” service offered by Austria’s right-wing populist governing party).

Positioning themselves “against the media”, however, is also a part of the AfD’s strategy, very much in line with what its audience allegedly wants and what empirically triggers strong counter-reactions from other parties and the news media. During the election campaign, the AfD was the only party that criticised the content of the news media and the news media themselves on Facebook. While the party attacked the media in general, a specific focus was on two of Germany’s public broadcasters (ARD and ZDF). Again, the AfD called for an abolishment of the licence fee for public service broadcasting.

Interestingly, the party never used the term “lying press” (Lügenpresse), which used to be a common slogan and central part of its media criticism. Instead, it talked about “fake news”, probably because this ubiquitous and often-misused term promises to resonate more broadly with parts of the German electorate. According to the AfD, the media is biased, unfair towards the AfD, supporting the established parties and prone to produce “fake news”. “Against the media” is clearly part of a discursive strategy typical for right-wing populist parties.

The Medium Is The Message

Of course, all parties tried to use Facebook to address potential voters directly – but not in the same way and not with the same success as the AfD. This is because an intensive and extensive use of Facebook especially fits the AfD and not other parties.

Why (not)? The frequent use of news sources and the frequent attack on the news together make the AfD’s Facebook page resemble not only an alternative channel but truly a type of “news media”. To borrow an idea by Benjamin Krämer, a scholar of political communication: Facebook as a medium itself becomes the message.

In the end, however, why this medium and this message have resonated still depends on much broader social and political factors. The interplay of right-wing populism and social media is a problem – but it is more likely a symptom and not the cause for the current success of right-wing populism.

This article is based on a study by fög, supported by the Friedrich-Ebert-Foundation (“Staging the political. An analysis of the content of and the reactions to the Facebook pages of German parties”). The study was published in mid-January 2018 and can be downloaded here (in German).

You may also be interested in “Stay In The News At All Costs” – Germany’s AfD.