“Stay in the News, at All Costs” Germany’s AfD 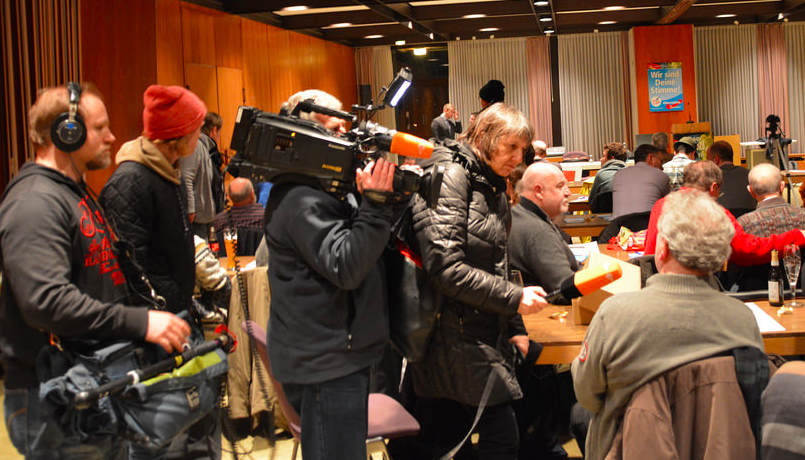 Journalists interview AfD supporters at a meeting in Germany

Angela Merkel narrowly won a fourth term as German Chancellor yesterday in the country’s general election, but arguably the real winner was the far-right Alternative for Germany (AfD) which won 13% of the vote. The populist party’s success in the polls has been attributed to its effective media strategy, formulated well in advance of the election.

A white-paper published in January clearly outlined how the AfD planned to dominate media coverage during the campaign: “The AfD shouldn’t refrain from carefully planned provocations”, the authors wrote. “The more the established parties try to stigmatise the AfD for its provocative words and actions, the better for the AfD.” In other words: “Stay in the news, at all costs.”

Despite the AfD’s candidness about its methods – something that should have been noted by Germany’s press – this strategy seems to have worked just fine. In an otherwise lacklustre election campaign the AfD succeeded in setting the agenda in the press and on social media, especially Twitter.

Only a few weeks ago, Alexander Gauland, deputy leader and co-candidate of the party, made headlines for saying that Germany’s integration minister Aydan Özoguz (SPD) – who has Turkish roots but was born in Hamburg – should be “disposed of” in Turkey. He later refused to apologise for the racist statement, which sparked further outcries among German politicians and the national media. Gauland, however, could be very pleased with himself as his remarks had achieved what they should: maximum attention.

His fellow leading candidate Alice Weidel, often seen as the right-wing populist party’s moderate voice, soon followed suit. Faced with critical remarks in a TV debate, Weidel suddenly stormed out of the studio and swiftly released a statement in which she accused the moderator of political bias – a little too quickly, as many commentators soon pointed out, hinting at the possibility that the walkout was deliberately planned and staged. Weidel, however, could pat herself on the back. In the days after the TV debate, all eyes were, again, on the AfD.

Finally, only last week, Alexander Gauland came forward with yet another controversial remark, demanding at a rally that Germans had a right to be proud of what their soldiers achieved during the first and second world wars – a claim which a majority of Germans, if asked, would probably find as outrageous as calls last January by the AfD’s Björn Höcke’s for a 180-degree turnaround in the way Germany commemorates the victims of the Nazis.

These tactical moves almost always follow the same recipe and almost always achieve their intended effect. Every provocation is followed by an outcry in the press and among other politicians. The AfD then flatly denies any wrongdoing and paints itself as a victim of the “fake news press” while it secretly revels in the media’s spotlight.

It doesn’t take much imagination to see why the populist party has repeatedly engaged in this type of behaviour during the campaign. For one, it has mobilised hard-core AfD voters and those who are dissatisfied with other parties but have not yet decided to cast their vote in favour of the self-proclaimed “alternative”. The more the AfD comes under attack, the easier it is for them to claim that the press is biased and that the German “establishment” doesn’t want the party to succeed – claims which are straight from Donald Trump’s political playbook but help the party to win over sceptics.

The AfD saw its popularity rise in the polls throughout the campaign. Starting out with 7% in June, the anti-immigrant party ended the campaign at 12% in the opinion polls. At the same time, their programme entered the public debate and was widely discussed, at times disproportionally in comparison to those of competitors.

A recent study of Twitter traffic during the German election campaign, by the Oxford Internet Institute’s Computational Propaganda Project, found that of nearly one million tweets studied, hashtags associated with the AfD appeared in more than 30%. The report concluded the AfD “absolutely dominates” German political Twitter traffic. Twitter is not as widely used in Germany as in other countries, however many journalists rely on the platform. So while it is still unclear to what extent the AfD’s social media strategy influenced voters, their social media presence has certainly helped capturing the attention of Germany’s media.

Felix Simon is a journalist and researcher and a graduate of the University of Oxford’s Internet Institute (OII). He is the former acting editor of the European Journalism Observatory and works as a research assistant at the Reuters Institute for the Study of Journalism. His writing on tech, politics, and the media has appeared, amongst others, in the “Frankfurter Allgemeine Zeitung”, “Die Welt” and “Der Freitag”, the Swiss “NZZ” as well as in the “Telegraph” and “The New European”. He has published in journals such as “Journalism Studies” and “Transformative Works and Cultures”. His research focuses on political communication in the digital age, big data in politics and the entertainment industry, as well as the changing nature of journalism and the media in the 21st century. He also takes a side interest in populism and the future of disinformation. He tweets under @_FelixSimon_.
» Media and Politics » “Stay in the News, at All...