The relentless march of the Hungarian government’s propaganda machine 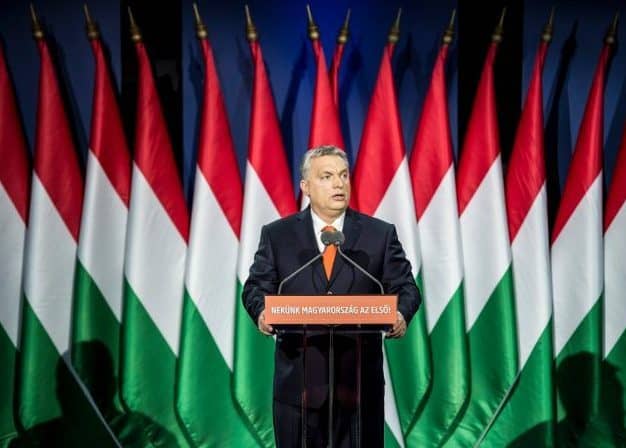 Most autocratic leaders do their utmost to maintain a tight grip over all sources of information in their country, but few in recent years have done this as systematically and as effectively as Hungary’s Viktor Orbán.

The figures tell the story: in May 2019, the independent media monitoring organisation Mérték revealed that a staggering 77.8% of the Hungarian news media is now either directly or indirectly controlled by the governing Fidesz party.

This overwhelming concentration of media ownership in the hands of the government and its allies received a significant boost in November 2018, when a dozen or so owners of some 500 pro-government media outlets transferred their assets to a newly-created foundation.

This body, known as the Central European Press and Media Foundation (KESMA for short, from the Hungarian form of its name: Közép-Európai Sajtó és Média Alapítvány) was overnight transformed into a massive media juggernaut in the service of Fidesz.

The aim of the move was according to KESMA’s articles of association to promote “national and Christian values” and “strengthen Hungarian national consciousness.”

The outlets that were brought into the fold of the new umbrella organisation were said to have been “simultaneously donated” by their owners – all Fidesz allies who had for years demonstrated their unswerving loyalty to Orbán by ensuring that their media never voiced criticism of his government’s policies.

Though the move did not have any impact on political allegiances – in that all the transferred outlets were already staunch supporters of Orbán and Fidesz – it reinforced the message that the government now wields almost total control over the domestic news media.

Furthermore, the possibility of any challenge to KESMA’s monopolistic position was immediately ruled out when it was exempted from regulatory scrutiny on the grounds that the new structure was of “strategic national importance.”

According to Zselyke Csaky, the research director for Europe and Eurasia at Freedom House, the level of control and consolidation in the Hungarian media meant that it was “beginning to resemble state media under Communism”.

But controlling almost all sources of information within the country appears not to have been enough for Orbán. With European Parliament elections looming, Fidesz’s suspension in March from the conservative European People’s Party bloc and speculation mounting over the formation of a new right-wing alliance after the elections, Orbán seems to have felt the need to push his message to a wider audience.

In April 2019, a new international news agency called V4NA was set up in London by several Orbán allies. The aim of the new agency, according to a statement on its website, is to provide “a conservative, right wing perspective of the key political, economical, cultural and other news critical to the EU and the world”.

V4NA’s reports were published in both Hungarian and English, to which French was soon added. The agency declared that it also intended to add other languages “at a later stage”. 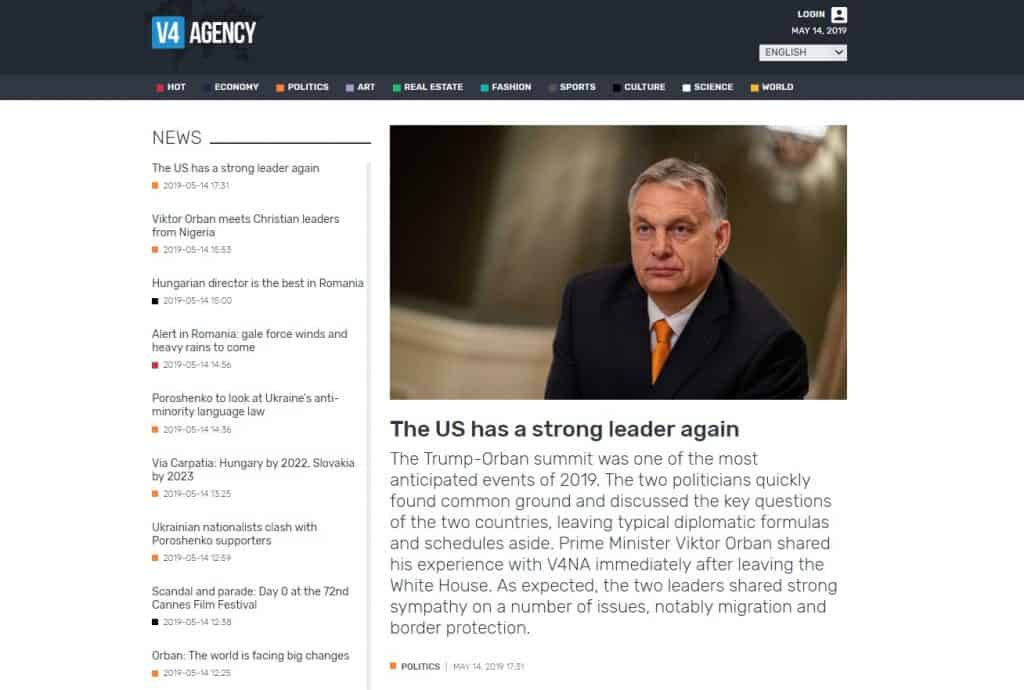 After Viktor Orbán’s meeting with President Trump in May 2019, V4NA stressed their shared views on migration

The full texts of its reports can be read only by paying subscribers, but the headlines and brief intros displayed on the front page give a clear idea of V4NA’s eurosceptic, anti-migration and anti-Soros stance – all key elements of Hungarian government propaganda.

The agency’s launch was met with some scepticism by international media outlets. Bloomberg said that the intention was to extend the reach of Orbán’s “propaganda machine”, while the Guardian noted that one of V4NA’s main aims appeared to be “to amplify Orbán’s nativist message outside Hungary.” Le Monde described Hungary as “a post-truth laboratory” and hailed V4NA’s “innovation” in becoming “the first site to charge for ‘fake news’.”

Though the agency’s website insists that it is independent, it was not long before some of the few remaining independent Hungarian media outlets unearthed evidence of the involvement of government allies in V4NA.

Válasz Online published details of the registration of V4NA at the UK’s Companies House, which showed that the majority shareholder (57%) was the New Wave Media Group – a pro-Fidesz publishing company now incorporated into KESMA.

Next in line with 40% of the shares is Danube Business Consulting. This political advisory firm is owned by Árpád Habony, for many years Orbán’s unofficial chief strategist.

Alongside his role as adviser to Orbán, Habony has also built up his own media empire. According to Válasz, his relinquishing of his media assets to KESMA last November gave rise to speculation that he had fallen from favour. However, Habony’s role in V4NA suggests that regardless of this, he has now been entrusted with the task of helping to get the Hungarian government’s message across outside the country.

The remaining 3% of the shares are held by Kristof Szalay-Bobrovniczky – who is none other than Hungary’s ambassador to the United Kingdom.

There can be little doubt of the sphere of influence to which V4NA belongs. But it remains to be seen whether the hefty investment that must have been required to set up a London-based news agency – which employs 50 journalists and now publishes content in three languages – will pay off in winning over any new converts to the Hungarian government’s way of thinking.

If you liked this story, you may also be interested in Hungary: Threats to Liberty, Autonomy and Diversity in Education and Media

Paula Kennedy is the editor of the English-language section of the European Journalism Observatory. She previously worked for Index on Censorship, where she was the editor of Mapping Media Freedom (a project co-funded by the European Commission). Before that she was a foreign news editor for the BBC based at BBC Monitoring. There, she specialised in the media of Central and Eastern Europe, producing in-depth media environment guides for the Czech Republic and Hungary and writing regular media-related features for the BBC news website. She tweets under @PMKennedy123.
» Ethics and Quality, Media and Politics, Recent » The relentless march of the Hungarian...