Algeria: Coronavirus and the media

The coronavirus arrived in Algeria just as a mass protest movement against the corrupt regime led by former president Abdelaziz Bouteflika was marking its first anniversary. The tough measures taken by the government in response to the pandemic have led critics to accuse it of seizing the opportunity to settle scores with protest leaders and independent journalists. As happens all too often in authoritarian states, the need to take decisive action to limit the spread of the disease is being used as a pretext for repression.

A representation of the Algerian flag on a wall in Algiers. Photo: Caroline Lindekamp

The number of confirmed cases of Covid-19 and of deaths attributed to the disease has risen steadily since the first case of Covid-19 was registered on 25 February. The epicentre of the outbreak was the northern wilaya (province) of Blida, where a total lockdown was imposed on 23 March. Partial lockdowns were subsequently imposed in dozens of other provinces. On 27 April, the government announced that lockdown measures would be extended until 14 May.

The facts and figures are always announced first by the Algérie Presse Service (APS) news agency. The state-run APS acts as a mouthpiece for the government and is the main vehicle for the dissemination of official information. In addition to conveying the casualty figures, APS has also published articles hailing the achievements of Algerian researchers trying to develop a treatment for Covid-19 and lauding the government for quickly and efficiently equipping hospitals to handle the crisis. APS prefers to draw a veil over the deficiencies of the overburdened health system. 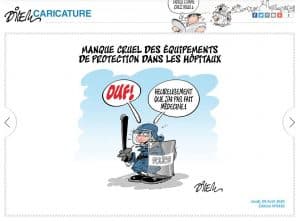 “Severe shortage of protective gear in hospitals”: A policeman in full riot gear congratulates himself that he didn’t go into medicine. Cartoon by Ali Dilem.

The celebrated Algerian cartoonist Dilem paints a rather different picture in the daily newspaper Liberté. Headlined “Severe shortage of protective gear in hospitals”, Dilem’s cartoon shows a member of the police force in full riot gear. In his speech bubble, the policeman expresses his relief that he works for the well-equipped security forces instead of for the badly equipped health service. The cartoon says it all: it is crucial that the authorities act swiftly to bring the pandemic under control, but in an authoritarian system, the suspicion inevitably arises that equipping the health service to tackle Covid-19 is less of a priority for the regime than hanging on to power.

Long-term Algerian president Abdelaziz Bouteflika’s announcement in February 2019 that he planned to run for a fifth term of office triggered a wave of peaceful protests against his corrupt regime. Demonstrators from all social classes and of all ages came together to march under the Algerian national flag as part of what became known as the “Hirak” movement. The protests forced Bouteflika to resign in April 2019 and a new presidential election was held in December, though the turnout for this was very low following opposition calls for a boycott. The protesters have not given up their demands and continued to hold weekly rallies until mid-March.

The military regime has been adopting increasingly tough tactics towards the protesters, arresting many of them. One of those singled out for harsh treatment by the authorities is Khaled Drareni, a prominent independent journalist and critic of the regime who has reported extensively on the protests. Drareni, the Algerian correspondent for Reporters Without Borders (RSF) and the founder and director of the independent news website Casbah Tribune, was arrested at the end of March and has since then been held in pre-trial detention in prison.

Concern has been expressed that Drareni and other protesters detained in Algeria’s overcrowded prisons are at high risk of contracting Covid-19. Despite these well-founded fears, the authorities are refusing to allow those in pre-trial detention to be transferred to house arrest. Indeed, the Ministry of Justice insists that there is no danger of any detainees becoming infected with the disease in prison. It maintains that it has taken all the necessary precautions, saying that prisoners are held in solitary confinement for two weeks after their arrival in prison, and are moved to other wings only after they have tested negative for coronavirus. The Ministry adds that all contact from outside – for  example from relatives – is forbidden.

Reporters without Borders (RSF) declared in a statement on its website: “We urge Algeria’s political class to adopt a clear position in support of a free, independent and pluralist press, an essential condition for a public democratic debate.” The NGO expressed its regret that “the Algerian authorities are taking advantage of the coronavirus epidemic to settle scores with independent journalism”. The statement concluded: “Imprisoning people in the middle of a pandemic is to compound a violation of basic rights with an act of physical endangerment.”

Calls for new state of emergency

There is already a precedent for this taking advantage of a national crisis to impose repressive measures. In 1992, the Algerian government declared a state of emergency in response to a wave of Islamist militancy and granted the army sweeping powers. The regime then maintained that its continuation was necessary in order to combat terrorism and kept it in place for 19 years, hindering the development of democratic structures and restricting the freedom of the press. It was not until 2011 that the government, bowing to the demands of Arab Spring demonstrators, lifted the state of emergency.

The regime has been relying on a long-familiar narrative to confound its critics.

Since the coronavirus pandemic reached Algeria, there have again been calls for a state of emergency to be imposed – this time not as a way of combating terrorism, but in the fight against the virus. Opponents of the regime have with some justification criticised the government’s and the military’s stance against the demonstrators and the handling of the pandemic. However, independent media such as the online radio station Radio M have also argued that the threat represented by coronavirus is real and that mass events such as protest marches put the lives of participants at risk and should therefore be suspended until the virus has been eradicated.

The regime has been relying on a long-familiar narrative to confound its critics: it claims that anyone who expresses an alternative point of view is a troublemaker out to manipulate public opinion. A report carried by the state news agency APS, for example, quoted an “expert in psychology” as warning people not to pay any attention to “rumours” that could induce a state of panic. According to the agency, the expert said that Algerian citizens were very susceptible to misleading information “disseminated by foreign media and on social media”. Statements such as these clearly form part of political propaganda.

In Algeria, social networks provide an alternative platform for public debate as they are comparatively free from state control and for this reason enjoy some credibility. But on the other hand, they also offer a fertile breeding ground for dis- and misinformation. Like Covid-19, the “virtual virus” of fake news spreads almost unchecked, in this case on the internet. This is not just an Algerian problem but a global phenomenon – as has been confirmed by Cristina Tardáguila of the International Fact-Checking Network (IFCN). Since the onset of the coronavirus crisis, fact-checkers worldwide have had their hands full trying to counter the flood of false information.

Back in April 2019, at the height of the anti-regime protests in Algeria, two Paris-based Algerians set up the Facebook page Fake News DZ with the aim of “revealing fake news and attempts to manipulate public opinion via social networks”. The founders of Fake News DZ had noticed an unusual increase in social media activity and a huge number of fake news stories obviously generated with the aim of discrediting the protesters. Within a year of its founding, the site had attracted almost 170,000 followers. Fake News DZ is blazing a trail for fact-checking in Algeria, but it is still something of a lone voice, as the systematic verification of news reports and social media posts has not yet become standard practice in the country.

The government’s response to the very real dangers caused by dis- and misinformation disseminated by conspiracy theorists and fabulists has been to pass a new law criminalising the broadcast of “fake news” deemed harmful to “public order and state security”. The law, approved by parliament on 22 April, has come in for criticism by free speech activists, who point out that it could be used to curb independent reporting of the government’s failings in tackling the pandemic. These deficiencies, such as the lack of adequate preventative measures in hospitals, have prompted some doctors to post videos on social media in which they draw attention to the difficult circumstances they are working under. The new law could be used to suppress such reports.

This is an updated version of an article that first appeared on EJO’s German-language site with the headline “Algerien: Die Korona-Krise und die Medien“.

The German journalist Caroline Lindekamp is studying for a PhD on media accountability in the Maghreb countries. She has been the holder of a scholarship from the Mercator Foundation, among others. She writes for the business publications Handelsblatt Online, Wirtschaftswoche and t3n, and is an analyst for the media trust ratings start-up NewsGuard. She also works in content marketing and public relations.
» Ethics and Quality, Media and Politics, Press Freedom, Recent » Algeria: Coronavirus and the media