‘The Refugee Crisis Is An Information Crisis’ 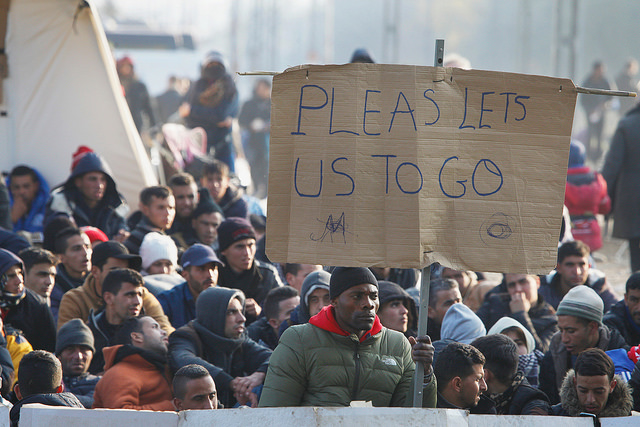 Refugees at the Greece-Macedonia border in 2015 plead for the border to reopen to the thousands upon thousands stranded there.

As refugees desperately search for reliable information, InterNews, a media NGO, has created a ‘rumour tracker’ to investigate and dispel the many false rumours circulating the camps.

“In Europe you won’t need money, everything is free.”

“If you apply for the relocation programme, they’ll send you to Venezuela.”

“The Netherlands are going to take all the refugees from the Greek camps, their people will drive here and pick them up. They are just waiting to have enough cars to transport everybody.”

These are just three of the many confusing rumours that migrants and refugees might hear. Some of them are downright dangerous, like the rumour that circulated last year: that you should puncture your raft before you arrive in Greece or else you would be sent back. Other rumours cause people to take risks or to take wrong decisions. And in the precarious situations in which refugees often find themselves, one wrong decision can spell disaster.

In response, the Mediterranean Rumour Tracker project seeks to better inform migrants of the facts. Fieldworkers who speak Arabic or Farsi strike up conversations with people in the Greek camps to hear which rumours are circulating. Consequently, they verify or dispel the rumours. This information is posted on a dedicated website and corresponding Facebook pages in English, Arabic, Farsi and Greek.

“With our Facebook pages, we reach about 350,000 people,” says Stijn Aelbers of InterNews, the organization that has set up the rumour tracker in collaboration with two other NGOs: Translators without Borders and ActionAid. “But we think face-to-face contact is just as important. People like to talk with a real person, they want to be able to ask questions.”

Traditional media often don’t reach migrants and refugees, because they are constantly on the move. The information they do get is from hearsay, from stories that circulate among their group. Aelbers says: “As many of these stories are unfounded or only half true, they run the risk of taking the important next steps on the basis of false information.’’

Rumours can also be damaging in other ways. Refugees that are told not to reveal to the authorities that they are Muslim, may be tempted to lie during registration procedures, which can cause problems later on. And rumours in refugee camps that some groups are treated better than others, or simply get better food, can lead to conflict and even brawls.

The rumour about the Dutch driving to the Greek camps has its roots in the announcement of Dutch activists that they would personally drive to Greece to collect people from the camps if the government wouldn’t live up to its promise to take up 4,000 stranded refugees.

“Rumours play an enormous role in every crisis.”

The concept of the rumour tracker was tried out earlier during the Ebola crisis in Liberia and during the earthquake in Nepal in 2015. “Rumours play an enormous role in every crisis, because people will always fill in the gaps in the information they get,” Aelbers says. “So when a government campaign informs them that Ebola kills, but they see some patients recovering, rumours spring up immediately that these people are ghosts.

“By dispelling rumours you can avoid huge problems. And this is certainly the case during the refugee crisis, where so many people are basing their survival strategies on false rumours. In a way, the refugee crisis is also an information crisis.’’

Shabnam Mortazavi is one of the four volunteers that work as refugee liaison officers for the rumour tracker in the Greek camps. Being of Iranian descent, she is fluent in Farsi, which not only enables her to communicate with Iranians, but also with Afghans, a large group among the migrants. She is visiting the official and unofficial camps on the Greek island of Lesbos.

“My work starts with simply talking to people,” she says. “I go up to them and ask them how they are and what’s challenging them. I give them useful information and try to build up trust. And then they start to tell me the rumours they’ve heard.”

She takes extensive notes of everything she hears. “Rumours are also a good barometer: they tell you what’s going on among migrants,” Mortazavi says. “The stories are changing all the time. When [last year] the Balkan countries where closing the borders for Afghans […], there were constant rumours that they would be admitted again soon.”

Rumours can be deliberately spread among refugees, to help sell services

Smugglers are also an important force when it comes to the dissemination of rumours. They spread stories about borders opening to persuade people to use their services, or to drive up the price. They might also tell migrants that in Europe everything is free, encouraging people to spend all their money on their passage.

When the Balkan route was still open, smugglers would say: once you come to Greece, you will be transported to Germany immediately. “I met people who believed this rumour and sold everything they had to come to Greece. They were devastated when they arrived and found themselves stuck in a camp,” says Nayief Salameh, Mortazavi’s Arabic-speaking colleague .

“But sometimes we are able to prevent people from falling in the trap,” he continues. “For example, Greek travel agents on the islands spread the rumour that migrants who book a ferry to Athens need to also buy a bus ticket to Macedonia. It was a lie to make more money – once people arrived in Athens, they found out there was no bus. It’s very helpful when you can dispel such rumours.”

In the autumn of last year, InterNews started a project that was specifically aimed at children. In collaboration with the NGO Save the Children, a program was set up to encourage children to make drawings, tell stories and make photos. The aim was to see whether this would yield useful information that adults wouldn’t share.

“And it did,” says Aelbers. “For example: on one location the children said they didn’t like to go to school because everybody only spoke Greek. But on another location the children told us that they really liked going to school. Often parents don’t know these kind of things. For us it was a good incentive to find out why refugee children are unhappy at some schools and to see how this could be changed.”

InterNews has been for some time thinking of setting up a rumour tracker for Italy, where the majority of migrants and refugees are now entering Europe. “But unfortunately, funds are lacking to set up an Italian project, so we are still looking for donors.”

Aelbers believes that the need for the rumour tracker service highlights the failure of larger NGOs to keep migrants informed. “[They] tend to be quite reluctant to provide information. Sometimes that’s good, because the situation changes every day. But it is not always in the best interest of the migrants. Our approach is different. We work with information given by refugees.’’

InterNews’s motto is that communication is aid. “Migrants and refugees often feel cut off from the world,” Aelbers says. “There are not many people who speak their language, and even fewer people are prepared to listen to them. And they seldom come across someone who says, ‘OK, I am going to find out whether this story you’ve heard is true and give you helpful information’.”

This article was originally published in the Guardian, August 2016

Renate van der Zee is a Dutch writer and journalist. She has written for the Guardian and Al Jazeera English, among others, and focuses upon women's and human rights issues. Van der Zee has authored books about human trafficking, 'honour violence' and prostitution.
» Media and Politics, Short stories » ‘The Refugee Crisis Is An Information...