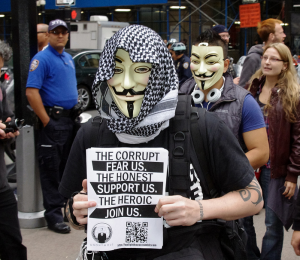 Social media has been credited with playing a pivotal role during recent mass protests, such as EuroMaidan in Ukraine, the Arab Spring, and the unrest in Ferguson in the United States. But despite the apparent evidence of a link between online activity and public protest, it has always been difficult to prove.

Their study Tents, Tweets, and Events: The Interplay Between Ongoing Protests and Social Media, focuses on three recent cases: the 2011 Spanish May 15 Indignados movement; the 2011 International Occupy movement, and 2013 anti-government unrests in Brazil (known as the Vinegar protests, as more than 60 protesters were arrested for carrying vinegar, a popular toxicide for police tear gas).

The study aimed at finding out whether the protests were followed by equal activity on Facebook and Twitter, whether they evolved co-extensively and had a two-directional determination and, finally, whether networked communication on Twitter and Facebook had any impact on the subsequent developments of the onsite protests.

The researchers tracked almost 100 Twitter hashtags related to the three protests studied, (about 35 hashtags per event), as well as 100 Facebook pages and groups devoted to those events. When selecting hashtags, researchers focused on information streams associated with cities rather than conceptual tags such as #nolesvotes (do not vote for them) or #notenemosmiedo (we are not afraid) in the case of Indignados; #occupytogether during Occupy or #todarevolucaocomeca (every revolution starts with) over Vinegar.

The researchers explained this decision with an assumption that activity on city-related hashtags and Facebook groups would have a closer relation to onsite demonstrations.

Data was collected from the publicly available Twitter stream with the service of yourTwapperKeeper  (user’s private information was extracted). In order to measure causal connectivity across different instances of political unrest, researchers modelled the data as random time series and performed a Granger-causality test, a statistical hypothesis test for determining whether one time series is useful in predicting another. The researchers claim it is the first attempt to apply the test to such a study.

The findings revealed that effective prediction of protest activity appears to vary in different cases of political unrest.  Researchers observed that communication on Twitter and Facebook had forecast onsite protests during Indignados and Occupy.

By contrast, in the case of the Vinegar protests, “the direction of the prediction was only from online to online, and onsite to onsite – between Facebook and Twitter and also from protestors to injuries and arrests”, researchers found.

In case of the Indignados movement, a rather one-way relationship from online to onsite protest activity was observed.

The study also found that Twitter played a more significant role in the coordination of logistics than Facebook in the cases of Indignados and US occupiers.

The authors of the study conclude that although prediction of protest activity is very much context-driven and one can expect various modes of protests’ development, their research provided evidence to the claim that online activity can predict onsite activity.

Source: this article was first published on the Ukraine EJO website

Halyna Budivska is a PhD student at the Mohyla School of Journalism, National University of Kyiv-Mohyla Academy. She is also the editor of the Ukrainian website of the EJO.
» Media and Politics, Short stories » Tents, Tweets And Events: Social Media...