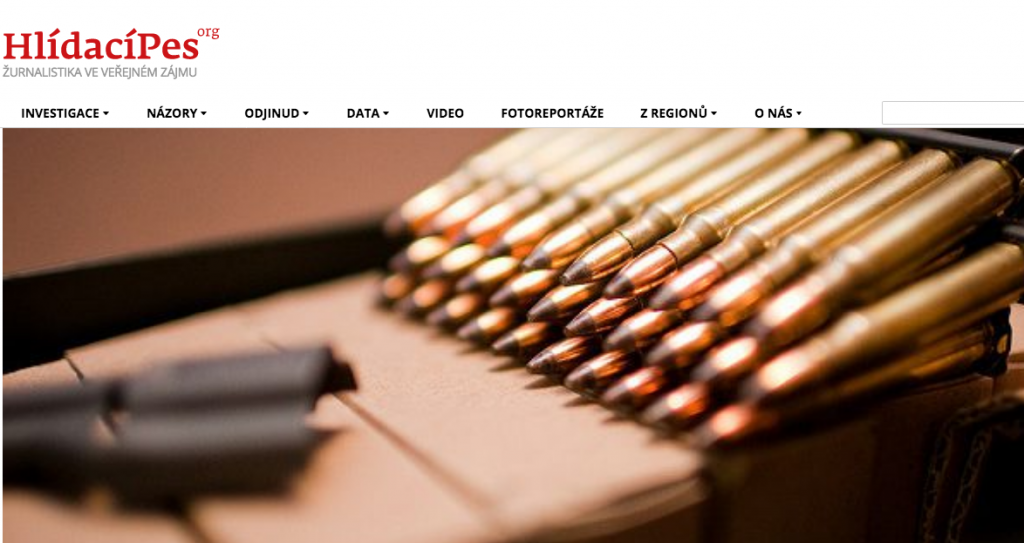 Image illustrates report about the Soviet occupation of the Czech Republic, published by investigative site HlidaciPes.org.

After the 2008 economic crisis, western media companies sold their interests in the Czech Republic’s biggest media houses, radio stations and newspapers to Czech and Slovak billionaires.  The concentration of media in the hands of a few powerful owners has had an unexpected, but positive impact. It has led to the emergence of smaller, independent investigative journalism sites, as well as new initiatives to fund them.

The Czech Republic’s new media oligarchs include Andrej Babis, a leading politician and owner of the country’s biggest-selling newspapers who has openly used his outlets to promote his political and business ambitions. Daniel Kretinsky, head of an energy conglomerate and newspaper owner, and Zdenek Bakala, former owner of a mining company who now owns a business daily, are among a number of other billionaire businessmen turned media proprietors. Such conflicts of interest have caused many journalists to leave their traditional newspaper or broadcast jobs to establish new, independent outlets.

Successful investigative projects developed by new media include sites such as Hlidaci Pes and Reporter Magazin – both founded by journalists who resigned from their former jobs after new owners tried to manipulate content. These sites have covered stories about prominent Czech organized crime figures, mapping suspicious Chinese investments and monitoring links between Czech business and politics.

The impact of their reporting can be measured partly through recognition at journalism awards, but also through the number of times their stories lead to police investigations and convictions.  Yet, despite their successes financing these sites is a challenge. Until recently there were no state or private funds to support investigative journalism – and oligarch media owners show little interest unless they can control the outcome of investigations.

However, at the end of 2016, a group of Czech business men and women created The Endowment for Independent Journalism (Nadační fond pro nezávislou žurnalistiku, NFNZ.cz). One of the funders, Silke Horakova, states on the NFNZ site that the project aims to defend media freedom in the Czech Republic. “I regard independent journalism as a guarantee for social debate on the basis of European democratic values.” NFNZ has collected money and created a committee to serve as a buffer between the donors and journalists. They recently issued their first grants and will soon evaluate the impact of funded projects.

Other teams covering investigative stories are those based with national public broadcasting companies. Czech Television and Czech Radio have done excellent work on delivering investigations focused on public health, foreign policy and regional politics. Until now, no Czech politician has resigned because of investigative journalism, although a number of reports have had a significant impact.

Czech investigative journalism remains locally-focused, despite the success of a number of recent cross-border investigative projects, such as a report about gun trafficking with Ukraine, by Janek Kroupa. This may be because readers are not interested in foreign stories, or because Czech journalists are less willing to collaborate internationally.

Competition between small independent outlets, to break news, create more content and report stories in an accessible way, could also be hindering collaboration among journalists. The competitive media environment makes it harder for journalists to take the time needed for in-depth reporting, for joint-projects and knowledge sharing.

Yet some of the best recent examples of investigative journalism have been based on international cooperation. These include the Pulitzer Prize winning Panama Papers, the Global Laundromat, an investigation into Russian money laundering, coordinated by the Organised Crime and Corruption Reporting Project and Project Khadija.

Project Khadija was so named after investigative reporters worldwide took over the work of Khadija Ismailova, an Azerbaijani journalist who was jailed for exposing the foreign assets of Azerbaijan’s presidential family. Journalists joined forces to continue Ismailova’s reports, and demonstrate that jailing a reporter would not suppress the reporting. Ismailova was originally sentenced to seven and half years in prison, but following international pressure she was conditionally released after eighteen months.

For investigative journalism to thrive in the Czech Republic, journalists need to feel a sense of solidarity, to be able to trust each other, cooperate and share resources and knowledge. As long as outlets compete for audiences willing to pay for news, and funding remains scarce, this looks unlikely. But initiatives such as NFNZ.cz provide hope that the country’s independent media, and especially its investigative journalists, will be able to develop and grow.

Pavla Holcová is the founder of the Czech Centre for Investigative Journalism.


You may also like: How video is changing the news in the Czech Republic;  Fighting fake news, disinformation and hate in Czech media

Pavla Holcová (@pafak) is the founder of the Czech Centre for Investigative Journalism, where she has investigated cases concerning Serbian organized crime figures, Macedonian secret service investments in Prague, money laundering, and offshore companies. She is a co-recipient of the Global Shining Light Award and European Union investigative journalism prize. She is closely working with Organized Crime and Corruption Reporting project on various international projects and investigations. Before founding the Czech centre, she worked for six years at the People in Need humanitarian and human rights organization as head of the Cuban section and for Europe’s largest developer of open source tools for news media Sourcefabric.
» Media and Politics, Specialist Journalism » Guns, Crime, Politics…and Media: Investigative Journalism...