The coronavirus crisis has shown the extent to which disinformation can be a threat to public debate and an informed citizenry. Asma Abidi assesses the contribution made by the latest edition of the Verification Handbook to equipping journalists to distinguish between truth and falsehood and helping them provide the public with trustworthy information. 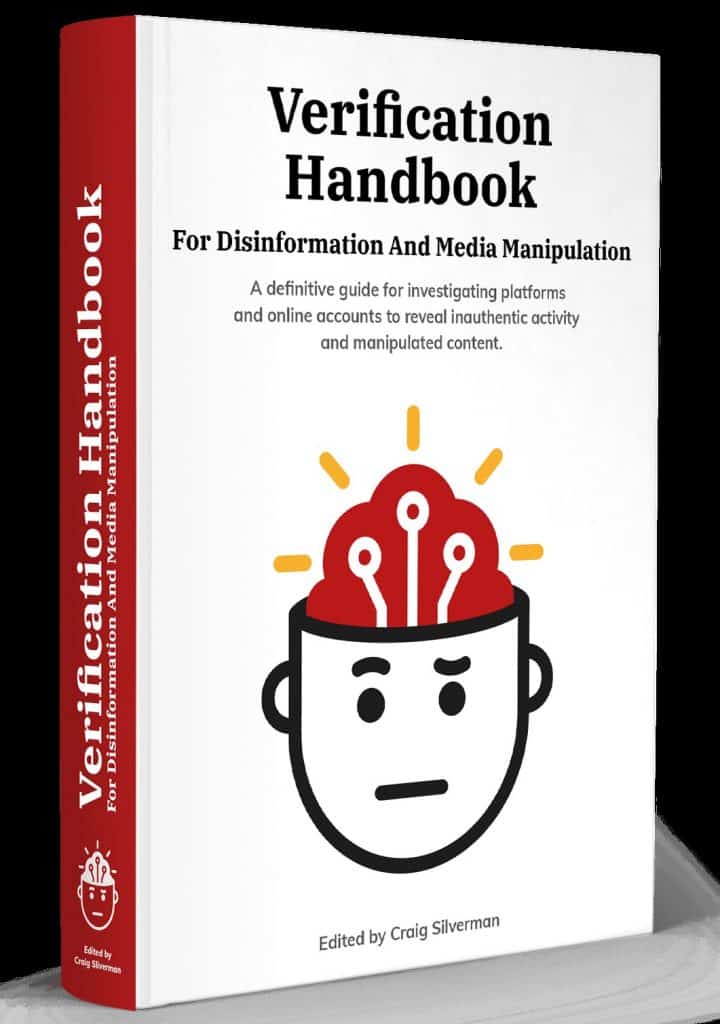 The latest edition of the Verification Handbook offers invaluable advice to journalists attempting to navigate a chaotic information environment.

The third and most recent edition of the Verification Handbook, published by the European Journalism Centre, bears the subtitle “For Disinformation And Media Manipulation” and aims to provide journalists with the knowledge and skills they need to investigate social media accounts, bots, private messaging apps, deep fakes, and other forms of disinformation and media manipulation.

In his introduction to the latest edition, editor Craig Silverman cites a case study demonstrating how viral content, with its ability to convincingly mimic reality, can often mislead even the most eagle-eyed journalists. Silverman points out that debunking a false story may be no more than a Google search away, but editors can still be led astray by what they think they know. They can also be fooled by digital signals such as large numbers of retweets and views.

Claire Wardle, the director of the US organisation First Draft, has contributed a chapter to the introduction, “The Age of Information Disorder”, in which she explains her objections to the blanket use of the term “fake news” to describe any kind of dis/misinformation. According to Wardle, “fake news” is a woefully inadequate label that does not even begin to convey the complexity of the problem. She also decries the way in which the term has been weaponised, mostly by politicians intent on undermining the credibility of professional news media. Instead, Wardle sets out a template consisting of seven common forms of information disorder: parody or satire, false connection, false context, misleading content, imposter content, manipulated content and fabricated content. She insists that “language matters”: it is vital that the correct terms are used to describe such phenomena. Wardle’s contribution to the handbook also usefully explains the difference between misinformation, disinformation and a newly created term: malinformation (genuine information shared with the intent of causing harm).

The contributions of all these world-class journalists and technology experts… make the Verification Handbook a fantastic resource.

The Verification Handbook also contains a substantial chapter devoted to investigating social media accounts, which looks at how to search for people taking their usernames, emails, photos and relationships as starting points. Brandy Zadrozny,  an investigative reporter for NBC News, shares with readers her top tools and recommended methods for unearthing clues to the identity of the people behind particular social media accounts. Tools like Pipl and Skopenow help journalists and investigators cross-reference “real world” information such as phone numbers and property records with online records such as emails and usernames. Namechk can be used to check out username availability across multiple platforms. A chapter headed “Spotting bots, cyborgs, and inauthentic activity”, by two investigators with the open-source investigations team Bellingcat, describes some tools and techniques for unmasking Twitter bots, among other things.

Journalists and editors who need to verify visual content are encouraged to use standard tools such as InVID, Yandex Image Search, TinEye, Google Image Search and Forensically. The handbook also points readers in the direction of external resources such as the First Draft Visual Verification Guide, which can be used to verify and fact-check images and videos.

Journalists and activists are increasingly the target of threats made by the perpetrators of conspiracy and disinformation campaigns online. Sam Gregory, an internationally recognised human rights advocate and technology specialist, has contributed a chapter to the handbook that aims to give readers a basic understanding of how deep fakes and synthetic media work.

Investigative newsrooms working on major issues such as political advertising and microtargeting during elections can certainly benefit from the chapter devoted to exposing the perpetrators of political targeted ads that sow disinformation relating to vital political or social topics. Bellingcat‘s open-source investigator Johanna Wild describes how it is now possible for investigative teams to use the ad libraries created recently by different social networks to check out the origins of ads published on Google, Facebook, Twitter and Snapchat during elections. Wild notes that journalists who take the trouble to get to grips with the hidden features of these ad libraries will find that they are an easy and powerful addition to their digital investigations toolkit. The chapter includes a step-by-step guide to the major platforms’ ad libraries.

The handbook contributors also focus on several cases of manipulation and disinformation from the Philippines, the United States, Hong Kong, Brazil, Indonesia and the United Kingdom.

The contributions of all these world-class journalists and technology experts, who between them cover an impressive range of topics, make the Verification Handbook a fantastic resource providing invaluable guidance on how to go about investigating online manipulation and disinformation campaigns.

If you liked this story, you may also be interested in Verifying Sources, a Handbook for the Digital Age.

Asma Abidi is a freelance journalist from Tunisia. She graduated from the Bonn-Rhein-Sieg University of Applied Sciences and the Deutsche Welle Akademie after completing a Masters degree in international media studies. She teaches workshops on fact-checking and verification as well as on diversity and inclusion in newsrooms. Asma's main interests are new media, investigative journalism, fact-checking and storytelling.
» Ethics and Quality, Recent, Specialist Journalism » Verification Handbook: equipping journalists to combat...