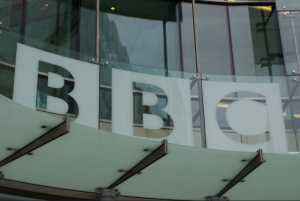 The BBC has become a “comparatively small player”, dwarfed by multinational platforms, yet it remains central to Britain’s culture and should be supported, not undermined, by the government, according to Lord Patten, the former BBC chairman.

Lord Patten argued the BBC would need investment and possibly legal protection to protect its publicly-funded UK content.  Broadcasters across Europe are facing the same threat, he added “It is a big issue for smaller European broadcasters and, without wanting to become protectionist, I think there should be more cooperation between European public broadcasters on the issue. The threat [from technology companies] is a real one and I believe we should be more concerned about that than we are,” he said.

“The world of electronic media is changing faster than ever,” he told an audience in Oxford. “Driven … by the extraordinary evolution of connectivity and data transmission, of mobile devices, set-top boxes and internet TVs – a jungle of new platforms inhabited by the big beasts of the tech world.  They want to get their hands on as much of the BBC’s content as possible, to slice and dice it for their own convenience,” he added.

“No wonder the BBC sometimes feels besieged,” he said. “By Government.  By the Press. By Sky. By Google. By Apple. To survive it needs to negotiate and strike bargains with all its giant competitors.”

“I do not think that You Tube and Google have meant the end of good news organisations but I do not think that [government] ministers really understand how the flow of information is being controlled by these big organisations. It just takes one tweak from an algorithm can make a big difference to what people see. Personally I find it a bit spooky,” he said.

Lord Patten, who delivered the Reuters Institute lecture entitled “The Future of the BBC” at the University of Oxford last night, said the BBC’s independence must be protected from government interference. The corporation should be held to account by the public, not by the government, he believes.

“Politicians may represent the people who own the BBC, but they do not own it themselves. We all own it, because we all pay for it – not through our taxes, but through our Licence Fee.   This is not just another tax. It is payment for a service.   We don’t pay the Treasury: we pay the BBC. So I am clear that although the BBC must report to Parliament about its performance, it must answer to the public when things go wrong.

“The BBC needs to be regulated but it doesn’t need to be intimidated.  The crucial regulator of the BBC is the trust that its viewers and listeners have in it.  Maintaining public trust, not Parliamentary favour, should be the BBC’s constant concern.”

Lord Patten acccused the government of conducting ‘smash and grab’ raids on the licence fee that by 2021 would lead to losses of “hundreds of millions of pounds a year”. He said the BBC’s real income has already fallen over the past decade by more than 15% while in the past five years alone BSkyB’s revenues went up by more than 16%, and ITV’s increased by 21%.

He called for a one-off charter of eleven or twelve years to “break the link” between charter renewal and new fixed-term parliaments.  He also advocated the establishment of a “new, small Commission to guarantee the independence not just of the BBC but of all broadcasting.  It would have three main roles,” he said.  “First, it would appoint the Chairman and non-executive directors of the BBC.   Second, it would recommend and publish proposals for future levels of BBC funding.   Third, it would appoint the Chair and deputy chair of Ofcom.” Such a commission, he added, could prevent future “government raids on the licence fee.”

Lord Patten, who is Chancellor of the University of Oxford, said that it was time for him to “intervene” in the public debate over the BBC’s future as the government prepares to publish its White Paper this month.

“Since I stood down as BBC Chairman almost two years ago, I have said very little in public about the Corporation’s future.  But it seems appropriate that I now make one – and perhaps only one – intervention,” he said.

Caroline Lees is the Head of Communications at the Reuters Institute for the Study of Journalism. She is the former editor of the European Journalism Observatory’s English language site. She is a British journalist and has worked for The Sunday Times, London, for seven years including time spent in Delhi as South Asia Correspondent and as a news reporter and arts correspondent. She has also worked as foreign editor and assistant editor of The Scotsman, and for the Economist and Telegraph Media Group.
» Media and Politics » European Broadcasters Threatened By “Big Beasts...