A Question of Credibility 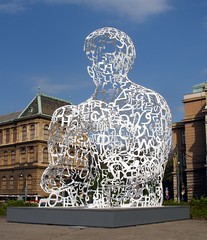 Journalism is more than thorough research and investigation. It also includes the open handling of sources.

How transparently do U.S. and German quality daily papers work? Access to information is easier than ever before. Journalists are supposed to provide readers with orientation by evaluating data and facts. But the more easily accessible sources there are both on the Web and otherwise, the more important it becomes to assess them. Coverage can only be considered fully transparent if articles provide information about the sources they are based upon. How important is transparency for quality daily newspapers? Do U.S. papers take transparency more seriously? Are differences in transpareny of newspaper articles an indication of different journalistic cultures?

A final thesis at the Technische Universität Dortmund investigated these questions. The analysis included two German and two U.S. quality daily papers: The Frankfurter Allgemeine Zeitung (FAZ), the Süddeutsche Zeitung (SZ) as well as the New York Times (NYT) and the Washington Post (WP). In essence, the study showed that articles in the FAZ and SZ were almost consistently less transparent than articles in the NYT and the WP. Some differences between single papers and the two countries were remarkable.

The majority of statements are backed with a source

The first step was to identify all factual statements made in selected lead stories on the front pages during a 14-month period. The percentage of statements not corroborated by a source given in the text was 23.5% for NYT and WP articles. For the FAZ, that percentage was 25%. In SZ articles, no source was given for about one in three statements (31.3%).

At first glance, the papers seem to be doing a good job with providing transparent information to their readers. More than half (and in most cases more than three-quarters) of factual statements were accompanied by a source. This seems to be a decent level of transparency for newspapers. After all, press articles are not scientific essays. But the basic difference between statements with or without sources is misleading. The overall level of source transparency in the articles was lower than these preliminary findings suggested.

A closer look at the statements accompanied by a source in the article showed that the indication of those sources varied a great deal. Many scholars (Russ-Mohl 2003, Weischenberg 2001, Zschunke 2000, among others) have suggested a three-pronged approach to evaluate these variations:

First, the originator of a piece of information. Second, the channel through which the journalist becomes aware of that piece of information. And third, the level of concreteness with which the originator is identified. Depending on how a source is indicated in an article, factual statements can be divided into four groups: statements with the highest, high, medium and low levels of transparency. (One could argue that statements without a source constitute a fifth category with “no” transparency. For the further analytical purposes of this study, such a category is not necessary. The question of whether no transparency is the lower end of a transparency continuum or something else altogether won’t be discussed here further; it is philosophical.)

Some examples from the newspapers will help to illustrate the different dimensions and levels of transparency.

■ Highest transparency: An article in the NYT contained quotes by an Israeli army officer. It also included his full name, rank, position as well as the fact that the journalists interviewed him on the phone. This statement fulfilled all transparency dimensions.
■ High transparency: A SZ article quoted a cabinet member. Her name and administrative position were included, which covered the dimensions “originator” and “concreteness”. The dimension “channel”, however, remained unclear: Did the journalist talk to her in a face-to-face interview? Did they talk on the phone? Was the quote taken from other media?
■ Medium transparency: The WP based one statement in an article about the terrorist attacks in Mumbai on a statement by the Indian police. This covered the dimension “originator” (a police officer rather than, say, a government member or a scientist). However, the article didn’t give any further information about the source. It remained unclear whether the statement was made by a police officer on the scene, a spokesman or a high-ranking police administrator (“concreteness”). The reader also isn’t told how the journalist got hold of the information (“channel”).
■ Low transparency: The FAZ based a statement in an article about a government initiative on “media reports.” This source didn’t give the exact originator (TV? Radio? Online?) and also failed to provide full disclosure in the dimension concreteness (Which TV station? Which radio program? Which website?) Naturally, the channel for the flow of information to the journalist also remained unclear.

Investigative reporting as an exception

The study focused on statement with highest or high level of transparency. This approach was chosen because the analysis showed that sources cannot always be given specifically in order to protect sources. Investigative reporting is based upon granting informants anonymity because they have to protect their safety, job, or family.

Sources in different categories of transparency

The results were slightly different for the papers’ coverage of a common topic. When the papers backed up their statements in G8 articles with a source, most of the time they did so with sources in the “highest” or “high” category. The exact percentages were 84.3% for the FAZ, 85.1% for the WP, and 87.7% for the SZ. In the NYT summit coverage, for 95.7% of statements that had a source at all, that source was in the highest or high category of transparency.

While articles (i.e. only the text) didn’t have a source for every factual piece of information, the transparency of illustrative elements such as photographs, diagrams or charts was close to perfect. Not only could the reader understand in great detail what was being shown, but he was also provided with detailed information about where the picture or the informational content of diagrams or charts came from. The articles in the study contained a total of 322 illustrative elements (FAZ: 32, SZ: 22, NYT: 115, WP: 153).

The German papers had a source (e.g. photographer) for every picture and diagram or chart. These indications of sources were missing for one photograph and one diagram in both NYT and WP articles. Both U.S. papers also had one photograph each where the picture was not accompanied by a caption. Generally speaking, “photo credits” seem far more common than “information credits.”

Articles in U.S. papers have higher levels  of transparency

In summary, it can be said that the articles of both U.S. papers were – with two exceptions – quantitavely (percentage of statements with a source vs. statements without one) and qualitatively (transparency level of sources) more transparent than articles of German papers. This was always true if one looked only at the lead stories on the front pages, which accounted for the majority of all articles in the study (see “Scientific method”).

Throughout the study, one thing remained unchanged: The NYT was always on top. Its coverage (lead stories on front pages and G8) was the most transparent of all four papers – both quantitavely and qualitavely. And generally speaking, U.S. papers did better than German papers. What is to be concluded from these findings?

Trying to identify causes for differences between German and U.S. papers is beyond the scope of this study. No factor responsible for these differences could be singled out. For example, the data does not support the notion that more sources lead to higher transparency.

Some articles had a high level of transparency but contained only very few different sources. One example is an article which mainly consists of paraphrased interview quotes. On the other hand, there were stories which had an abundance of sources and still contained a high percentage of statements which were not accompanied by a source in the article. Investigative stories are typical of this.

In trying to explain the differences between German and U.S. papers, it seems promising to look at different journalistic cultures in the German-speaking and Anglo-American world. Many research projects have pointed out differences between German and U.S. journalists, for example in the way they gather information (Cario 2006, Redelfs 1996) or their professional values (Weaver/Wilhoit 2003, Hallin/Mancini 2004). It is fair to say that U.S. journalists are more eager to follow the ideal of the neutral reporter who labels his sources of information as specifically as possible in order to make his coverage as objectively as possible. A feasible explanation for this characteristic of U.S. journalism is the different development of the media systems in both countries.

There are many reasons why newspapers should be open with their readers about sources of information.

■ Source transparency is one quality criterion for articles (see Russ-Mohl, Weischenberg). It can serve as an internal authority of quality control. Journalists should show that their stories are thoroughly researched and let readers know where the information comes from.
■ A high level of source transparency is a way to separate yourself from the pack. It comes as no surprise that the NYT, which many scholars consider to be the best newspaper in the world (Ruß-Mohl 2001), had the highest level of transparency amongst the papers analyzed in this study.
■ Source transparency is an excellent instrument to increase a paper’s credibility. Journalists cannot assume that readers will trust them just because the paper has a reputation as a reliable source of information. Such reputations can deteriorate very quickly. This is especially true since readers can crosscheck information and claims easier today than maybe ever before.
■ Finally, transparent coverage is of great service for society because it advances an enlightened audience. One could say that the “public’s right to know” does not only refer to the right to know what’s going on. It also means the right to know where statements and information come from.

The study was conducted as a content analysis which combined quantitative and qualitative elements. Two German papers (Frankfurter Allgemeine Zeitung and Süddeutsche Zeitung) and two U.S. papers (New York Times and Washington Post) were part of the sample. The analysis included 283 articles. 232 were lead stories selected on 59 systematically chosen days during a period of 14 months. The other 51 articles didn’t have a common date of publication but a common topic, the G8 summit in Japan. The summit coverage was chosen as a object of study to avoid cultural bias. The summit had the approximately same political, cultural and geographical distance from both Germany and the United States.

This two-pronged selection took specific characteristics of each paper into account while at the same time allowing multiple possibilities of comparison. The analysis was carried out in several steps. To start, empirical properties of each article such as day of publication and article length were measured. The next step was to examine each factual statement (defined as one complete piece of information) regarding its source transparency. For analytical purposes, source transparency was split into three dimensions: Originator, concreteness of his identification, and channel through which the journalist got hold of the information. Every statement revceived a code for each dimension. 11,120 statements were analyzed with 33,360 codes.

Author Benjamin Schulz works as a freelance journalist for Spiegel Online. He has a diploma of journalism and political science from the Technische Universität Dortmund.

» Ethics and Quality » A Question of Credibility