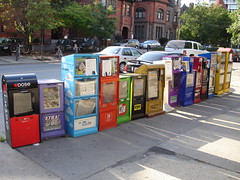 Which business models will finance quality journalism in the future?  A look at strategies from the U.S.

How are journalists to  survive?  Plans to rescue journalism from Wall Street’s grasp are vast and contradictory. Fortunately, some proposals can be consolidated into a handful of feasible alternatives. In light of crashing newspaper stocks, U.S. business analysts John Morton and Allan Mutter speculate that former newspaper owners – who, in most cases, still hold shares and voting rights – may find it profitable to buy back stocks.

In Morton’s view, this would be a “lucky event,” as the transfer of media companies to shareholding enterprises has often damaged “good newspaper journalism.”  According to a recent research report by the Project for Excellence in Journalism, conditions for such purchases are favorable as listed shares of U.S. newspaper companies lost 83 percent of their value in 2008 alone.

However, there’s a catch (or three).  First, even prudent investors need a business model, and thanks to the Internet, intensified competition and the public’s expectation of “free” news, print media’s traditional business model seems to have disintegrated.  Additionally, family business owners are not better entrepreneurs, per se. On the contrary, history shows that second and third generations of dynamic and successful founder entrepreneurs are often less efficient and at odds among themselves. Finally, the notion of  “culturally involved capital” appears to resemble a pseudo-scientific paraphrase for a ruling patriarch. Would we really prefer the likes of Axel Springer or Hans Dichand? As a democracy – despite the crisis – we can’t dream of a monarchy.

Without exception, newspaper publishers have adopted cost cutting initiatives. To remain competitive, some have cut spending so drastically that the struggle to survive has certainly intensified. Murali Mantrala and Esther Thorson, leaders of a research team at the University of Missouri, analyzed and evaluated several newspapers’ financial data over a period of several years. They found that most newspapers spend too much on distribution and advertising and too little on editorial departments. Of all rescue strategies, cost cutting is the least innovative tactic employed to solve current predicaments. Newspapers resorting to aggressive spending reduction, for instance the Los Angeles Times and the San Francisco Chronicle, suffered dramatic edition losses.

Synergies may help resolve financial woes. The Los Angeles Times and the Chicago Tribune found success by consolidating online and print editorial departments in addition to sharing correspondents. The Houston Chronicle and the San Antonio Express News agreed to pool their feature production, and four of New Jersey’s Gannett papers share copyediting and design departments.   MediaNews Group in the San Francisco area and papers in Ohio, Pennsylvania, Florida, Texas and New Jersey are in the process of pooling editorial resources. According to Project for Excellence in Journalism, these kinds of partnerships will soon become very important.

Many editorial goals can be met cheaper and more efficiently through the outsourcing of freelance journalists rather than editorial staff, although such movements require a larger effort to coordinate. This option has yet to gain much favor, and the market for freelancers continues to dry up.  Editors tend to choose the path of least resistance, reducing the budget for freelance journalists rather than laying off permanent employees.

The public’s willingness to cooperate in journalistic endeavors can be observed through the successes of community sites like Wikipedia and evaluation sites for hotels, manufacturers and restaurants.  Newspapers now regularly rely on crowd sourcing, for example the New York Times circulating dissident information in Russia and China.

As for collateral products, capital can be drawn from the brand value of a newspaper itself. This kind of additional business blooms more in Europe than in the U.S., yet criticism exists. Journalism professor Siegfried Weischenberg complains of  “the nonchalance with which high-quality newspapers promote side businesses with CDs and DVDs in their editorial pages.”

The “one size fits all” era of newspaper journalism has come to an end. Rather than reaching a broad mass-market, a differentiation strategy has become necessary. Director of the International News Media Marketing Association, Earl J. Wilkinson, states, “In the past where I saw one mass-market, today I see a hundred different niches.” In search of niches, even local geographical ranges split into additional virtual communities, which brings us to the often discussed notions of push and pull.  While the “old” mass media pushed products into the market, new so-called “long tail” companies treat clients as individuals for whom they offer mass-customization, or specialized online products.

A year ago, talk of paid news content nearly ceased, making the sudden revival of interest even more surprising.  While advertising revenue disappears like never before, influential voices in the industry attempt to turn back the clock. The New York Times and Time magazine have become notable pacesetters. Bill Keller, Executive Editor of the New York Times, hinted at plans to offer less content free of charge. Former Time Editor-in-Chief, Walter Isaacson, raved about micro-payments, saying, “The system fits all media forms: magazines and blogs, games and computer applications, TV news and amateur videos, pornography and policy analyses, citizen journalism reports, recipes from famous cooks and garage band songs.” Not only would traditional media land a chance for survival, micro-payment plans would also support bloggers and amateur journalists.  Perhaps the most feasible option would arrive via mouse click, in the form of a payment processing system – one that doesn’t require complicated personal data entries, account numbers or codes. Individual articles might be purchased for 10 or 20 cents rather than the exorbitant €2 some newspaper archives charge today. Online subscriptions, currently offered by the Wall Street Journal and smaller local papers like Idaho Falls’ Post Register, seem to be in fashion once again. Post Register publisher Roger Plothow explains, “Today more than 100 newspapers have online subscriptions and the number is growing.” Similar to monthly rates for television packages or cable, the introduction of a flat fee for online news access is also in the works.

Another promising solution lies in the prospect of making readers into co-owners.  Despite the presence of societal prerequisites, this concept is hardly discussed in the U.S., and far more Europeans take part in the economic system as shareholders. For years, Berlin’s left-wing alternative paper taz set the idea in motion, demonstrating success in collecting funds from its faithful readership. This is a propitious model where close ties exist between a newspaper and its readership. Mammoth papers like the New York Times, Frankfurter Allgemeine, and Neue Züricher Zeitung, however, will find audiences too diverse to allow for the organization of such unified actions. Economists like Mancur Olson found that willingness to contribute is more likely in small social networks than in large ones, where free-riding and the exploitation of third parties is prevalent.

Unlike Europeans, Americans invest little faith in their nation’s role as savior and regulator.  Consequently, the U.S. favors private non-profit initiatives over government subsidies as alternatives to the free-enterprise model.

Foundations are vessels of hope. Taking a page from large, private universities, wealthy citizens could potentially become benefactors and sponsors of independent journalism.  Financial experts David Swensen and Michael Schmidt estimated the costs for such philanthropy, using the annual budget of the New York Times’s editorial department for calculation. They found an endowment of five billion dollars would be necessary to pay out the $200 million Times budget. However, models that aim to relieve the editorial department’s budget without converting entire publishing houses into foundations are more realistic. One recent example is Pro-Publica (www.propublica.org ), an initiative supported by a millionaire couple sponsoring investigative journalism. The Huffington Post began a benefit fund for investigative journalism projects as well.  Foundations and benefactors, however, are prisoners of the “attention economy.” Promoting journalism is a risky undertaking for patrons, due to concerns about public manipulation and the abuse of power.

Efforts to raise funds by donation are more common. Freelance journalist David Cohn launched a website (http://spot.us ) that thrives on pocket change – micro-donations to benefit individual research projects. Cohn believes, for example, that many parents are willing to donate money for a reliable report on the pros and cons of local schools and their programs. This certainly seems to be a laborious way of fundraising – can we really rely on donations to permanently ensure quality journalism?

While nations of the European Union cry louder for public authority, America and Switzerland share a more skeptical view of government and bureaucracy. Envisioning a model based on the public broadcasting system in Europe, Ted Glasser of Stanford University has a plan for what might seem inconceivable to most Americans: a National Endowment for Journalism proposal, where government financing would arrive as a fund protected from direct political control. Glasser says, “We have to guarantee the survival of journalism as an institution.”

European Journalism Observatory co-founder and until 2018 Professor of Journalism and Media Management at the Università della Svizzera Italiana in Lugano. Frequent contributor to Neue Zürcher Zeitung (NZZ) and Der Tagesspiegel (Berlin), as well as to the specialist publications Schweizer Journalist and Der österreichische Journalist.
» Media Economics » The Million Dollar Question