Vice News: The Battle For Authenticity 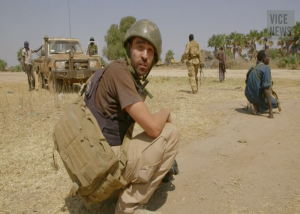 At a time when TV channels are experiencing a decline in ratings, newspapers are being told they belong to the past, and webpages are struggling to make money from online news, Vice News seems to have broken the code.

While many media organisations face an uncertain future, Vice News, a global online news channel, is attracting a growing audience of young people. Since its launch in March 2014 it has gained 1.3m subscribers on You Tube and 244 million video views, according to Kevin Sutcliffe, its Head of News Programming for Europe.

Sutcliffe said the viewing figures proved the Vice News had “captured the attention of a generation who have turned their back on mainstream news.” The channel, a division of Vice Media, has become the fastest growing digital news channel in the world, with offices in New York, London and Spain, as well as a new Paris bureau, Sutcliffe told an audience at the Reuters Institute for the Study of Journalism, University of Oxford, last week.

In his talk entitled The Battle for Authenticity, the Future of News, Current Affairs and Documentary, Sutcliffe said younger audiences now look for authenticity, rather than trust. “Trust was the conventional argument used by BBC and larger channels – that people would turn to them in times of crises,” he said. “That is not the case anymore. People now go to many sources. You can cling to the notion of trust, but trust is not enough now. It is about being there. It is about being authentic.”

The success of Vice News reflects a fundamental shift in where people get their news, Sutcliffe, former Deputy Head of News and Current Affairs at Channel 4 in the UK, said. “News today often breaks on Twitter, it doesn’t break in the newsroom. A lot of our journalists are expert on Twitter and in finding stories on Twitter. Social media is one of the main drivers behind the expansion of Vice News,” he said. “Being on the web has given us a whole new impetus. We are building out to people, we are not trying to bring people through our highly polished front door.”

Vice News is promoted as an alternative to the scheduled conventional storytelling on mainstream television. “If you look around, most news and current affairs are packaged sound bites that have to fit into a schedule. [On Vice News] I can run content as long as it deserves, if it works for seven minutes I can run it for seven minutes. That is a big change,” Sutcliffe said. “I don’t have to fill either a two minute or a one-hour slot.”

The digital news channel was set up to target under-35 year olds after Vice Media identified a market for news specifically aimed at younger people. “It is not that they were not interested in news,” Sutcliffe said, “it is just that we had failed to interest them.”

Part of the attraction for young consumers is that the channel is not heavily regulated, so it can show stronger material, he explained: “we are not gratuitous but we can show dead bodies, which you won’t see on a mainstream news channel or terrestrial TV because of regulation. We want to show the difficult things to watch, we aim for an emotional connection with people,” he said.

The channel tries to be “immersive”, “on the ground” and to show the world in a “raw and ragged way,” according to Sutcliffe. Reporters try to use the language young people understand. “The great thing is that the reporters are the same age as the consumers,” he said. “We ask our journalists to respond [to the situations they are reporting]. They shouldn’t just stand there too obviously rooted to the spot, but they should be telling what they have just learned, as they would to a friend.”

“If we go somewhere, it is to be on the street. Not to sit in the hotel room, but to find out what is going on…not to watch from a balcony,” said Sutcliffe.

He denied that this approach endangered reporters, or that Vice News was willing to take risks, either with staff reporters or freelancers. “I have been accused of outsourcing danger,” he said. “But we do the same risk assessment and processes that are followed by the BBC, Channel 4, CNN etc before anyone is sent anywhere,” he said, adding that Vice News does not accept work from freelancers unless it is arranged in advance.

However he acknowledged that the channel often sources material from social media platforms, such as Twitter and You Tube, but said considerable efforts were made to authenticate external content. “We spend a lot of time making sure it is real and that it hasn’t been photoshopped etc, we also have a fact-checking process,” he said.

Asked whether the channel focussed too much on immediacy, at the expense of context, Sutcliffe replied that reporters were encouraged to explain the background to events they were covering, but that viewers should look at the channel’s overall output for context and history. He denied that Vice News sacrifices political or news analysis for the sake of ‘clicks’ or ‘likes’.

Answering a question on whether Vice News is more entertainment than news, Sutcliffe said the channel wanted to make a difference. “We do investigations and we want to do more,” he said.

“It is not entertainment, we want to pull people in, but we want to have an impact,” he said.

Sutcliffe referred to a recent documentary, set inside the Islamic State in Raqqa. Medyan Dairieh, the reporter, spent three weeks embedded with the Islamic State, gaining unprecedented access to the group in Iraq and Syria, the first and only journalist to document its inner workings. The documentary has so far had between 15 and 20 million views.

Mah-Rukh Ali is a Norwegian journalist based in Oslo and Bergen and works for the largest commercial TV channel in Norway, TV 2, as their main anchor for the prime evening news at 18:30 and 21:00. TV 2 News Norway is the leading commercial news provider, and the evening news shows gathers 700 000 – 800 000 viewers.She has been a visible news personality on many events. Mah-Rukh did the debates and hosted the election programmes ahead of the parliamentary election in the fall of 2013 in Norway.Previously Mah-Rukh worked several years for Norwegian Broadcasting Cooperation as a reporter in both domestic and international affairs for NRK´s main news broadcast. She has been sent to cover political turmoil in Pakistan and Afghanistan many times. In 2006 she was recruited to the competitive channel TV 2 when they launched the first news channel in Norway.
» Latest stories, Media Economics » Vice News: The Battle For Authenticity