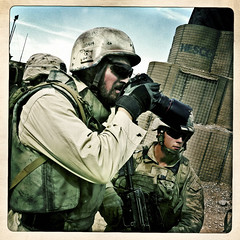 Is immersive storytelling the next big step in conflict reporting?

Dennis explains that it all started from the frustration of not being able to report the real sense of what he had experienced as a war photographer in Iraq and Afghanistan. “Even though my images and documentary film were published and distributed widely, they were still a passive window into the reality I was witnessing, constrained by the frame,” he says.

Wishing to remedy this limitation, Dennis developed Condition ONE, an immersive video tablet app based on a Canon digital camera with video capability that captures human eyesight and engages viewers by giving them control on what and where to look in a 180-degree field of vision. Condition ONE “involves very affordable technology that any professional filmmaker can buy,” says Dennis.

The French photographer Patrick Chauvel, who has followed wars around the world for forty years, was the first snapper to use this technology in the field. After meeting Dennis at a war correspondents awards ceremony and learning about the new app, Chauvel was eager to test it out. “It impressed me that someone who was a veteran of stills photojournalism would be so open to a new medium,” recalls Dennis.

The Condition ONE app, which was released in November 2011 and is free to download via the iTunes app store, comes with three short films shot by Chauvel. One of them is very raw, powerful footage he took on the front lines of the revolution in Libya in April 2011. The film came out several months before the app’s launch and drew the media’s attention towards the new technology.

Dennis predicts that the coming years will see “hundreds of millions of tablets” in people’s hands and that they will play a key role in changing the way one needs to think about content. “Eleven percent of US adults already own a tablet,” he says. “Media companies have realised they need to offer engaging content for these devices rather than repackaging old content in order to win over the new generations of users”. This means that photojournalists and filmmakers also need to keep up the pace with technological developments and learn how to use new devices that are coming out on the market.

An app such as Condition ONE implies a very different visual language behind the footage. “We have begun to develop the syntax and grammar for immersive storytelling,” explains Dennis. Framing is different, too. “You’re dealing with a different shape and different size image,” he says, “and it is very important to focus on the motion.”

“Filmmakers will want to get the most from the visual space so that users will be really able to explore a video,” he says.

All of Chauvel’s short films have one specific element in common: the lack of a strong narrative. It is all about a stylistic choice,” says Dennis. “Traditional voiceovers and standups can take away from the visceral experience that we’re trying to offer. There is a dynamic between narrative and interactive that needs to be carefully considered.”

Time Magazine describes the demo content as being “more akin to a video game than a television news story” as the video films are devoid of any voice over commentary and only give viewers the sense of being present on the scene. Documentary filmmaker Nadia Hallgren criticised in particular the film shot in Libya for the lack of in-depth information: “There was no story there,” an article in the New York Times quoted her as saying. “You can tell a good story in five minutes with traditional methods – here, I just got an experience.”

For Dennis, the aim is to convey emotions.  “This is possible thanks to technology today that gives us the chance to create highly immersive experiences by combining together the narrative power of the still image with the interactivity of virtual reality,” he explains.

Will Condition ONE mark the end of the still image? “I don’t think its power will ever diminish, but it will evolve,” believes Dennis, who sees similarities between our era and that of the 1930s, when television made its first appearance in a mainstream media landscape until then dominated by the radio. “It is where we are now, except that we are moving towards powerful software and devices that are bringing us a new medium with a huge storytelling potential.”

A new frontier in war reporting?

Although he can’t reveal any figures at this point, Dennis says Condition ONE received enormous attention not only from media outlets, but also from several publishers as well as companies in the entertainment industry and film production companies. “The combination of video and interactivity provided by the app offers great potential,” Dennis explains.

The next step will be to make the app available for Android tablets and mobile phones. “The price of these devices will only continue to drop,” says Dennis. “Mobile phones have proliferated across developing countries and users there will leap over the desktop computing era, directly into the mobile era,” says Dennis.

Does Condition ONE mark a new frontier in storytelling and war coverage or is it simply entertainment with a realistic thrill?

When the app was launched last November, someone tweeted: “Condition ONE, the war journalist game, is apparently available on the iPad.” An official reply was quick to arrive: “It’s not a game. We’re an immersive video tech company licensing software to media. Patrick Chauvel’s videos are documentaries.” The next generation of shooters will have the last say.

Article contributed by Fabio Forin, original can be found at the European Journalism Centre.