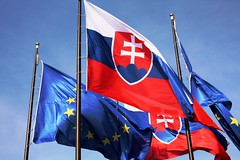 As of late, media-focused websites like the Nieman Journalism Lab and paidContent.org, have noted an interesting initiative launched in Slovakia. On April 18th, nine of Slovakia’s major media organizations (including daily newspapers, weekly magazines and a television station) partnered with the Piano Media platform to introduce a new payment system. Now, nearly all online content provided by such media companies is no longer available for free in Slovakia.

Users must pay € 2.90 per month (or € 0.99 per week) for access to 34 different sections and services offered by the nine publishers and broadcasters. Seventy percent of that amount is allocated to participating content providers. The remaining 30 percent covers Piano Media’s margin (approximately 5 to 10 percent) and the costs of financial transactions.

The rate at which individual websites are shutting down content varies (for example, there are differences in the ability to post comments and access to archives after a certain time). The pattern is entirely new  – and not only in the Slovak media marketplace.

According to Tomas Bella, the man behind the Piano Media project, the point of this initial phase is not to make money, but to transform the habits and attitudes of the Slovak media audience. The primary benefit for users is that they pay a reasonable price only once per month for access to a wide range of online content. This is considered the key argument in encouraging readers to subscribe to the service.

Of course, some are critical, or at least skeptical, of the project. According to Andrew Phelps from the Nieman Journalism Lab, it would be rather impossible to replicate the Slovak model in countries like the United States, as the size of the Slovak media market and language isolation are both factor into the model’s feasibility. Additionally, as Joshua Keating from foreignpolicy.org observed, in the U.S. such a initiative “would fall afoul of antitrust rules.”

Regardless, the Slovak experiment is an exciting development and we will follow its evolution closely.

Michal Kuś is the project director and editor of the EJO Polish website. He is also an assistant professor in the Department of Communication and Journalism (Institute of Political Science, University of Wrocław). His research focuses on media systems, with a special emphasis on media control, ownership and deregulation, the relationship between media and politics, and political communication.
» Digital News, Media Economics » The Slovak Model