Struggling to survive: the story of media startups in the Global South 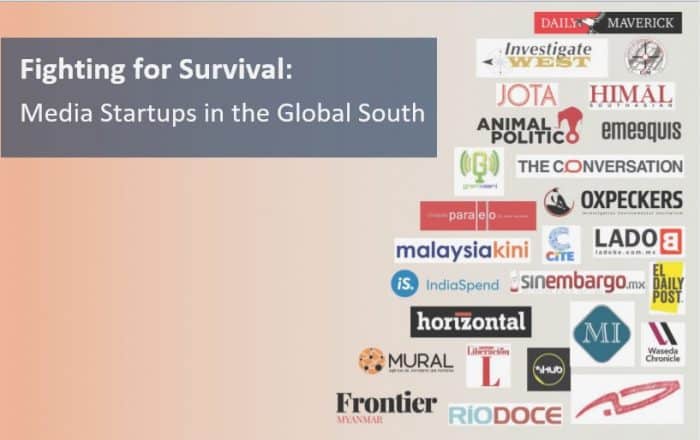 For many startups, achieving financial sustainability is a huge challenge

“Journalism seems to be commercially viable in the West, so it is assumed to be the same elsewhere. However, it’s really not the case in other parts of the world, especially in developing economies that lack scale”. These thoughts from Premesh Chandran, the CEO of the online news portal Malaysiakini, stand at the head of a new report, Fighting for Survival: Media Startups in the Global South which examines the obstacles facing news outlets in developing countries.

Fighting for Survival is a follow up to an earlier report, Publishing for Peanuts (2015), in which Anya Schiffrin, J.J. Robinson and Kristen Grennan – all then professors at Columbia University’s School of International and Public Affairs – looked at 35 journalism startups in countries from the Global South.

Three years later, Schiffrin and a new team of collaborators went back and took another look at the individual experiences of this group of “muckraker” or investigative journalism outlets, exploring their survival strategies in various political and economic circumstances.

The media projects interviewed by the team include South Africa’s Daily Maverick, Zimbabwe’s Center for Innovation and Technology, Kenya’s IHub, Jordan’s 7iber, Sri Lanka’s Himal Southasian and Mexico’s El Daily Post. Most of these startups depend mainly on the internet and mobile services for disseminating information.

The research team interviewed 21 outlets that had taken part in the 2015 study plus five new outlets. It discovered that three of the original startups had failed, while six had been seriously reconfigured or renamed. There were various reasons for this. The main challenge facing most of the startups was financial sustainability. In addition, political risk and the physical safety of journalists were of particular concern for emerging media outlets in countries such as Mexico.

Most of the startups experienced a continual struggle to find reliable sources of funding. The unreliable nature of advertising revenue and crowdfunding means that most have come to depend on donations as their main source of funding. However, keeping donors committed in the long term presents a new kind of challenge. Six organisations out of 17 who responded to a question on whether their income covers their expenses said that it did not. Ten of the media outlets surveyed had hired staff dedicated to fundraising and writing grant proposals.

The authors of the report prefer to use the word viability rather than sustainability to describe the long-term survival prospects of startups. In their view, with sustainability the focus is on whether an outlet can turn a profit, whereas viability covers more than the purely financial aspect – it also relates to an outlet’s integration into its community. The interviewed startups were motivated more by a desire to serve their communities than to make money. However, such good intentions are not in themselves enough to guarantee survival.

In this context, Peter Deselaers, Kyle James, Roula Mikhael and Laura Schneider consider the approach advocated by the Deutsche Welle Akademie, which takes into account five different aspects of the media environment (economic, political, content, technology and community), as a model example of how to promote media viability. In their view, media outlets that succeed in achieving a balance between these aspects have a better chance of survival.

The report calls for the setting up of an industry-wide body to help small outlets acquire fund-raising skills (including fund-raising on an international scale). It also underlines the necessity of having some kind of global media funding initiative, and highlights the invaluable role played by the Global Investigative Journalism Network (GIJN) in supporting emerging media projects by helping them to devise business strategies.

The founders and editors of the startups themselves also have some tips to offer to newcomers in the field. Several of those interviewed for the report stressed the importance of thinking about business from day one and having a clear long-term financial plan. Octavio Rivera López, the former editor-in-chief of Mexico’s El Daily Post, warns new startups not to make the mistakes that led to the failure of his outlet. Reflecting on the lessons learned from his experience, he concludes:

“You have to think about not just one source but various sources of income. You have to look for grants—not just ads or product sales. You have to know that projects take time to mature. You have to have money to survive. Smaller is better. You have to start small and then grow as you can”.

Image: Cover from report “Fighting for Survival”, published by the Center for International Media Assistance (CIMA)

If you liked this story, you may also be interested in The Story of Investigative Journalism in Africa.

Rana Khaled Arafat is a PhD student in media and journalism at the University of Lugano, Switzerland. She is also an Assistant Lecturer at the Faculty of Language and Communication at the Arab Academy in Cairo. She holds a master's degree in international journalism from Cairo University.
» Business Models, Media Economics, Recent, Research » Struggling to survive: the story of...