Albanian Media and the Local Market 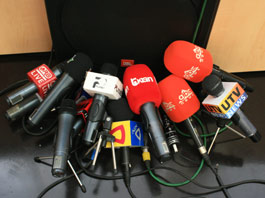 The changing political system in Albania is tied to the evolution and transformation of the media industry.

The establishment of political pluralism and a market economy in 1991 brought with it the collapse of the state’s monopoly in the Albanian media market. This transition from a centralized system to a private media system was accompanied by fundamental changes in the market. In contrast to the former communist East, where the transition from controlled media markets to free markets occurred in a gradual manner, in Albania this change took place abruptly.

Thus, during the years of 1991-1997, almost all of the newspapers and magazines controlled by the communist state disappeared from circulation (with the exception of the newspaper Zëri i Popullit, the main paper of the communist party in power), and in their place emerged new newspapers which functioned primarily as private businesses. These new media businesses fundamentally transformed the landscape of Albanian media. Before 1990, only two daily national papers were printed: Zëri i Popullit and Bashkimi. In 1991 four daily papers were printed, and in 1994 that number doubled to eight. Today 28 national dailies are printed – a considerable figure when compared to the number of print media publications  in countries with populations much larger than Albania’s.

The same pattern occurred in the audiovisual market where the only state radio-television outlet, RTSH, is dominated by a large number of private television and radio stations that have overtaken the Albanian-speaking media. According to statistics from Keshilli Kombetar  i Radios dhe Televizionit (KKRT – National Council of Radio and Television), in Albania today four national television stations are in operation, 65 local stations, 33 cable television stations, three national radios stations and 47 local radio stations.

A market with minimal regulation

The boom of private media has brought a state of chaos to the media market. The fact that the legislation in this field still has many gaps contributes to this phenomenon. The state has not attempted to play its full role in a market that developed rapidly and has the tendency to bypass regulations. This somewhat anarchic situation has been especially visible in the field of electronic media. While newspapers and magazines have begun registering to become legally licensed as private businesses, electronic media have started their operations without legal licenses from the state.

One of the primary traits exhibited in Albanian media is a lack of financial transparency. From the moment they enter the market, private media businesses do not declare their investments. This causes periodic imbalances, as large investors from other fields systematically enter the market and alter the media landscape. This has occurred periodically with the involvement of construction businessmen like Koço Kokëdhima, Irfan Hasanbelliu, Genc Dulaku, as well as coffee businessman Dritan Hoxha – who instantly created new media outlets which became the most important in the country. As a result of the powerful investments of the first two businessmen (Kokëdhima and Hasanbelliu), their respective newspapers are the have the largest circulations in the country, while Dulaku and Hoxha have two of the largest Albanian private television platforms.

Competitive new businesses that enter the market frequently alter the tendencies of the media market. The newspaper Shekulli, entered with a price three times lower than the other papers. It sold for 10 Lek (approximately 70 cents), while the other newspapers sold at a price of 30 Lek (210 cents). Later on, the newspaper Panorama followed the same path. This, in turn, caused the other owners to react by seeking legal protection from the Competition Authority. Though such an imbalance in price cannot be justified – even by the cost of printing (which is almost equal) or market sales – it is explained by the fact that the publishers of some newspapers cover printing costs with profit arriving from other businesses.

In the field of television media, imbalances in the media market are mostly reflected in advertising costs, as well as program content. Various television channels have been unable to accept the prices of commercials. On August 5, 2003, the directors of five main television channels, RTSH, Klan, Vizion Plus, Top Channel, and Arbëria signed a memorandum of cooperation for the setting of identical  prices for television advertising. According to this memorandum, every 30-second commercial spot transmitted on channels of the five signees would cost 100 Euros. In spite of this, however, the memorandum has remained unimplemented, as each channel applies its own fees.

Such lack of respect for rules is also shown in the financial treatment of  journalists and technical personnel.

The salaries of journalists vary drastically from one media outlet to another as a result of competition: Top Channel and Vizion Plus pay salaries two or three-times higher than the other outlets which suffer economic difficulties. The salaries of television journalists are also much higher in comparison to those of print or radio journalists.

Since 1992, there have been continuous attempts to establish regulations in the media sector. In many aspects, the market today is more stable than the situation a few years prior; yet in spite of this, it remains erratic, unstable, and to a certain degree, informal.

A small market in crisis

With a population of roughly 3 million residents, Albania remains a small and unfavorable market for media. Small markets create ample obstacles for the consolidation of media businesses, as the cost of their products is practically the same as those produced by media operating in larger markets, while the profits remain much smaller.

However, apart from the question of size, the Albanian-speaking media markets are also fragmented due to the liberal politics practiced by the Albanian government in the media field. A large number of actors – which have a very positive effect on the pluralism of Albanian media – operate in these markets but also fragment the media. Regardless of the creation of media groups in which consolidation can be observed, the market remains significantly spread out since concentration has not resulted in the closing of the other businesses. The difficulties of a small market are not only reflected in the low circulation of Albanian papers, but also in the minimal amount of advertising in electronic media (accurate audience measures for such media is still lacking).

The long crisis of print media

Print media, which was the first private media form in Albania following the fall of communism, has experienced a long crisis that continues today.

In the first phase (1991-1994), print media outlets enjoyed favorable financial conditions because  they were financed primarily by political parties, and as a result, had three stable financial sources:

There were other advantages as well, the first being a large, stable audience—a significant component of which corresponded to the electorates of political parties. In addition, the parties spent a portion of their budget on print media, as at the time this form of media was still the most powerful in Albania.

The first large daily papers that emerged after 1994 were faced with great difficulties. Due to the low salaries of journalists (50-250 Euros)[KN3] , the prices of these papers were much lower and barely covered the costs of production.

Other than production costs, a significant portion of the total cost of newspapers and magazines is allocated to intellectual production, a term used by Nadine Toussaint-Desmoulins in L’Economie des Médias. This cost has increased continually because of the raise in average Albanian income. In addition, the competition to attract the most qualified professionals has contributed to the increase of income, which has become a burden in the fragile economy of Albanian print media.

The economic state of print media in Albania is greatly challenged, which in turn results in unstable media businesses with a lower chance of survival. The majority of businesses have, in fact, negative balances and if the laws of economic balance transparency and bankruptcy worked as intended, many of these businesses would be forced to shut down. This situation is compounded by the small advertising market in Albania.

The boom of audiovisual media

The investments in these television stations have made them competitive in three areas: broadcasting technology, production of programs, and human resources.

Technological investments include the building of broadcasting studios and broadcasting systems. Until 1997, the biggest investor in these two fields was Radiotelevizioni Publik Shqiptar (RTSH, Albanian Public Television), which was the only broadcaster in the entire Albanian territory. Still, however, with regard to technology RTSH was very far behind. The cameras and the editing studios of RTSH are still those imported from Eastern Germany between the years of 1985-1990.

The main source of revenue for Albanian television comes from advertising. Out of $15,666,000 spent on advertisement in Albania for the year 2004, $8,500,000 went to television advertising. This amount is not dispersed equally, however, because the main television stations receive the majority of advertisements from businesses and the government. The remaining production costs are covered by other financial sources. Some TV channels like TV Arbëria have foreclosed, while others are experiencing ongoing financial difficulties, which are reflected in unpaid staff salaries.

Radio businesses are more modest, but also more stable than television businesses. Though the majority of radio outlets are faced with a shortage of funds, they have much lower costs than other media, as their programs mostly consist of news taken from the Internet, talk shows with callers, and music programs. Meanwhile, staffing costs are low and technological investments are also not very expensive.

The nature of Albanian media is largely defined by the nature of the media owners. As a result of the radical liberalizing reforms, the Albanian media market, as well as all other markets, has quickly become dominated by the private market. Private media has considerably balanced the role of the public sector. The Albanian public radio-television has remained an unreformed media institution and is still quite similar to the state radio-television of the past. Its reliability and ratings are consistently decreasing and it is now mostly watched in rural areas.

Contrary to most European countries where legislation prevents the concentration of media in the hands of a single owner, in Albania and Kosovo this sort of phenomenon is allowed. As a result, in the Albanian-language media markets one can witness the consolidation of various media, and the creation of powerful media groups controlled by a single shareholder. Furthermore, Albanian legislation does not prevent other businesses from investing in the media industry.

Internet and new technology are the only sources of media with an open perspective and a common space for communication in the Balkans. Online communication bypasses the constraints of traditional media. In spite of this, in comparison to other countries in Europe, the accessibility of Internet and new communication technologies to the population is still small. The high costs stand in contrast to the low purchasing power of the Albanian public. The prevalence of Internet is compromised by the low economic level of the population and the lack of landline telephone infrastructure—a gap that is even more visible in rural areas. Despite remaining in infancy, new media outlets have increased in prevalence at a continuously increasing rate and within a short time are expected to emerge as competitors to traditional media.

In light of the above, it can be said that the Albanian media landscape is one marked by great challenges—challenges that have been, in part, faced successfully, although they are intertwined with the communication, democratization, modernization and integration of Albanian society. Facing such challenges will be the true test of the Albanian media system.

This article was written specifically for EJO by Dr. Mark Marku. Dr. Marku is a professor of media and communications at the Department of Journalism and Communication, University of Tirana. He has published several books on the history of the Albanian media and on  issues  of media semiotics and which have been translated by many Western authors in the field. Currently Dr. Marku is a Member of Albanian Parliament, and Vice-President of the Parliamentary Commission of Education and Media.

» Ethics and Quality, Media and Politics » Albanian Media and the Local Market