Reporting Europe: Why Journalists In Brussels Should Get Out More 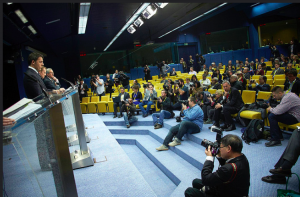 There are few views that are more unanimously shared by all European journalists than this: it is close to impossible to report well on the European Union. The bureaucratic monster only makes great news when it fails, and even then either you, your editor, or your audience will misunderstand the reasons why.

So no wonder so many Europeans have little clue about why the whole thing exists.

Bill Emmott, author, film producer and the former Editor of The Economist, sees the challenges of reporting the EU as a possibility rather than a problem.

According to Emmott, there are several factors that make the union especially hard to report on. In essence, he says, the union could be seen as “a project to destroy the news”, since it aims to negotiate the tensions between the European nations – the same tensions that often make the news.

Finally, there is a problem with creating a strong Pan-European media because of the absence of a Pan-European advertising market. The Economist succeeded in attracting several elite advertisers, Emmott says, but the majority of multinational companies still market nationally.

“The recent crises – first the Euro crisis, then the refugee crisis, and lately the terrorism crisis – should have made Europe easy to report”, Emmott says. “But still, the overall conclusion must be that the reporting has essentially only been ‘national plus’.”

According to Emmott, when it comes to the Euro crisis, the problem has been that “those on the front line” are rarely economics specialists. Economics experts tend to focus on national economics, and thus tend to take the national angle.

Why, then, does Emmott hold an essentially optimistic view, seeing the state of reporting Europe as a possibility? And how can the news media improve their reporting?

In Emmott’s view, both editors and reporters covering the EU need to change. The Brussels correspondents need to get out more, spending time on the road and back in the home country, so as not to get trapped by the Brussels bubble. Editors, in addition, need to ensure that European stories have a national angle, and that national stories have a European angle. The national and the regional are intertwined, but often journalistic practices keep them separate.

Moreover, Emmott is hopeful that recent developments in the media may lead to better reporting on the EU. Firstly, the shift from advertising-funded to subscription-based media may make the forming of a Pan-European media economically possible. Secondly, the social media has already formed specific public spheres that are not defined by national borders, which may have consequences for the news industry too. And lastly, the difficulty of reporting important regional issues within Europe creates great opportunities for any journalist or media to differentiate itself from the rest.

“It may be hard to get heard, but when you get heard, it is of a very high value to the reader”, Emmott says.

Ville Seuri is an assistant chief subeditor for the newspaper Helsingin Sanomat and was a visiting fellow at the Reuters Institute for the Study of Journalism 2015–2016.Seuri currently works for the Finnish newspaper Helsingin Sanomat, where as one of three assistant chief subeditors, he leads a team of subeditors and layout designers in composing the news sections for the daily paper.
» Media and Politics, Short stories » Reporting Europe: Why Journalists In Brussels...