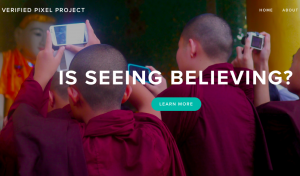 Verifying digital photos, streaming TV news and developing 3D visualisations: journalism – along with the battery-powered driverless car and the ‘internet of things’ – is constantly being reinvented in Silicon Valley.

The John S. Knight Journalism Fellowships at Stanford, one of the world’s most prestigious education and research programmes for journalists, has become an experimental lab for entrepreneurial journalism. It fosters journalistic innovation and social entrepreneurship – encompassing both business and public welfare initiatives – by giving up to twenty international reporters the space and resources to research and test their ideas each year.

Last summer I was given privileged access to the programme and a chance to learn about some of the most innovative work developed there over the past few years.

This project is designed to help newsrooms verify the authenticity of user-submitted digital photographs. Nowadays, anyone with a smartphone and Photoshop can become a photojournalist.  Newsrooms face the challenge of verifying manipulated images from the original, according to Samaruddin Stewart, a Knight Fellow in 2013.  Stewart co-founded a start-up project, Verified Pixel, to enable newsrooms to verify the authenticity of unsolicited photos. It merges different software programmes into a single workflow. It also aims to identify manipulations in an easier and a more reliable way. On the technical level, the project is highly advanced and is being marketed.

Adriano Farano, class of 2011, co-founded Watchup, an app that personalises and streams TV news to American news junkies from over 200 local, national and global TV stations. Nieman Lab has described Watchup as doing for TV news what Hulu does for television, and Netflix for movies.

Andy Donohue, another 2013 Knight Fellow and a former editor of Voice of San Diego, used his time at Stanford to work on a project he has integrated into some of his current work as a senior editor at the Centre for Investigative Reporting (CIR), based across the San Francisco Bay from Stanford. Scratch is a framework for investigative journalism that uses design thinking and a form of local journalism which combines thorough investigation with community building. The newsroom turns into an active participant of local affairs, helping to identify the problems of daily life “bottom up” instead of “top down” by making them public, and by requesting the involvement of citizens while working on solutions.

Matter: mentoring and support for startups

Like the Stanford fellowship programme, Matter is an incubator. The San Francisco company, co-founded by Corey Ford and funded by the Knight Foundation, is a start-up which advises other start-ups.  Teams are selected for a four-month programme of mentoring, funding and training, as they develop and test their prototypes.  Matter is designed to complement the fellowship programme by giving fellows the time and space to develop their ideas.  According to James Bettinger, director of the John S Knight Journalism Fellowships, “ten months are too short to re-invent journalism or even just to put a company on the right track”.

A unique chance to soak in the spirit of Silicon Valley

The year at Stanford gives all Knight Fellows a chance to work in wonderful surroundings, to connect with researchers, entrepreneurs and business angels and to be influenced by the innovative spirit of Silicon Valley.

Two other universities offering outstanding continuous education programs for experienced journalists have also reacted to the pressure to innovate in the media, although in different ways.

At Harvard University, Nieman Fellowships aim to give elite journalists the opportunity to recharge their batteries. The founding of the Berkman Centre for Internet and Society (1998) and of the Nieman Lab (2008) created places in which intense thinking about the future of journalism can take place.

The Reuters Institute for the Study of Journalism, (where the EJO is based) was founded in 2006 at the University of Oxford. Mid-career journalist fellows from all over the world are invited to the Institute to address the future of journalism in research projects.

Stanford’s advantage however, is its Silicon Valley location. Operating right next to the teenage giants Facebook and Google and hundreds of as yet unknown internet startups is a unique opportunity for Fellows. With the focus on innovation, entrepreneurial spirit and leadership, there is an optimism in the air, which can only be found in such high concentration in the San Francisco Bay Area.

Journalism is being disrupted as advertising and revenues decline

The optimistic spirit extends to James Bettinger’s view of the future of journalism. He believes the media landscape is still full of opportunities, although he acknowledges journalism is being disrupted in the US as financial support from advertising revenues fades away.

One of the best examples of the downfall of a legacy newspaper can be found on Stanford’s doorstep. Fifteen years ago the San José Mercury News was considered a prototype of daily newspapers that had creatively managed the switch into the digital era.

The newspaper employed 470 journalists in the newsroom at that time. James Batten, then CEO of Knight-Ridder, which owned of the San José Mercury News, had had the foresight to move the company headquarters from Miami to San José and open an expensive research lab, to prepare the publishing house for the future. But his successors unfortunately later sold Knight-Ridder to a smaller competitor, McClatchy. It was an over-ambitious acquisition by McClatchy, which immediately fell into debt and filleted the company, selling it off in pieces, including the San Jose Mercury News, which now employs only 70 journalists.

However, a piece of this once proud company’s name is likely to survive the tough times thanks to its patron, John S. Knight. As the namesake of Stanford’s fellowship programme and the foundation program for the reinvention of journalism he has earned a place of honour in the ancestral gallery of America’s most creative publishers, publicists and philanthropists. His portrait could hang proudly beside that of the newspaper tycoon Joseph Pulitzer, who founded the Columbia School of Journalism and the Pulitzer Prizes a century ago.